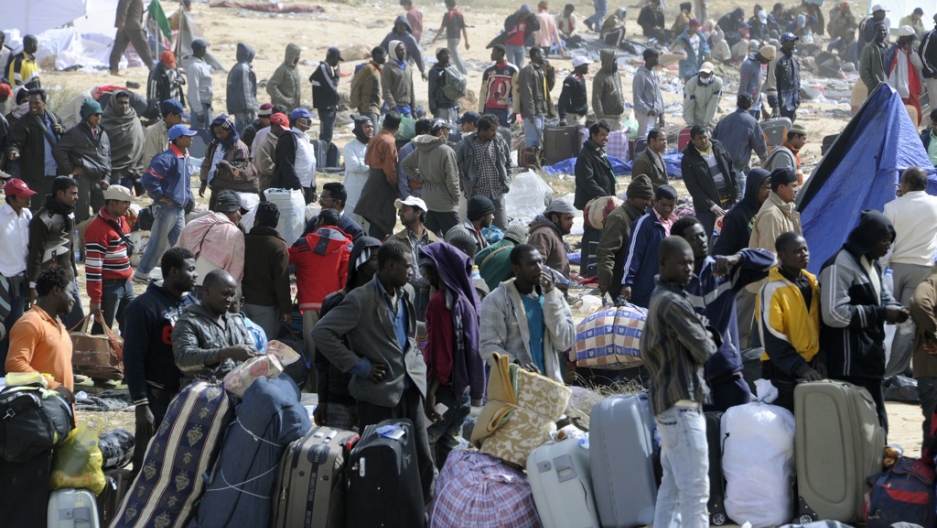 Refugees line up in a field covered with garbage as they wait to get on a bus to the Jerba airport at the Tunisian transit camp of Choucha on March 16, 2011. The United Nations said on March 10 that more than 250,000 people had fled Libya to neighboring countries since the revolt against Muammar Gaddafi started in mid-February.
Credit: Dominique Faget
Share

TUNIS, Tunisia — Tunisia is struggling to cope with the thousands of refugees fleeing the violence in Libya.

At first, tens of thousands of foreign workers streamed across the Tunisian border. They were immigrants working in Libya from Bangladesh, the Philippines, Nigeria, Mali, Liberia, and many other countries.

In recent days, a second wave of refugees has arrived in Tunisia: Libyans who are escaping the violence and possible retribution from the forces loyal to Libyan leader Muammar Gaddafi.

"We are now seeing Libyan families who run away. So we are not only talking about foreigners who want to return to their homes, we have real refugees. These are people who do not have homes to come back to," said Kristalina Georgieva, the European Union's commissioner for humanitarian aid.

About 280,000 people have left Libya since mid-February and more than 150,000 have come to Tunisia and 118,000 to Egypt, according to the United Nations High Commissioner for Refugees. The refugees are still arriving in large numbers, presenting Tunisia's transitional government with a humanitarian emergency.

"We will work on deciding how we can direct our help toward the changing situation," Georgieva said. She urged the international community to prepare for a massive outpouring of Libyans escaping by sea.

According to Georgieva, the international community is making a concerted effort to help repatriate the immigrant workers but thousands of refugees remain stranded in Ras Ajdir, the main border post between Tunisia and Libya.

“There are massive hygiene issues and the associations have a hard time coordinating their efforts,” said Nidhal Chemengui, 24, a Tunisian volunteer. “Refugees are impatient to return home.”

Many of the 20,000 Tunisians that returned were able to rejoin their families. But the rest frantically sought shelter, food and sanitation. The Tunisian military escorted the foreign migrants to a camp located seven miles away in Choucha. Some were also sent to the Djerba airport and Zarsis seaport, where they could be repatriated.

The situation is “a logistical nightmare,” said Antonio Guterres, the United Nations High Commissioner for Refugees. The World Health Organization warned about the risk of epidemic and advised aid workers and officials to wear protective masks and latex gloves.

A majority of the refugees, after a long and painful journey, are patiently waiting for their governments to repatriate them. Others, mostly from Nigeria, Somalia and other politically troubled African countries are hoping to get asylum in Europe — or stay in North Africa, which has traditionally been a jumping off point for illegal immigration into southern Europe.

The World Food Program launched a $38.7 million operation to feed refugees in Tunisia, Egypt and Libya. The European Union committed about $42 million in aid to address the refugee crisis.

In addition to the tents and humanitarian aid provided by the United Nations and the Red Cross, the Tunisian people have organized substantial solidarity movements to help the refugees. Many initiatives were taken on social networks to organize food and clothing drives and transport volunteers from different towns in Tunisia to the refugee camp.

Young Tunisian volunteers, including medical school students, have been helping clean up the camp, making food or simply providing psychological support to the refugees.

“We cleaned some areas of the camp and moved the military hospital because we had to keep it in a central place,” said Ali Mnif, a 24-year-old aid worker from Tunis.

The crisis is far from over.

Iheb Saidi, 25, a computer scientist, has been going regularly to the refugee camp to help install telecommunications equipment. He also volunteered with the Tunisian Red Cross and spent time discussing the situation with the refugees.

“A man from Mali told me that he would be happy staying here eating and sleeping for free because in Libya he worked all the time and very hard to get the same result,” Saidi said. “Another man from Somalia said that he wishes he would settle at Ras Ajdir because he can’t return to his home nor go back to Libya.”

A woman who arrived in Tunisia said she does not want to return to her home country, Somalia. "It is dangerous to go back. In my country what will be waiting for me is hunger and instability. My country is not safe and I do not want to go back," Khadija Sheikh Ali, 24, from Tripoli, told Reuters.


"Here I have food and clean water and it is safe, why should I go back? We call on the world to help us," she said. "I do not care where I go next as long as they do not send me back to Somalia, I have nothing in Somalia."