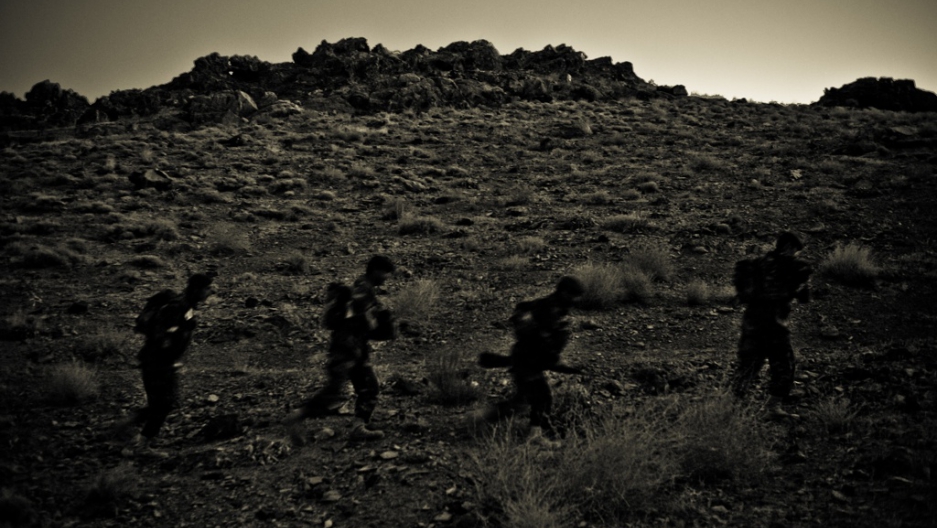 NAWA, Afghanistan — It was two o’clock in the morning on Feb. 15. Mullah Abdul Khaliq, who taught at a local school here in Nawa district, was asleep with his family when the helicopters began circling overhead.

“We could not leave our houses,” said Abdullah, a neighbor of Mullah Khaliq’s. “Everyone understood that the U.S. forces were carrying out a raid somewhere, and we were all afraid. In the morning we found out that something was very wrong at the house of Mullah Khaliq.”

U.S. forces had broken into Khaliq’s house and what happened next is an all too familiar scenario to the people of this beleaguered district, which has now been caught for almost two years between the Taliban and the U.S. military.

“The wife told me that her son ran out of the house and was shot on the spot,” recounted Abdullah. “They then asked Mullah Khaliq if he was Taliban. He said ‘no we are not,’ but they searched the house and shot him in the head. His other son is missing. We saw blood, he must have been injured. His nephew, who was visiting, was also killed.”

One of Mullah Khaliq’s sons was a student at Kandahar University. The other son and the nephew were seniors in high school.

Nawa district had been under Taliban control until the summer of 2009, when the U.S. Marines went in to clear it. With overwhelming force they were able to pacify the area, driving many Taliban to Pakistan, while others simply blended back into the population.

Now this largely agricultural district, once a no-go zone rich in opium poppy, is billed as a rousing success.

“The turnaround in Nawa district over the past 20 months demonstrates what is possible in Afghanistan when all the elements of the counterinsurgency strategy come together correctly,” wrote Rajiv Chandrasekaran, a journalist with the Washington Post, in a policy brief published in March by the University of Ottawa’s Centre for International Policy Studies.

“Nawa now is one of the safest districts in southern Afghanistan. Marines who live at a base in the district center have not fired a single bullet while on foot patrol in the past six months. School classrooms are packed. The bazaar is thriving … COIN [counterinsurgency] strategy concentrates not on hunting down guerrillas but on protecting the civilian population from insurgents.”

But persisten night raids by U.S. Special Forces now appears to be threatening to erase that sense of security. Many civilians here said they feel like they need protection from the protectors.

The night raids, in which U.S. Special Forces target people they believe to be known insurgents for kill or capture, they say, are making everyone nervous.

“It was two in the morning when U.S. forces and the Afghan Army surrounded my house,” said one Nawa resident, who spoke on condition of anonymity because he feared retribution from U.S. forces.

“I was sleeping with my children when suddenly my wife said somebody was in the yard. They blew down our door and came into the house. I told them in broken English that there are only children and my wife here, but they took me at gunpoint and handcuffed me and put a black hood over my head. They took me to their helicopter … I didn’t know where I was, but after two weeks of interrogation I was released and I found out that I was in Garmsir.”

Garmsir is another district of Helmand, about 20 miles south of Nawa.

Maj. Timothy James, an American military spokesman at the International Security Assistance Force Joint Command Media Operations Center, confirmed that night raids were continuing in Nawa, but denied that they were increasing in frequency.

“Ops are ongoing,” he said. “There has been no change in operational tempo.”

According to James, the four people who were killed in Nawa the night of Feb. 15 were supporters of the insurgency. He said that the name of the target was not Mullah Khaliq, but he would not identify the actual “objective.”

“We targeted a known Taliban facilitator,” he said. “We also killed three others who posed a clear security threat.”

Daud Ahmadi, a spokesperson for the Helmand governor, said he could not comment on whether or not the family had links to the Taliban. He did not deny that the U.S. forces sometimes got it wrong.

“Raids and attacks are not 100 percent accurate,” Ahmadi said. “Often innocent people get arrested, but they are released immediately. We have operations in Nawa against the insurgents, and the enemy is also operating secretly, but that is not a concern. I assure the residents of Nawa that the Taliban are very weak now.”

According to the New York Times, Nawa has become so stable that the U.S. military is considering moving troops from there to Sangin, a district in northern Helmand that is one of the most violent in the province.

The Taliban, predictably, reject such characterizations.

“We are not weakened, we are getting stronger,” boasted Taliban spokesman Qari Yusuf Ahmadi. “The residents want us here. The Americans arrest innocent people and torture them … if the number of their troops decreases they will not be able to spend a single day here.”

Mullah Roze, a local Taliban commander in Nawa, also portrays Taliban operations as successful. The insurgents are aided by public anger over the night raids, he adds.

“We are not afraid of the Americans,” he said. “Our teams are getting together again, because the Americans have become brutal. People are sick of this situation and they are happy that we are back.”

The Taliban mix freely with the residents of Nawa, but it is far from clear how welcoming they are. Rubbing elbows with the insurgents can be dangerous business, earning one a visit from the feared Special Ops brigades.

“The Taliban come to people’s houses every night," said Nasratullah Baheer, a doctor from Nawa. “Some welcome them, but others are afraid of the U.S. forces. Recently they carried out many night raids and arrested many innocent people.”

“The Taliban are humans like us, they sit and talk with people, nobody can tell them to go away,” he said. “But that does not mean we support them. The only ones who support the Taliban are those who are wealthy enough to do so.”

Abdullah is bitter about the loss of his friend.

“The family barely had enough money to live on,” Abdullah said. “How could they support the Taliban? This is the habit of U.S. forces. They kill innocent people. Then they accuse them of having relations with Taliban. Who can prove this? I’ve been his neighbor for 10 years, if I don’t know then how can these Americans? People have disputes here and they give false information to the U.S. forces, who then kill or abduct people without any investigation.”

Maj. James insists that the military acts only after receiving credible intelligence. He also emphasizes that mere association with the Taliban is not enough to earn someone the dreaded label of “facilitator.”

“A facilitator is someone who routinely supports people carrying out the insurgency,” he said. “In isolation, [giving someone a meal, or drinking tea] does not make one a facilitator.”

Abdullah Jan, another resident of Nawa, is happy to see the U.S. forces in his home district. He just wishes they would stop harassing the local populace.

“If the Americans would lower their aggression in the district, their presence would be appreciated,” he said. “They should not annoy people by acting on false information, but still it would be better if the U.S. forces stay.”

Abdullah Jan is not a fan of the Taliban, and he likes the U.S. “cash for work” programs that hire local residents to do manual labor.

“If today the U.S. forces withdraw from Nawa, the Taliban will come back and we won’t get anything good from them,” he said. ”The Taliban are just a problem for us. After the U.S. forces came we discovered the real meaning of life. Now they have started night raids and the people are turning against them, but still our life is better now. When the Taliban were here before, we didn’t have anything except farming, but now we can clean canals and ditches and the Americans are paying us 500 afghani [about $10] per day.”