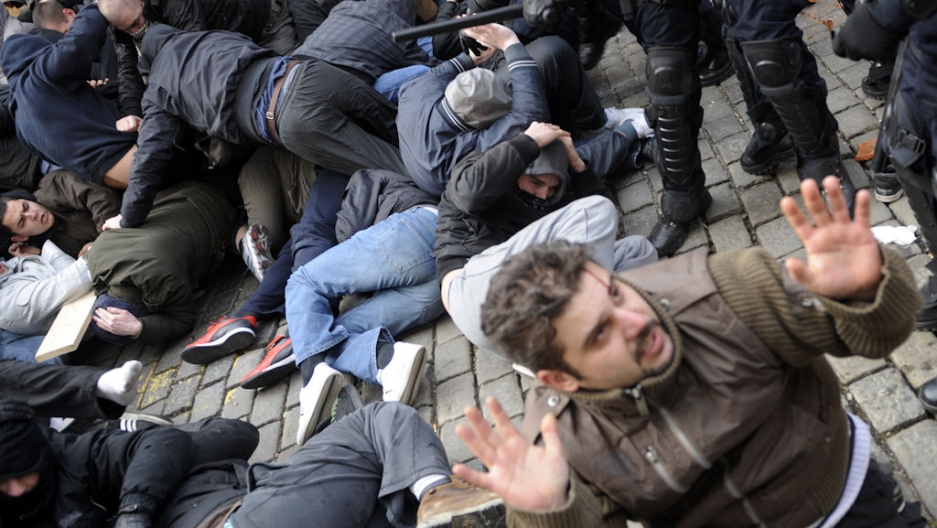 Policemen clash with protesters during a demonstration in Zagreb on Feb. 26, 2011. Hundreds of anti-government protesters clashed with police leaving 33 people injured while several dozen were detained.
Credit: Hrvoje Polan
Share

ZAGREB, Croatia — Thousands of anti-government protesters inspired by the people-power shown in the Middle East and North Africa have gathered almost every day here for the past few weeks. Now the demonstrations are spreading to all major towns and cities in Croatia.

The route of the capital's march changes from day to day. It has taken in the government buildings, the central bank and the offices of a newspaper publisher some think is too close to the government. Last Friday the march stopped for a minute's silence outside the Japanese embassy in solidarity with the victims of the earthquake and tsunami.

It would be a stretch to say the demonstrators have a unified message other than a call for snap elections. Those calling out slogans have to battle the booming drum of Luka Hodak, a self-styled mystic shaman. A diverse range of organizations are involved in rallying the crowds, with Facebook their only common ground. Among them are the Bad Blue Boys, which prides itself on violence in the name of Dinamo Zagreb football team, war veterans, the Young Antifascists, Red Action and a Network of Anarcho-Syndicalists. Few of the marchers belong to any of them.

Groups involved in coordinating the marches, at both ends of the political spectrum, are opposed to Croatia joining the European Union, but few of the marchers are stirred by the issue. "I've nothing against joining," said 26-year-old Luka Filipovic, who has protested every day. "I do!" said Sandra, 21, Filipovic's girlfriend, although they do agree that EU membership is not a crucial issue for them. Croatia hopes to close its EU-entry negotiations in June and call early elections soon after.

The protesters share, however, a conviction that their state is rotten and they want elections now. "A new system" would be the outcome of a ballot, said Ivan Pernar, a 25-year-old nurse and self-taught economist who thinks the answer to Croatia's problem lies in a form of monetary sovereignty. He was the protest's media darling for a few days, but then newspapers' interest waned and his fellow protesters grew weary of hearing about monetary policy through a megaphone.

Pernar spent two years with the Green Party, but grew disillusioned with their social priorities and lack of economic focus. He is now more in the thrall of Dutch Islamophobe Geert Wilders, but nevertheless credits the revolutions of predominantly-Muslim Tunisia and Egypt with inspiring the Croatian protests. Previously, he said, "there was a concept in people's minds that the only way to overthrow a government was through elections."

Polls say that two-thirds of the population welcomes the marches. Many face a dire economic situation for which no one is offering a remedy. The price of gas here shot up 30 percent in a fortnight. Unemployment is 20 percent, disproportionately young men, and another 10 percent of the population is owed wages. The government has pinned its hopes of financial relief on a bumper summer season as people spooked by the Egyptian revolution head for the Adriatic coast rather than the Red Sea.

All is not well at the top of Croatian politica. Prime Minister Jadranka Kosor has lost support thanks to internal conflicts among the bigwigs of her party, the conservative HDZ. After an austerity package was severely watered down, Kosor largely retreated from appearances in the media and some think she was close to tears when she did appear in public. Her predecessor, Ivo Sanader, who abruptly resigned in 2009, is in a prison in Salzburg, Austria, waiting to be extradited on corruption charges.

President Ivo Josipovic, a Social Democrat, focuses exclusively on the reconciliation with former enemies in the former Yugoslavia, a preoccupation that worries many veterans who feel it might threaten their hero status and the better pension that accompanies it. The Social Democrats, under the Zoran Milanovic, remain passive, hoping simply to pick up the votes of the disgruntled majority without a fight.