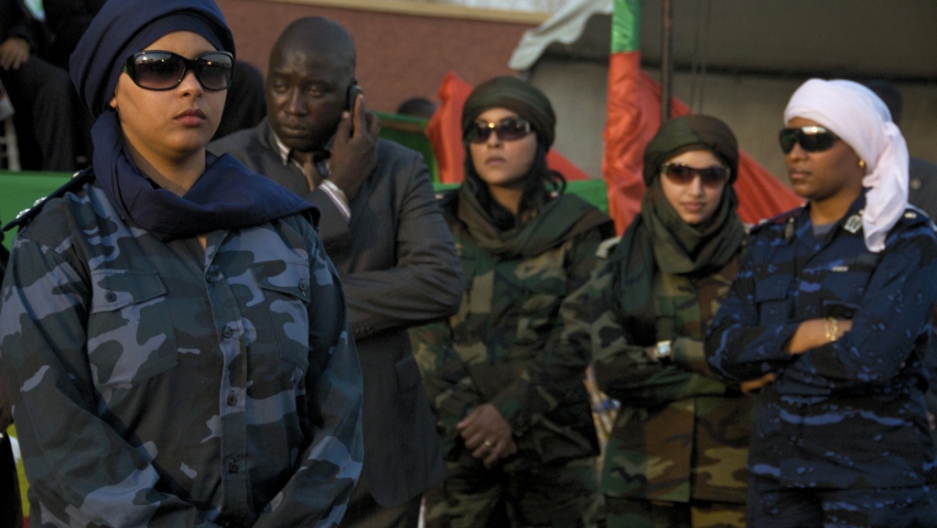 The four female bodyguards traveling with Gaddafi stood below the stage as he spoke at the World Festival of Black Arts and Culture in Dakar this past December.
Credit: Ricci Shryock
Share

DAKAR, Senegal — Whether he is under siege or on the offensive, Libyan leader Muammar Gaddafi is always surrounded by his female bodyguards, also known as his Amazonian guard. Or, sometimes, his revolutionary nuns.

Since the early 1970s, an eye-popping cadre of 30 women have shadowed and at times taken bullets for the man who is today, at 68, the Arab world's most senior dictator.

The women pledge oaths of loyalty to Gaddafi, including a vow of virginity, according to reports. The female bodyguards are not just for show. In 1998, one died and two were injured when Gaddafi was attacked.

It’s a dangerous job and yet for most of the four decades that they have stood by Gaddafi, they have seemed as much his statement on style and gender politics as his security detail.

"Having female bodyguards is just one of his things," said Mohammed el Katiri, Libya analyst for the global risk think tank Eurasia Group. "It's difficult to give a rational explanation for it, apart from that he always likes to be seen as different."

But as is often the case with Gaddafi, there might be a certain shrewd self-preservation behind the madness.

Since seizing power handily in a bloodless 1969 coup, Gaddafi has gradually subdivided the nation's army into a kaleidoscope of colorful units, “people’s militias,” secret service forces, and undercover ops. His defense forces have famously deployed terrorists, like Abdelbaset Megrahi, convicted for the 1988 bombing of Pan Am Flight 103.

Less famously, Gaddafi has played host to a litany of African rebels, from Liberian warlord Charles Taylor to Laurent Kabila, the Che Guevara apprentice who brought an end to Mobotu Sese Seko's 32-year reign over the Democratic Republic of the Congo.

In many ways, Katiri said Gaddafi is just carrying on Libyan tradition. The kings and sultans who ruled the land of complex loyalties and overlapping states survived in power by importing mercenaries, pitting generals against one another, and estranging royal guards from their ancestral homes.

"In this country where you have various allegiances and different tribes, you cannot rely on your army," Katiri said. "You have to find some other people who have no attachment to the place."

But this former junior officer may have a more nostalgic reason for placing his endangered life in the arms of women.

His mother, he once told a Canadian journalist, was an archer.