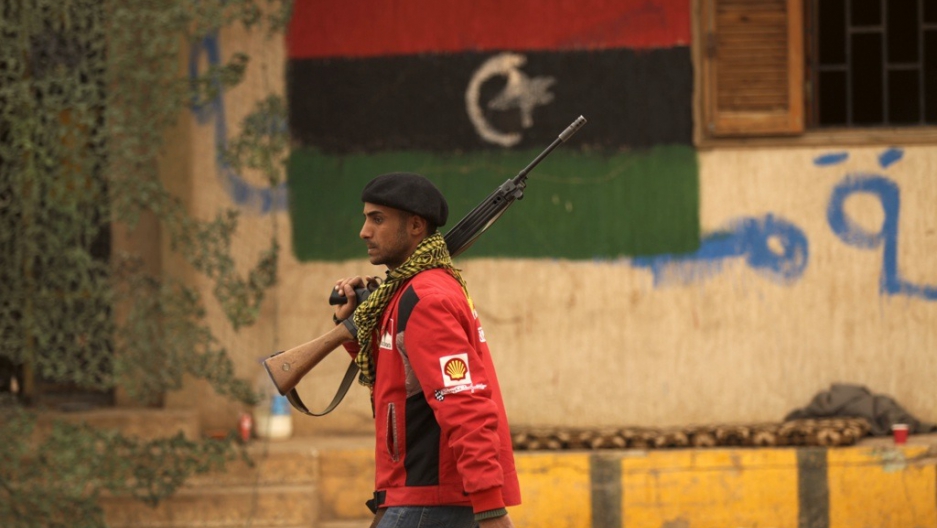 A Libyan rebel walks past a military position decorated with the rebellion flag at the southern entrance of the coastal city of Benghazi on March 15, 2011, as Libyan government forces assaulting the key city of Ajdabiya outflanked insurgents and cut off the road north to Benghazi, rebel sources said amid scenes of chaos in the town.
Credit: Patrick Baz
Share

BOSTON — One might have thought, having been bogged down in Afghanistan for 10 years, and with Iraq as yet unfinished business, our politicians would be more cautious about going to war in Libya. Yet a rising number are not.

Of course senators John McCain and Joe Lieberman can always be counted upon in any war party. But even the more dovish John Kerry, chairman of the senate foreign affairs committee, is talking up intervention in Libya. The urge to intervene is bi-partisan.

Then there are voices from the grave of the Bush administration, such as Paul Wolfowitz and John Yoo, who gave us such bad advice before. Architect of the Iraq disaster, Wolfowitz ignored the Pentagon’s estimates of what war in Iraq would take. Now, Wolfowitz would have us ignore our military’s advice again and intervene in Libya, even if it means “bombing an Arab country.” And John Yoo, of the justice department’s torture memos in the Bush years, is urging the president to ignore the United Nations. He cites Iraq and Vietnam has healthy precedents for unilateralism.

Yes, a no-fly zone is not a boots-on-the-ground invasion in the sense that Iraq was. But once you establish a no-fly zone you have to be prepared to shoot down Libyan planes and helicopters if they call your bluff.

And what if a no-fly zone doesn’t work? It’s probably too late anyway. But the point is that once the United States has committed itself militarily on behalf of the Libyan rebels, is it likely that it would stop if the no-fly zone failed to halt Col. Gaddafi’s ground assault? Then you have to go to a no-drive zone, bombing and strafing Gaddafi’s tanks, moving over the same territory where generals Rommel and Montgomery fought in World War II. Where does that end?

Once we have driven Gaddafi from power it would then be the United States’ job to sort out who the rebels are and whom to put in power — in a country about which we are as woefully ignorant as we were about Vietnam, Iraq and Afghanistan. As in Iraq and Afghanistan, Libya will be a lot easier to get into than to get out of.

Yes, we would have allies, but a template of post-World War II interventions is that, if America is involved, Americans will be predominant. America’s knowledge of the interlocking relationships between the Warfalla, Zintan, Awlad Suleiman, Qaddafa and Margharha tripes of Libya is next to zero.

What if some of these tribes resist an American intervention? Not all Libyans are against Gaddafi, which is a common mistake made among those urging intervention. Even some of the rebels now calling for intervention could turn against us once we intervene. If they started to shoot Americans does anyone think we would not respond? The idea that all would be over with a little show of force would prove to be wishful thinking.

Then, would we have to assign Gen. David Petraeus to bring his counterinsurgency luggage to North Africa and begin a 10-to-20-year process of nation building amid suicide bombings as jihadists flock to Libya?

And what if the Libyan leader we installed turns out to be weak and corrupt? What if the nation we are trying to build resists being built? Do we need another experiment in wishful thinking over experience?

Libya is no stranger to foreign intervention. The first bomb ever dropped in anger was tossed over the side of a primitive flying machine by an Italian aviator onto Libyan tribesmen in 1911. Benito Mussolini spent many long and brutal years trying to subdue Libya. Are Americans so anxious to follow in his footsteps?

But we are Americans, and Americans are pro-democracy. Don’t we have to intervene to save democracy? First of all, we don’t know that the end product in Libya would be democracy. And secondly, do we have to once again fall into the colonialists’ trap of exporting our values and imposing our will by military force?

President Obama has been deeply criticized for being cautious, coordinating his response with Arab and European allies. Did not George Herbert Walker Bush do the same thing in the Gulf War to free Kuwait — working methodically to build a viable coalition? It used to be thought a good thing to look before leaping.

The first president Bush had to contend with the “wimp factor” that Obama faces now. Why does red-blooded Americanism have to be defined by belligerence?

Last of all, the waves of revolt across North Africa and the Middle East have gone against Al Qaeda’s narrative that the United States is interfering and trying to control the Muslim world for its own ends. Intervene in Libya, and the Muslim world would perceive that, once again, America is killing Muslims for oil, or its will to dominate.