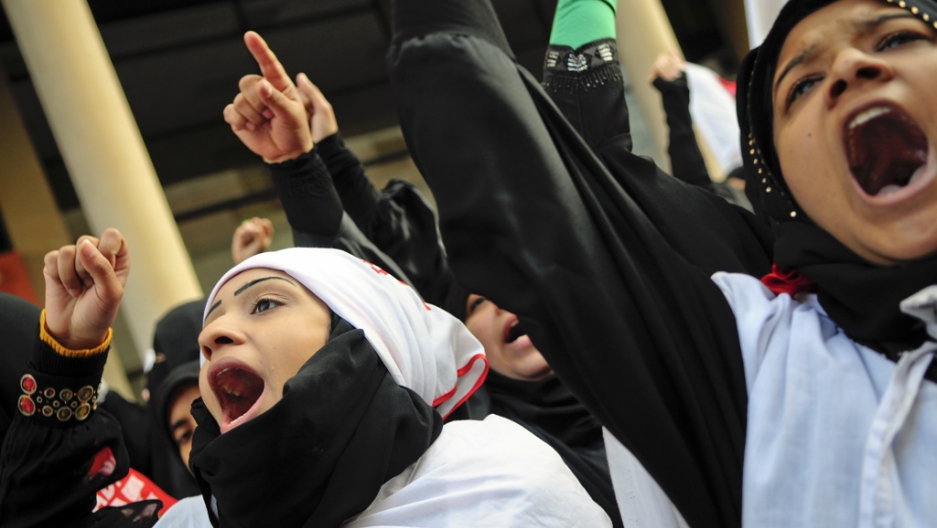 RIYADH, Saudi Arabia — Soldiers and riot police expelled hundreds of protesters from the landmark Pearl Square in Bahrain's capital Wednesday, using tear gas and armored vehicles to try to subdue the growing movement calling for an end to the 200-year-old monarchy.

At least six people were killed as clashes flared across the kingdom, according to AP, quoting witnesses and officials.

The unrest that began last month has increasingly showed signs of a sectarian showdown: The country's Sunni leaders are desperate to hold power, and majority Shiites are calling for an end to their dynasty. A Saudi-led force from Gulf allies, fearful for their own regimes and worried about Shiite Iran's growing influence, has grown to more than 1,000 soldiers.

Wednesday's full-scale assault launched at dawn in Pearl Square, the center of the uprising inspired by Arab revolts in Egypt and Tunisia. Hours later, security forces were picking through burned debris and other remains of the protest camp.

The king's announcement Tuesday of a three-month emergency rule and the crackdown on Pearl Square sent a message that authorities will strike back with overwhelming force in the strategic island nation, which hosts the U.S. Navy's 5th Fleet.

Saudi Arabia dispatched mechanized units of the Saudi National Guard on Monday, carrying around 1,200 soldiers to Bahrain as part of a collective action by the six-member Gulf Cooperation Council to demonstrate support for Bahrain’s besieged royal family.

For more than a month, street protesters drawn largely from Bahrain’s majority Shiite population have demanded political reforms from its minority Sunni government.

The Saudi government said that it was responding to a request from Bahraini King Hamad bin Isa al-Khalifa for help in protecting government installations. So far, the only other GCC contingent to arrive in Bahrain is a 500-member police force from the United Arab Emirates.

The Saudi troops kept a low profile Tuesday, not even turning up to give the Saudi embassy added protection from thousands of protesters.

“Nobody has seen them, we’ve not seen any soldiers in the street,” said one Bahraini who asked not to be named.

A large contingent of the Saudi troops has been stationed in the area of Riffa, where the ruling Khalifa family lives, according two Bahrainis reached by phone.

Nabeel Rajab, president of the Bahrain Center for Human Rights, said that besides Riffa, Saudi troops are also in Aali.

“Everybody thinks the Saudis should not have come to Bahrain,” Rajab added.

Reuters reported that around 5,000 people, carrying Bahraini flags, marched from the Pearl roundabout, the protest movement’s main staging area, to the Saudi embassy.

"Down, down with Hamad!" they chanted, referring to the king. Once there, no clashes occurred, Rajab said, because there were no police or military to confront them.

Reports that a Saudi soldier had been shot dead Tuesday were denied by the Bahraini government. A statement from the Saudi Defense Ministry also said the report was untrue, adding that “Saudi forces had not been in combat.”

Rajab said it was still unclear what restrictions or curfews will be introduced to implement the declared state of emergency, which is to last three months.

Some analysts questioned why Bahrain’s king asked for military assistance from the Saudis and other Gulf neighbors when he has not even used his own 12,000-strong Bahrain Defense Force to contain the protests over the past month. That job has been largely done by the Bahraini police.

“So far, Bahrain has not used a fraction of its own power,” said the Bahraini resident, who asked not to be named so he could speak frankly.

It also sends a signal to Saudi Arabia’s own Shiite minority that they should not be emboldened by their counterparts in Bahrain to demand political changes in the kingdom. So far, protests in recent weeks by Saudi Shiites have been mainly peaceful and aimed at obtaining the release of fellow Shiites detained for long periods without charges.

In Bahrain, Shiites make up 60 to 70 percent of the population but are largely shut out of top posts in the government, which are held mostly by the ruling royal family and its Sunni supporters. This divide is why the Bahraini protests have taken on a sectarian character.

Saudi Arabia’s military intervention in Bahrain also risks provoking its main rival in the region, Iran, into a more aggressive stance, some observers noted.
Until today, Iran had been largely silent about what was happening in Bahrain. But the arrival of Saudi troops could not go unremarked.

“The presence of foreign forces and interference in Bahrain’s internal affairs is unacceptable and will further complicate the issue,” Ramin Mehmanparast, the Iranian Foreign Ministry spokesman, told a news conference in Tehran, according to state-run media.

The Bahraini government subsequently denounced his comments and recalled its ambassador from Tehran, news agencies reported.

A Saudi official dismissed the danger that Riyadh’s intervention could move Iran to become involved in Bahrain’s conflict. Iran is “making a lot of rhetoric but they are not offering a solution,” he said. “These threats won’t really affect our policy.”