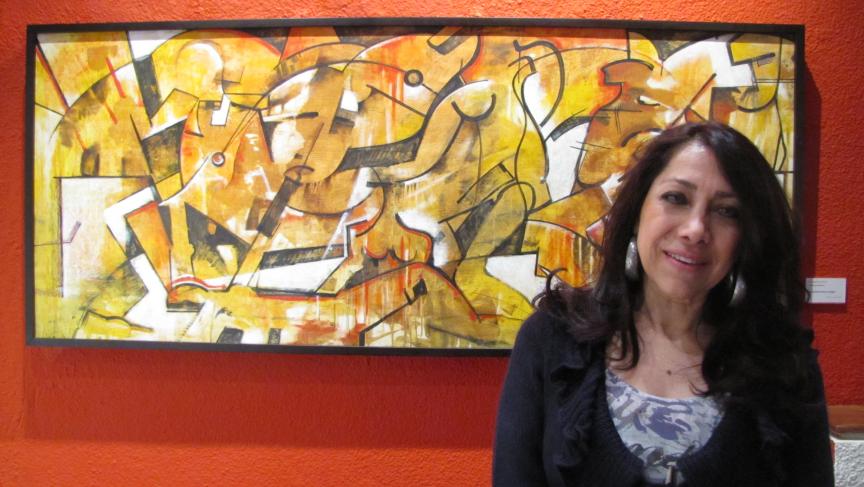 Share
By Monica Ortiz Uribe Even a mild February night under a beautiful full moon can't persuade most Juarenzes to leave their homes after dark. But at a reception for local artist Gildalorena Martinez, about 50 friends and neighbors ventured out for the premiere of her latest collection. The exhibit is housed in a small city museum hidden between the skeletal trees of a vast city park near the border. The title of the collection, "Ciudad de Arena y Sangre" (meaning City of Sand and Blood) was surprisingly too much for city officials. They omitted the "Blood" part and left it at "City of Sand." Just feet from the museum street vendors push gory newspapers, announcing the city's daily death toll against motorists' windshields. In her opening speech, Martinez explained that this is a turning point in her career. Before I looked within for inspiration, she said, in this collection I look outside – outside at the terrible violence overtaking her city. In the past three years, nearly 8,000 people have died in Juarez due to drug-related violence. The paintings, done in hues of reds and deep blues, depict a silent inferno of ghostly figures. Martinez lives in modest home in a central Juarez neighborhood. A slender attractive woman, she walks in high heels and pushes strands of long dark hair behind her ear as she rummages through paintings stored in corners and closets all over her house. Expressions of agony Since she first arrived in Juarez, Martinez's art has undergone a transformation. At first she focused on the beauty of the female figure. But as the city sank into a whirlpool of violence, Martinez began to paint her female figures with expressions agony locked behind streaks of red paint. "This collection wasn't something I planned, it was something I felt," Martinez said. "The moment you feel pain for a particular situation as an artist you take up your brush and it's inevitable that those feelings will end up on the canvas." There was pain all around her. Martinez closed her studio where she taught art to children after neighboring businesses were extorted. Friends and acquaintances spoke of kidnappings and murdered loved ones. Then one of her adult art students, a locally respected business owner and family man, was shot and killed in front of his house. The event brought back terrible memories of the death of her own father, a congressman in Mexico City, who was assassinated when she was 18. Martinez cloistered herself indoors. Her health fell apart. "I began to lose a lot of weight," Martinez said. "I had migraines like I'd never had before in my life." For months, Martinez was mostly bedridden. Doctors couldn't figure out what was the matter. They suspected everything from sinusitis to a brain tumor. She left to stay with relatives in Mexico City where she finally recuperated. When she returned to Juarez, Martinez concluded she'd suffered from a severe nervous crisis. "The level of stress you live with in Juarez is impressive, it's so much that of course it's going to affect your health," Martinez said. Returning to Juarez But even through her illness and after her return to Juarez, Martinez painted. Finally exhibiting that work back at the city museum was a triumph. One of her admirers is Cesar Castillo, a restaurant manager in Juarez and Martinez's neighbor. "Fantastic. Right now this work has a heavy load of pain suffer darkness but that's her commitment to deliver that to the rest of the Juarenzes," Castillo said. "And I'm proud of that because it's hard to show that face it's hard to show that part that hurt your feelings." Having hit bottom, Martinez re-emerged as a stronger, more mature artist. She is again her radiant, energetic self. And her work will continue to be showcased. This summer "City of Sand and Blood" will be on display at the House of Representatives in Mexico City.