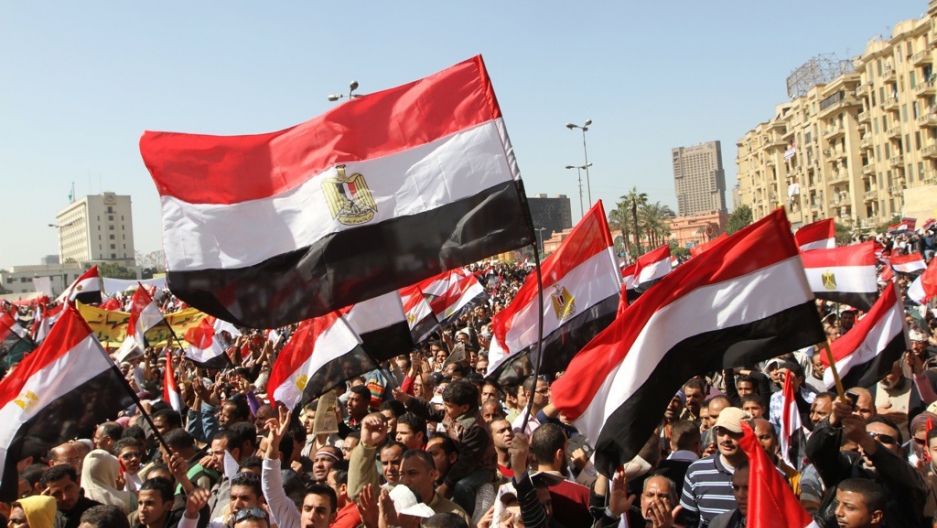 Thousands of Egyptians hold up their national flag as they gather following Friday prayers celebrating the end of former President Hosni Mubarak's regime and the success of their revolution in Cairo's Tahrir Square on March 4, 2011.
Credit: Khaled Desouki
Share

JERUSALEM — Amid the earthquake of revolution and protest shaking the Arab regimes of the Middle East, their Israeli neighbor has by and large maintained a calculated, uneasy silence.

The normally voluble spokesman for Prime Minister Benjamin Netanyahu, Mark Regev, has a one sentence response to the question of Israel's view of the revolutions in Tunisia and Egypt, the uprising against arch foe Colonel Muammar Gaddafi in Libya, protests in Bahrain and challenges to King Abdullah II in neighboring Jordan.

“Ultimately,” Regev consistently says, “if Israel's neighbors transform into democratic states, that is good for peace because democracies are more stable and peace-loving than dictatorships.”

Israel has deliberately sought to keep a low profile as the regional dramas play out, departing from its silence occasionally to warn of the dangers if change comes to mean increased Islamic fundamentalism or broader Iranian influence.

“We’re not a factor in what’s going on. If you look at the protester’s slogans they don’t mention Israel. And when you’re not a factor don’t make yourself a factor. That’s been the policy and it is wise,” said Yossi Alpher, former director of the Jaffee Center for Strategic Studies.

“Anything our leaders say could just make things worse in relation to existing and emerging regimes. So it’s time to lay low.”

But beneath the silence lies a deep concern that the changes sweeping the region are detrimental to Israel.

The transformations cut very close to home with the ouster of reliable neighbor and strategic partner Hosni Mubarak in Egypt. On the eastern border, Israel’s other peace treaty partner, King Abdullah II in Jordan is facing demands that he give up much of his power so that the country can become a constitutional monarchy. Although the Hashemite regime has been a linchpin of stability for Israel and a crucial de facto ally against Palestinian nationalism, Israel has remained silent during Jordan’s crisis.

U.S. President Barack Obama recently told Jewish leaders in Washington that more democracy in the Arab world would be good for Israel and that looking back 10 years from now the upheavals will be seen as the start of positive change. But Zalman Shoval, a former adviser to Netanyahu and Israeli ambassador to Washington, said he is not necessarily convinced.

“It is difficult to try to foresee 10 years from now when all the experts didn’t foresee what would happen in Egypt or Tunisia. So I’d be wary. Nothing is really predictable,” he said.

“There are precautions that need to be taken to stave off jeopardy,” Shoval added. “We will have to increase our defense expenditure and we shall also see what sort of agreement we can reach with the Americans to increase the strategic cooperation.”

Alpher believes it is too early to say how the changes will impact Israel.

“We don't know if the revolutions will lead to representative democracy, whether they will empower Islamists and how the Islamists will relate to Iran,” he said.

Some inside Israel, however, say it is clear that Israel will lose out in everyway as a result of the revolutions taking place across the Middle East and North Africa.

Wadie Abu Nassar, a Haifa-based analyst and head of the International Center for Consultations, a think-tank, said the revolution in Egypt means that for the long run Israel will have to invest more in the army to deal with the possible escalation of conflict on the southern border.

It also can no longer view Egypt as a reliable supplier of natural gas, he said.

As for Jordan, the king, on the defensive from a public that is against the country’s peace treaty with Israel, is unlikely to continue to cooperate with its neighbor in the future, analysts said. Other moderate Arab regimes, including in the Gulf, are also mindful of public opinion, and are now less likely to encourage the Palestinians to make peace compromises with Israel, Abu Nassar said. And without the diplomatic cover Mubarak gave them to negotiate, the Palestinians, if they do agree to talk, will ask for tougher terms from Israel than in the past, he said.

And Abu Nassar rejected Regev’s stance, also voiced by President Shimon Peres, that Israel would be happy with the emergence of democracies in place of the Arab regimes.

“That would end the Israeli monopoly on democracy in the Middle East, a claim that is a major source of western support for Israel,” he argued. “If democracies arise in the Arab world, Israel could lose much of its value in Western eyes.”

Amid this bleak environment, from Israel's viewpoint, Netanyahu is now said by his aides to be contemplating a new “initiative” to address the conflict with the Palestinians. It remains vague and muted at the moment, with no certainty that anything new of substance is in the works.

An Israeli official who asked for anonymity stressed the initiative would entail a “phased approach,” meaning it would not immediately try to resolve all the core issues of conflict such as Jerusalem and refugees but would rather focus on setting up a Palestinian state with temporary borders in parts of the West Bank.

Ophir Akunes, an Israeli lawmaker who is close to Netanyahu, said on Saturday that Netanyahu could propose a long-term interim agreement with the Palestinians. He stressed Israel would retain the strategic Jordan River valley and blocs of settlements under any arrangement.

The Palestinians fear that anything less than permanent borders would invite Israeli annexation of West Bank land. And the upheavals in the region are forcing the Palestinian Authority to be more responsive to public opinion within its own territory, which is less willing to compromise with the Israelis.

Palestinian President Mahmoud Abbas on Saturday ruled out any deal creating provisional borders, something he has also rejected in the past. He said only a comprehensive final status agreement resolving core issues, such as Jerusalem and refugees with talks preceded by an Israeli settlement freeze, would be acceptable.

Negotiations between Israelis and Palestinians broke down in September after Israel refused to renew a moratorium on Israeli settlement construction in the West Bank. Since then, the Palestinians have focused on garnering international recognition for a state in the West Bank and Gaza Strip. They have set September as a deadline for having ready all of the institutions for a sovereign, independent state.

That timetable, a growing sense of international isolation, and opinion polls showing the centrist Kadima party and far-right Yisrael Beiteinu party making gains at the expense of Netanyahu's Likud party are believed to be factors in the prime minister’s consideration of a new peace initiative.

“He is feeling pressure to be less muted,” Alpher said.