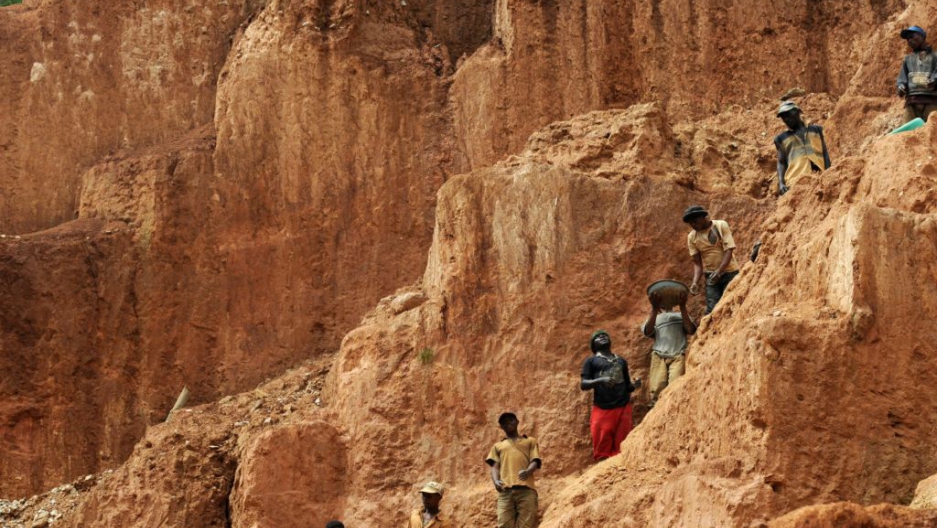 Workers stand on a muddy cliff as they work at a gold mine on Feb. 23, 2009 in northeastern Congo.
Credit: Lionel Healing
Share

GOMA, Democratic Republic of Congo — On a recent Thursday afternoon there was a car chase through the coal-dust streets of Goma, this provincial capital clinging to Congo’s wild eastern edge.

Inside the car were four men: an American, a Frenchman and two Nigerians. They raced over the city’s potholed roads, pursued by local security, heading for Goma airport where a twin-engine Gulfstream jet waited.

They made it to the plane but were arrested before the jet could take off.

The runway was scattered with lumps of hardened lava and crumpled airplanes, its air traffic controllers more used to aging Russian propeller planes with sozzled Communist-era pilots than slick executive jets, registered in Dallas and flown in from Nigeria.

In the belly of the plane was a cargo of more than 400 kilograms (881 pounds) of gold, according to the provincial governor, Julien Pakulu. At current prices, this haul is worth about $20 million. But sources in Goma said it was swapped for the bargain price of $6.8 million in cash that was unloaded by soldiers loyal to a notorious Congolese warlord-turned-army general, Bosco Ntaganda.

Human rights and advocacy organizations consistently allege that Ntaganda is one of many military men who profit hugely from the trade in conflict minerals from this part of the world, a trade that fuels the fighting and the rape that has come to define eastern Congo.

It’s a murky tale. Soon after their arrest on Feb. 3, Pakulu said: “Preliminary enquiries have revealed that these people arrived in Goma with a large sum of money, in the millions of dollars, for a gold transaction.”

A United Nations report last year said that Congo’s gold trade is worth about $160 million a year and that 80 percent of it is smuggled out of the country, often through Kenya and Tanzania.

In September, President Joseph Kabila placed a moratorium on all mining and sales of minerals from the east of the country in a bid to root out the “mafia” groups that control the trade at the barrel of a gun.

The men are under “hotel arrest” in Goma and, if convicted, might face prison in a jail named the worst in Africa by the United Nations with conditions labeled “inhumane” by a top U.N. official. Inmates in orange pajamas crowd the open courtyard of the colonial-era building surrounded by high white-washed barbed-wire topped walls.

The Texas-registered  plane is owned by Southlake Aviation in Dallas and was rented to CAMAC International, a $2 billion a year oil and gas firm headquartered in Houston, according to reports in local newspapers.

CAMAC’s chairman and CEO is the Nigerian-born oil magnate Kase Lawal who was appointed to U.S. President Barack Obama’s Advisory Committee for Trade Policy and Negotiation in September 2010.

Aboard the plane was Mukaila "Mickey" Lawal, the tycoon’s half-brother and head of CAMAC’s Nigeria operations as well as Edward Carlos St. Mary, an American diamond dealer with a criminal record, a Frenchman, another Nigerian and the aircraft’s four American crew.

St. Mary is a former high school quarterback and West Point cadet with a criminal record for assault and illegal posession of a weapon, according to local papers, which also report that he is accused of conning investors and has been ordered by judges to pay out compensation worth more than $2 million.

The men are suspected of buying the gold from Ntaganda, the former head of a Tutsi rebel group who is now a senior Congolese army commander. He has an arrest warrant outstanding from the International Criminal Court (ICC) in The Hague which accuses him of war crimes, including the recruitment of child soldiers.

According to St. Mary’s Nairobi-based lawyer, it is the men aboard the plane who have been conned in an elaborate deal that involved downpayments and disappearing gold. In a letter seen by GlobalPost, Punit Vadgama, of Shapley Barrett & Co., laid out a convoluted series of events and appealed to Kabila to release St. Mary.

For his part, in an interview with a news agency last month, Ntaganda denied any involvement except, he said, to halt the deal and apprehend the smugglers.

“My men collaborated with the security services to stop them,” he said. “I am a soldier, I am not a businessman and furthermore, mining activities are prohibited on our premises.”

A U.N. report published in November said that Ntaganda’s former rebels control much of the lucrative mining of tin ore, coltan and gold in North and South Kivu provinces of eastern Congo.

The announcement came just days after a Kenyan tax official investigating the seizure of 2.5 tons of gold believed to have been smuggled from Congo was shot dead outside his home in Nairobi.