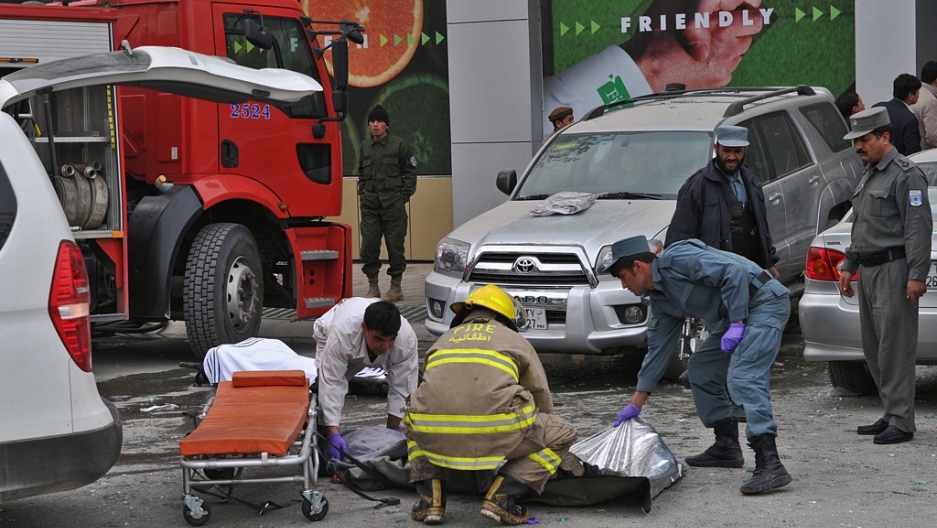 It seems that the Taliban is getting weaker and weaker.

The recent rash of suicide bombings that has claimed roughly 200 Afghan lives in the past month or so is, it appears, indisputable proof that the insurgency is on the wane. Demoralized by the fierce NATO campaign against them, and unable to engage in a “fair fight,” the Taliban are resorting to terror tactics, which, along with all the death and destruction they bring, is pretty unsporting of them.

This, at least, is the tenor of a recent crop of news reports quoting military analysts on the Taliban’s “new” tactic of using suicide bombings to sow fear. The examples are not hard to find. There were the hits on the Finest Supermarket in late January and the City Center on Valentine’s Day. These were two of the most popular destinations in Kabul, before the attacks claimed a dozen lives. On Feb. 19 we witnessed the horrific and well-coordinated attack in Jalalabad that left 40 dead; a few days later a suicide bomber targeted a census office in Kunduz , killing 31.

Just a few days ago, a series of explosions ripped through the crowd at a dogfight in Kandahar. Death toll: 10. But all of this is supposed to give us hope that the Taliban are actually in decline. The fact that they can spread fear and claim victims almost at will is merely a sign that they have lost the stomach, or the ability, to fight face-to-face with superior international forces.

Perhaps I would not be so jaundiced had I not heard this explanation before. The first time I recall being told that suicide attacks were an encouraging sign of the Taliban’s feebleness was in 2005, when a series of suicide bombers targeted Kandahar. I was actually in Kandahar at the time, at the Continental Guest House frequented by almost all foreign journalists until half of it was blown away by the Taliban in 2009. Kandahar was relatively safe then. I had just climbed the “Forty Steps” shrine, shopped for beaded caps in the bazaar, and had tea in Baba Wali Park, overlooking lush, green Arghandab Valley.

The next day there were several explosions in the city, and within a month, Kandahar had become off-limits for all but the bravest or the most foolhardy.

“If they were strong enough they would fight us face to face,” said one NATO military officer. “These attacks are their last gasp.”

That “last gasp” has lasted more than five years. It is turning into a prolonged pant. While the Taliban seem able to recruit more and more willing martyrs, Afghanistan’s civilian population lives in constant fear. Not to mention, of course, the increasingly jittery international community.

The violence is no longer restricted to the south. Just three years ago we were able to make the two-hour road trip from the northern city of Mazar-e-Sharif to Kunduz without a problem. The only difficulty was finding a place to stay; our preferred location, which served hearty German food and Heineken beer, was fully booked. We did manage to snag a few rooms at the guesthouse next door, though. One year later Asef, our trusty driver in Mazar, flatly refused to undertake the journey. The outskirts of Kunduz had been infiltrated by the insurgents.

“No one will take a foreigner on that road now,” he explained apologetically. One after the other, provinces we used to visit without a care have become no-go zones. I once spent a night in Pul-e-Khumri, the seedy capital of Baghlan province. The local hotel was pretty dire, but we had brought along a few bottles of wine to ease the pain.

Upon arrival, however, we found that a group of bearded, turbaned men were also in residence. We huddled in our rooms and drank our wine in silence, not wanting to offend. The “Taliban,” as we jokingly called them, were gathered in the lobby right outside my door. Imagine my surprise the next morning, when I emerged to find that our “fundamentalist” neighbors had left at least a dozen beer cans strewn on tables, floors and sofas.

Nowadays foreigners are advised not to drive through Pul-e-Khumri. The insurgency has spread, and there have been pitched battles in the city and on the road out of town.

So exactly where, pray tell, are the signs of Taliban weakness? The fact that they refuse to go head-to-head with a force that outnumbers and outguns them, that has airplanes and helicopters and drones? The latest budget figures from the Pentagon have the United States spending about $100 billion a year on the war. Even the rosiest estimates of what the Taliban make annually from drugs, taxes, and whatever they can skim from international aid projects barely tops $300 million, about what the Pentagon goes through in a day.

And still we can’t seem to beat them. If the Taliban get any “weaker” I may soon be wearing a burqa.