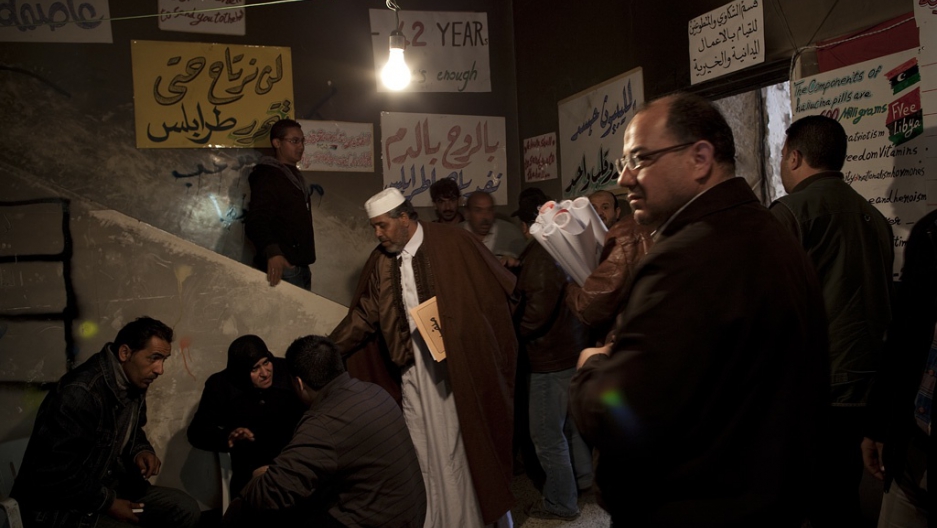 Behind the beige, Soviet-style exterior of Benghazi’s courthouse roughly 150 lawyers, judges, doctors, businessmen and young people are working around the clock to organize the revolution — and maintain order in a region whose previous institutions belonged to Gaddafi alone.

The graffiti-covered building and the seaside corniche across the road have become the rallying point for dissent in Benghazi, Libya’s second largest city and heart of the current revolution. Ecstatic daily demonstrations spill into the street, complete with face painting and celebratory rifle fire. In the top floor of the courthouse some of the younger members of the opposition take their positions behind the glow of laptop screens, updating Facebook pages and Twitter feeds.

This is the place where protests began, quickly developing into a full-blown revolt that has shaken the foundations of Gaddafi’s 41-year-rule — amazing even those involved.

“We began this just as a peaceful protest,” said Mustafa Gheriani, a silver-haired graduate of the University of Western Michigan and an industrial engineer. “But very quickly we had a revolution on our hands.”

With the “Free East” now largely in the hands of the rebels a self-styled set of revolutionaries calling themselves the Feb. 17 group are working to set up an alternative leadership to Gaddafi.

“We went from zero to creating a city council,” explained Gheriani. “Now we are looking to the national level.”

The recently announced National Libyan Council, an umbrella group presenting the many local committees formed since the revolution began, is meant to act as the face of the revolution, providing a unified channel of communication both between local councils and with the outside world.

Gaddafi’s brutal crackdown on the pro-democracy uprising — which has led to the deaths of an estimated 1,000 people and caused 100,000 people to flee to neighboring Egypt and Tunisia — has received almost unanimous international condemnation.

"We're going to keep the pressure on Gaddafi until he steps down and allows people to express themselves freely and determine their own future,” said Susan Rice, the U.S. ambassador to the United Nations, on ABC television's "Good Morning America" program Tuesday.

The European Union adopted fresh sanctions against Libya, joining the US, which has already seized $30 billion in Gaddafi-related assets.

But even in the tumult of revolution the trash still needs to be picked up. Businesses need to pay their workers. Banks must remain open. So, like other rebel-held cities, Benghazi has formed committees to deal with city services, banking, education, health, security and other essential services.

Next door to the courthouse a former security building that the rebels have pillaged and now use to collect weapons flies the red, green and black flag used when Libya gained independence from Italy in 1951 and which has become a symbol of a “free” Libya.

The rebel army has spent the week organizing the weapons they seized from the government and registering volunteer soldiers. It’s not clear, however, who’s commanding the opposition forces, or how large an army they control.

“No one knows for sure how this will all play out; we all live hour by hour,” said Iman Bugaighis, a professor of orthodontics who was drafted as unofficial spokeswoman for the committees. “But we are past the point of no return. This is a bloody, bloody regime, we all know that. So it’s death or freedom for us all.”