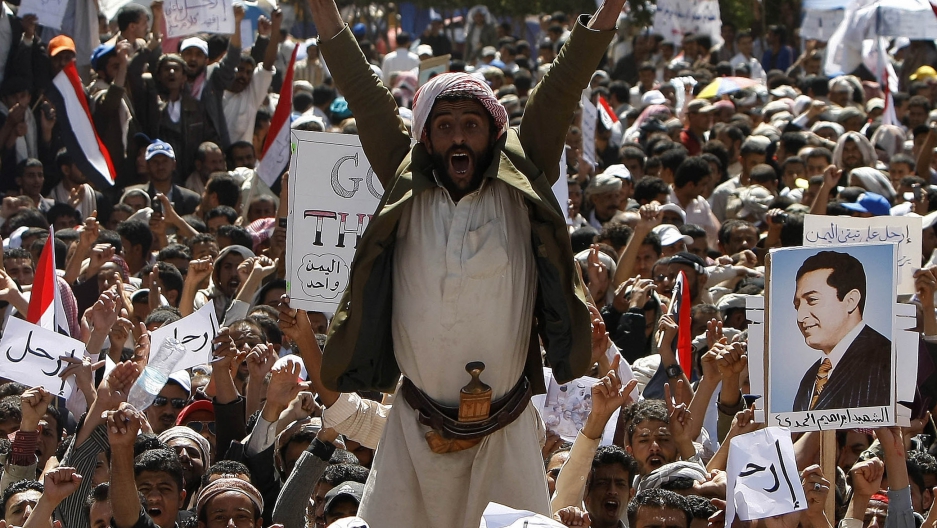 SANAA, Yemen — Tens of thousands of protesters poured into a square in Yemen's capital Sanaa on Tuesday for a massive anti-regime rally, as President Ali Abdullah Saleh lashed out at the US and Israel accusing them of trying to destabilize his country and the Arab world.

"There is a US-led operations room in Tel Aviv with the aim of destabilizing the Arab world" and it is "run by the White House," Saleh told a gathering of University professors and students this morning.

Meanwhile, Yemen’s opposition parties took to the streets joining mass protests at Sanaa University where students have been camped out in tents for the past week calling for Saleh’s ouster.

On Monday, the opposition rejected an offer by Saleh to form a unity government "within 24 hours."

“This is the beginning of a new era and there are promising signs of the start of an Islamic Caliphate here in Yemen,” Abdul Majeed Zindani, the leader of Yemen’s Islamic party, Islah, told thousands of protesters crouched down at the entrance to the university.

Zindani, a charismatic religious leader and founder of the Iman University, a Sunni religious school, has been labeled a "specially designated global terrorist" by the US treasury department because of his "history of working with Osama Bin Laden."

Zindani also likened the growing protests in Yemen to a "form of Jihad" and warned Yemen’s military against obeying anyone who ordered them to kill a Muslim.

Some students are worried by the arrival on the scene of the opposition parties and claim their grass-roots movement is being hijacked by those seeking political power.

“We want the Islah to help us but not to hijack our movement. We did not invite him [Zindani] to come, he just arrived unannounced. Many of us were shocked by the things he said,” Adel as-Surabi, a 29-year-old medical student, told GlobalPost.

Adel is the self-appointed spokesman for the student protest movement and spends most of his time tweeting and spreading news of the protest on Facebook from his "office," a battered canvas tent with limited internet access.

Adel is also worried that his movement is losing its revolutionary fervor.

“Our revolution is turning into a festival, people just come now to watch and chew qat,” he said beckoning to a group of tribesmen crammed into a small tent stuffing their mouths with the green, mildly narcotic leaf, enjoyed by most Yemeni men.

Others are more optimistic about the prospects of Saleh being overthrown.

“The revolution in Yemen has already succeeded. Even if Saleh stays in power he will ever enjoy the kind of concentration and personalization of power that he had just a few weeks ago,” said Abdul Ghani al-Iryani, a political analyst whose grandfather was president of Yemen in the 1960s and '70s.

"Because of what's happened in Egypt and Tunisia, the wall of fear in Yemen has been broken, right now Yemenis genuinely believe that people power could bring the regime down."

Iryani believes that Saleh's options in the face of spiraling unrest are now "very limited."

"People have now asserted themselves and they will assert themselves again. If he moves tanks into the square he will usher a civil war and he will be the first victim."