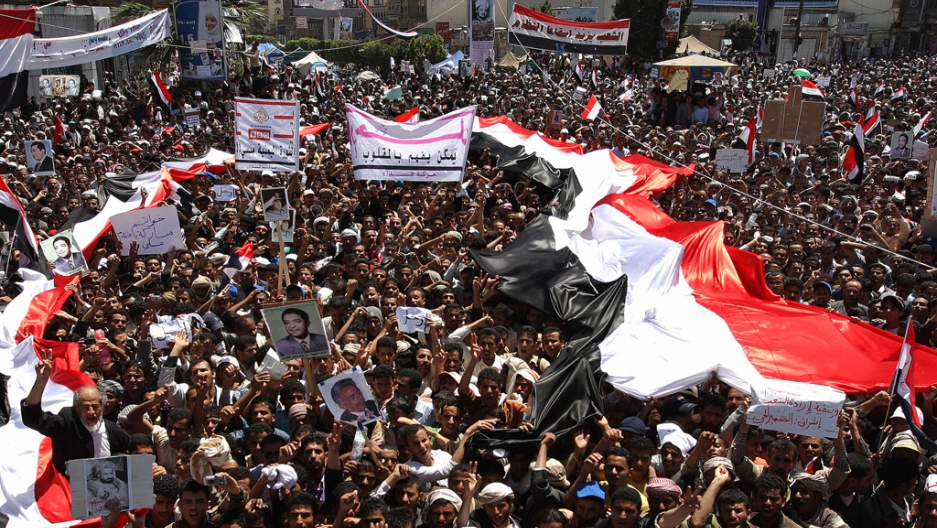 SANAA, Yemen — The number I called Monday morning belonged to a young man named Zaid, who I’d met a few days prior at the roiling anti-government protests outside Sana’a University in Yemen’s capital.

I’d asked him to call me with any news, if any violence broke out. And this was it.

“There will be shooting. They have guns. If not tomorrow, then Thursday or Friday,” he said, standing in the middle of what sounded like thousands of screaming protesters. I pulled the phone away from my ear, deafened momentarily by the cacophony of people howling the now familiar incantation, catchy as a jingle in Yemeni Arabic: “The people want the regime to fall!”

Zaid’s warning — that violence is coming; that everyone has guns; that any minute now this nation will collapse into a horrific civil war — has become almost cliche these last few days.

People have warned specifically about today, named a “Day of Rage” by both opposition coalition members and influential tribal figures, who have announced they will be joining anti-government protesters in the name of those who have died in recent weeks. On Feb. 25, 11 protesters were killed by security forces fired from armored cars into demonstrations in the southern city of Aden.

Thousands of protesters took to the streets today in Sanaa, demanding for Yemeni President Ali Abdullah Saleh's immediate ouster. Thursday and Friday, which are the weekend in Yemen, typically see more protesters as well.

Both supporters of Saleh and those who are willing to die to see him go, have said basically the same thing: There are two options in Yemen.

The first is that Saleh will somehow pull off another incredible coup of political survival by convincing both disparate tribal leaders and the national opposition coalition — and, by extension, the protesters on the street, to whom the opposition must ultimately answer — to accept a handful of concessions. In other words, Saleh will somehow convince Yemenis to give him another shot.

Uncle Ali, as he’s known here, has managed to stay in power through civil wars, secession movements, ongoing battles with northern rebels, Al Qaeda attacks on U.S. targets from his soil, and pitched internal political in-fighting for the past 33 years. His modus operandi has been an effective mix of compromise, bargaining, cajoling, backstabbing, bribing, reneging and promising once again — an intricate diplomatic jig he once famously likened to “dancing on the heads of snakes.” If any Arab leader can survive the Arab Revolutionary movement, it’s this guy.

That said, today's so-called "Day of Rage" comes one day after key opposition figures refused Saleh's offer of a coalition government. The offer, which was considered by many to be the president’s last-ditch effort at reconciliation, promised to include opposition leaders in a "unity government" with the ruling party. Opposition figures — emboldened by hundreds of thousands of protesters who marched in streets across Yemen last weekend — refused the deal outright.

The second option — and the outcome favored by anti-government protest leaders, many of whom have sworn to me that they would rather die than have Saleh complete his term in 2013 — is full-fledged civil war.

In a place like Yemen, where all political machinations are made complex by an intricate web of tribal and familial loyalties, ancient grudges and financial ties, civil war seems terrifyingly probable.

Yemen has seen two civil wars — and many more bloody internal skirmishes — in the last 50 years. This time around, a civil war would most likely pit some portion of the Yemeni army and a segment of the tribes that have remained loyal to Saleh, against another portion of the army, which is likely to defect from Saleh, along with another cross-section of tribes, separatists from the south and possibly Houthi rebels from the north, depending on how things shake down. In Yemen — one of the most highly armed nations in the world — civil war would be brutal.

Last year, a friend of mine invited me to his village a few hours from Sanaa. When we arrived, his brothers and cousins greeted us, draped in Kalashnikovs and rifles and bandoliers packed with extra bullets. Two rocket-propelled grenade launchers lay on the floor of the living room next to a pile of ammunition. They apologized for appearances, explaining that a neighboring tribesman had killed someone from their tribe. In accordance to the ancient blood custom, revenge was in order.