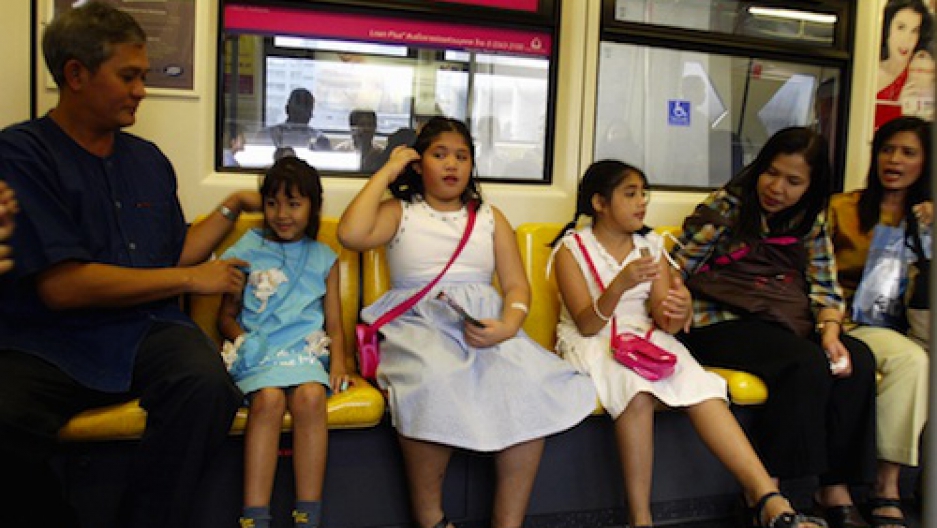 A display ad for skin-whitening tonic on Bangkok's elevated commuter trains reads, in Thai, "These seats reserved for… white people."

First off, yes, skin-whitening tonic exists. Throughout Thailand, it's sold in tiny bottles at most 7-11 shops. I have no idea how, or if, it actually lightens a person's skin.

Through an American lens, this ad is truly ugly. U.S. kids are taught early on about the national shame of segregation: separate water fountains, separate schools and separate sections on public buses.

But after careful thought, I don't think this ad, meant for a Thai audience, is mocking apartheid or racial segregation. That said, it's still pretty cringe-worthy. (By the way, the ad in the accompanying photo is advertising something different -- lower interest rates -- but Twitter user @globalmouthful has a photo of the actual skin-tonic ad here.)

Global Post has previously written about Asia's obsession with fair skin. Whereas dark skin denotes a life of laboring under the sun, lighter skin denotes a more privileged existence.

But despite this ad's slogan, I don't believe the phrase "white people" refers to caucasians. It's probably referring to light-skinned Asians, namely Thais. And though it immediately reminded me of racial segregation, Thais don't carry the historical baggage of whites-only train cars. Nor are they as sensitive to Nazi imagery, which I routinely spot on teenagers' T-shirts. That's not to say they don't have their own baggage and embarrassments. It just isn't ours.

This ad's biggest offense is reinforcing the notion that light-skinned Asians are more valuable than their darker counterparts. In a column on the ad, a Bangkok Post editor writes that Thai people will "go to any length to have fair skin that they believe will lift them into the sphere of glamorous high-society, while dark skin is associated with labourers and farmers."

Or maybe this ad is a really twisted parody on racial segregation. Maybe it's a marketing gimmick to get both Thais and the foreign media talking.

If so, well, I suppose it's working.