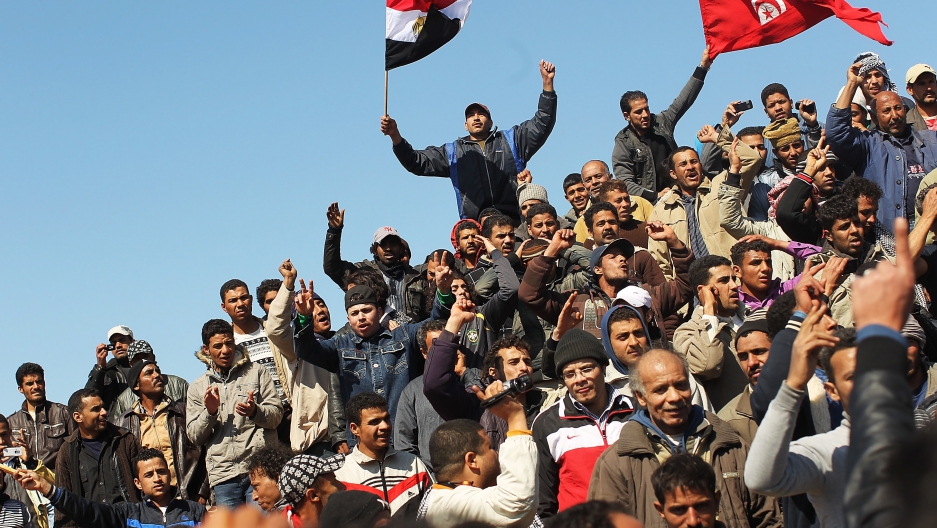 Waving Egyptian and Tunisian flags, migrant workers who recently fled into Tunisia from Libya demand to be taken home during a demonstration at a displacement camp on Feb. 27, 2011 in Ras Jdir, Tunisia. As fighting continues in and around the Libyan capital of Tripoli, tens of thousands of guest workers from Egypt, Tunisia and other countries are fleeing to the border of Tunisia to escape the violence. The situation is quickly turning into a humanitarian emergency as fledgling Tunisia is overwhelmed with the migrant workers. Libyan leader Muammar Gaddafi has vowed to fight to the end.
Credit: Spencer Platt
Share

According to official figures, at least five people have been killed and 200 injured in demonstrations against the interim government since Friday, according to the German Press Agency, DPA.

The tense situation in the country has worsened as a result of an exodus from neighboring Libya. The Red Cross is warning of a potential humanitarian catastrophe, saying that at least 40,000 people have fled to the country from Libya since Feb. 20.

The United Nations' refugee agency on Sunday said it believes that 50,000 refugees have already arrived in Tunisia.

Libyan guards at the most important border crossing, Ras Jedir, were said to have left their posts. On Saturday alone, 10,000 people — mostly Egyptians — reportedly crossed into Tunisia there.

Ghannouchi, who had headed the transitional government since the ouster of president Zine El Abidine Ben Ali on Jan. 14 following a monthlong popular uprising, said he decided to quit after just over six weeks as interim prime minister but was "not running away from responsibility."

"I am not one who makes decisions that can lead to victims," Ghannouchi said during a press conference in the capital Tunis. "I am not an oppressor and will never be."

"This resignation will serve Tunisia, and the revolution and the future of Tunisia," he added.

The interim government is supposed to prepare the country for fresh elections within six months.

Clashes between police and demonstrators flared up in Tunis after people took to the streets in protest against the interim government, which many Tunisians considered to be compromised. Much of the resentment was targeted at Ghannouchi.

Authorities said the protests began peacefully, but were then overtaken by young hooligans.

Mebazaa in a statement said Caid Essebsi "is known for his patriotism, his faithfulness and his abnegation for the benefit of the fatherland," according to Agence France-Presse.

He thanked Ghannouchi for serving Tunisia in difficult times after hardline president Ben Ali's flight to Saudi Arabia in mid-January.