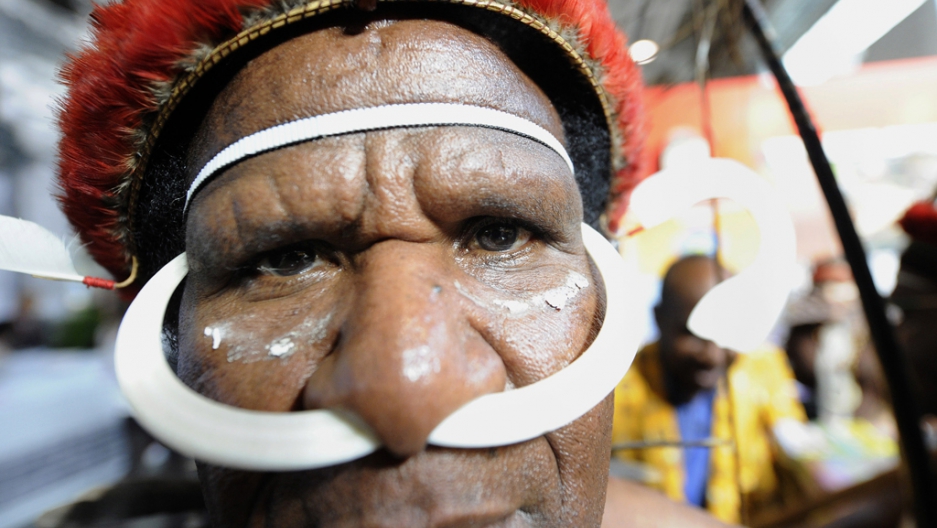 A man from the Indonesian island Papua on March 10, 2010.
Credit: Michael Kappeler
Share

BANGKOK, Thailand — On the remote Indonesian island of Papua, tribesmen have long noticed the curious effect of a shrub called “gandarusa.”

If you chew its leaves often enough, men say, your wife won’t get pregnant.

Indonesian scientists, who have transferred this folk method from the jungle to the lab, claim they can extract the shrub’s active ingredient and mass produce it as an over-the-counter pill.

If they’re right, they will accomplish what Western pharmaceutical giants have researched but failed to deliver for decades: a birth control pill for men.

“With luck, it could be released late this year, but it will probably be sold in stores early next year,” said Sugiri Syarief, the head of Indonesia’s state-run National Family Planning Coordination Board.

Researchers began analyzing gandarusa in 1988, Sugiri said. Animal and human trials began in the 1990s and the plant’s effective compound was patented in 2007.

According to a government report on the drug, it prevents pregnancy by slowing down the activity of certain enzymes in the sperm that help them wriggle into a female’s ovum.

Researchers have tested the pill on two waves of male volunteers: first 36 men, then 120 men. This year, they’ll conduct a 350-man study to reinforce their findings so far: that trial volunteers’ sperm remains healthy but unable to penetrate a woman’s egg.

Men taking the gandarusa pills typically regain the ability to impregnate after 72 days, Sugiri said. “There are no side effects,” he said, though his study notes that some men experienced a boosted sex drive.

How did a far-less developed nation beat the Western world to this breakthrough? And for only $226,000, the amount Sugiri estimates his agency has spent on the project?

Bio-diversity deserves some credit. Indonesia is a lush and fertile archipelago, home to the world’s fourth-largest population and an estimated 7,000 medicinal plants. Potential benefits derived from this diverse range of flora are constantly undergoing study.

Global demand for male birth control appears high, with a 2005 German survey revealing that 60 percent of men in Spain, Germany, Mexico and Brazil are willing to use a new male contraceptive.

But pouring millions into developing a birth control pill for guys still isn’t attractive as a business decision, Lissner said.

German pharmaceutical firm Schering dropped male birth control research projects five years ago. Many other drug companies have done the same. A report authored by Lissner notes that, for decades, pundits have promised a male hormonal birth control method will arrive “in five to 10 years.”

“It’s a nightmare from the ‘for-profit’ standpoint,” Lissner said. “We have to accept that the needs of for-profit entities and the needs of the public don’t always perfectly match.”

Research into the gandarusa pill, however, is backed by a different motive: population control.

Though Indonesia’s population of 237 million is only increasing by about 1.3 percent annually, according to the state’s family planning agency, the nation’s poor do most of the procreating. Roughly half of Indonesians live off $2 a day.

“Everybody has to understand that if we do nothing, the population explosion will be too much,” he said. “We can’t just give men two choices: vasectomy or condoms.”

But Indonesia isn’t the only Asian nation pouring research into male birth control. In China, researchers have tested a hormone-altering pill that proved 95 percent effective.

Indian scientists have developed a polymer that, when injected into vas deferens tubes, kills almost all the sperm before ejaculation. When the polymer is flushed out with a doctor’s assistance, the man is again able to father children.

“A lot of the most exciting work is coming out the developing world,” Lissner said. “When you have incredible brainpower that now has access to good equipment, you start getting some pretty good science.”

But U.S. regulations are likely to prevent American men from accessing these recent developments anytime soon.

Before authorizing a pill’s U.S. release, the federal Food and Drug Administration would likely want scientists to repeat many studies conducted abroad, though some of the data could “potentially be re-used in an application,” Lissner said. The entire process, she estimated, could take five to 10 years.

If Indonesia’s government fulfills its promise, and releases the world’s first cheap, safe, mass-produced birth control pill for men, it will likely require an endorsement from influential religious figures.

Birth control has been depicted as Western “poison” by fundamentalist Islamic groups in Indonesia. Hizb ut-Tahrir, a global movement to establish an Islamic caliphate, has held conferences to sway Muslim youth from using condoms and birth control pills.

According to the Jakarta Post, speakers at a 2009 gathering announced that birth control is “clearly an attempt at genocide that has been planned carefully by the West.”

It is unclear how Islamic hardliners would react to a homegrown pill. The Iranian government has successfully relied on the Quran to promote birth control by highlighting verses that encourage family planning.

Indonesia’s president and other key politicians are ready to publicly support the gandarusa pill, Sugiri said. “The results look really good,” he said. “If everything goes OK, then we’ll want to start promoting this to other countries.”