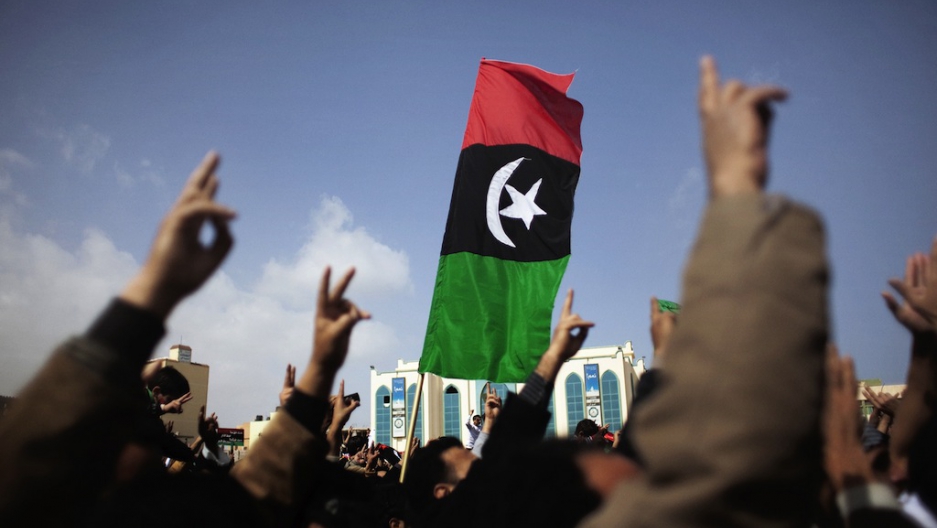 BENGHAZI, Libya — The U.N. Security Council has unanimously adopted an arms embargo against Libya, issued a travel and assets ban on Muammar Gaddafi's regime, and ordered a crimes against humanity investigation into the bloodshed, according to reports.

The council said attacks on civilians by forces loyal to Gaddafi had been incited "from the highest level of the Libyan government," the Australian Broadcasting Corporation reported.

More than 1,000 people have been killed in the unrest, the U.N. estimates.

The council ordered an immediate halt in arms sales to Libya and referred the civilian attacks to the International Criminal Court because it said the deaths "may amount to crimes against humanity."

The travel and assets bans target not only Gaddafi but seven of his sons, his daughter Aisha, other family members and top defense and intelligence officials accused of playing a role in the bloodshed of the past 10 days.

On Saturday, apparently unmoved by international demands that he end a bloody crackdown on anti-government forces, Gaddafi said he would open weapons depots to arm his supporters.

“When needed, all the weapons stores will be opened,” Gaddafi told a crowd in Tripoli’s Green Square.

A small group of foreign journalists were invited to Tripoli Saturday, ostensibly to witness Muammar Gaddafi’s continuing control of the city. "Peace is coming back to our country," Saif Islam Gaddafi, the 38-year old son of the faltering leader, told the press, according to Reuters.

What they found however — confirming witnesses testimonies that have filtered out this past week — was a grisly scene of violence against unarmed civilians and a mounting death toll. While Tripoli's streets have largely been cleared of demonstrators following Friday’s protests, fighting remains intense and blocks of the city are in open revolt.

U.N. Secretary General Ban Ki-moon had called Friday on the U.N. Security Council to take "concrete action" over the mounting political and security crisis in Libya, as pro-government militiamen opened fire on demonstrators in the capital.

France, Germany and the United States drew up the resolution calling for an arms embargo and the freeze on the assets of Gaddafi and his high-ranking officials, AFP reported.

Ban said the crackdown by defiant leader Gaddafi has resulted in needless deaths, human rights violations and a food shortage and has forced thousands to flee the country.

"People cannot leave their houses for fear of being shot by government forces or militias," he said.

"Much larger numbers are trapped and unable to leave," Ban said. "There are widespread reports of refugees being harassed and threatened with guns and knives."

He urged neighboring countries and those in Europe to keep their borders open to allow in Libyans fleeing from the violence.

Much of Libya, especially the east, is now controlled by anti-Gaddafi forces, including military units that have switched sides.

In Benghazi, Libya's second largest city, the opposition has been largely successful in maintaining law and order. Volunteers have taken over the former internal security building and courthouse, organizing the town’s security, cleaning up, providing food, assisting foreign journalists, and beginning the long road toward good governance. The only gunfire on the streets has been celebratory, uniformed traffic police direct traffic in the center of town and a few of the city’s banks have reopened.

"For 42 years we were kept alive-dead," said Hana Kahlig, a human rights organizer volunteering at the courthouse. "We didn't have freedom of speech, education is below zero. He [Gaddafi] treated us like cockroaches, forcing us to live without lights or water. Now we want to live with freedom, just like everyone else."

However, Gaddafi still holds the most of Tripoli, which is home to 2 million of Libya's 6.5 million people.

Militiamen in the capital opened fire on protesters Friday who had congregated for the first significant anti-government protest in the capital in days. Gunmen standing on rooftops and in the streets shot at crowds with automatic weapons and an anti-aircraft gun.

"It was really like we are dogs," a man in Tripoli told AP.

Amid the fighting, Gaddafi appeared and spoke to a crowd of supporters in Green Square, a bastion of pro-regime support over the past nine days of unrest, according to reports.

Of the rebels who've taken control in many parts of the country, he said: "Respond to them, put them to shame" and "we can triumph over the enemies."

Pro-Gaddafi militiamen and troops in cities in the West of the country also reportedly lashed out at protesters Friday.

Late on Friday, Gaddafi's son, Seif al-Islam, said the number of deaths in the 10-day uprising had been exaggerated, though he confirmed the Libyan air force had bombed four ammunition depots.

He reiterated his father's statements Thursday blaming Al Qaeda for the uprising. Gaddafi claimed the forces of Osama bin Laden had given hallucinogenic drugs to youth of Libya — "in their coffee with milk, like Nescafe" — to get them to incite unrest.

Libya's deputy U.N. ambassador, Ibrahim Dabbashi, told reporters at a U.N. news conference in New York Friday that Gaddafi is a "mad man" and the international community must intervene to stop the violence before more civilians die.

"I don't know how they are disposing of the bodies of the victims," he said. "But I am sure that the number is by thousands, not hundreds. This is a mad man. This is a mad man, and he is psychologically not stable. So I think he will stay until the moment he [dies] or he will commit suicide."

Libya's ambassador to the U.N., Mohammed Shalgham, followed in his deputy's footsteps and also defected. Like Ban, he pleaded for the U.N. Security Council to act against Gaddafi.

“Please U.N., save Libya,” he said. “I tell my brother Gaddafi, leave the Libyans alone.”

The volatile situation in Libya, North Africa’s biggest oil producer, and rumblings in Saudi Arabia are being blamed for spiking gas prices.

The national average price for regular gasoline at the pump Friday jumped the most in almost four years, according to Cincinnati.com. The 5-cent increase to $3.24 a gallon Friday was the biggest gain since Feb. 26, 2007, a spokesman for AAA said. The biggest one-day rise ever was Sept. 2, 2005, when gasoline added 16 cents as Hurricane Katrina shut U.S. Gulf Coast refineries.

On Thursday, Saudi Arabia calmed oil markets by saying that it would increase production to cover shortfalls from unrest in the Middle East. But on Friday, Texas oil magnate T. Boone Pickens told GlobalPost's David Case that Saudi Arabia may not have enough capacity to do so.

Meanwhile, the United States imposed unilateral sanctions against Libya Friday and closed its embassy in Tripoli. The sanctions include the freezing of billions of dollars in government assets as well as the American-held assets of Gaddafi, his children and family.

Just after the last plane carrying Americans who wanted to leave Libya took off from Tripoli, the Obama administration warned that any high-ranking Libyan officials who supported the violent crackdown could also see their assets frozen and could face prosecution for war crimes.

It remains unclear what effect the moves by the United States might have on Libya or the crackdown. Sanctions take time to be put in place, and Gaddafi seems adamant about doing whatever is necessary to remain in power.

"With Colonel Gaddafi killing more of his people every day in a desperate bid to remain in power, it was not clear that these actions would do much to mitigate the worsening crisis," reports the New York Times.

The director of the Justice and Democracy for Libya group based in Washington, DC, Ashraf Tulti, told Al Jazeera that sanctions will hurt the Libyan people but not the regime.

French President Nicolas Sarkozy ordered Gaddafi to step down, becoming the first leader of a major nation to do so.