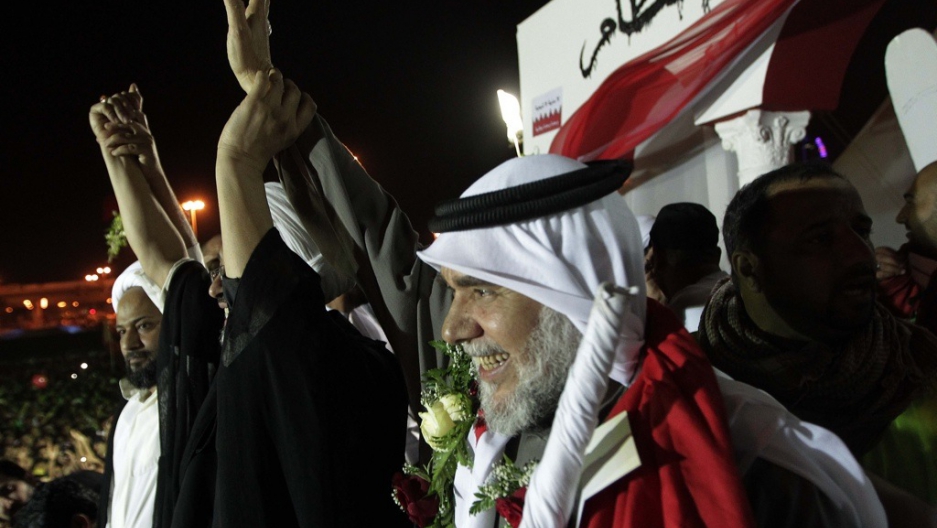 Bahraini Shiite opposition leader Hassan Mashaima, left, greets anti-government protesters gathered at Pearl Square in Manama on February 26, 2011 upon his return from self-imposed exile following assurances from the Gulf kingdom that he had been pardoned of terrorism-related charges. Bahrain's protests put it at the center of the bitter divide between Sunnis and Shias in the Gulf.
Credit: Joseph Eid
Share

RIYADH, Saudi Arabia — In the fraught divide between Sunni and Shia Muslims of the Arab world, the tiny island state of Bahrain is the next crucible of combat.

Unprecedented pro-democracy protests there by the Shia community have had a longer reach than what would normally be the case in a country of only 738,000 for one simple reason: Bahrain’s close ties to its huge neighbor, Saudi Arabia.

The two countries are linked by a 16-mile, multi-lane causeway and by the shared commitment of their Sunni ruling royal families to remain in power. Oil-rich Riyadh also financially supports petroleum-poor Bahrain.

The two states are also determined to thwart what they regard as hegemonic attempts by Iran, which holds itself out as the champion of Shia rights, to control the Gulf region, and in particular, to extend its influence in Bahrain’s internal affairs.

“Both Saudi Arabia and Iran have an interest in Bahrain, and what happens there would reflect on the strategic balance in the Gulf region,” said Fares Braizat of the Qatar-based Arab Center for Research and Policy Studies.

Most of Bahrain’s street demonstrators are Shia because around 70 percent of the island’s population are Shia. The engine of their protests is a long-felt political and economic marginalization by the ruling Sunni elite, including the Al Khalifa royal family.

In Tunisia, Egypt and Libya, recent protests have had “a clear narrative of people against despotic governments,” said F. Gregory Gause III, an expert on the Gulf area at the University of Vermont. But countries like Iraq, Bahrain, Kuwait and Saudi Arabia that have numerically significant Shia populations allow “a sectarian element” to be easily woven into demonstrations, he added.

Bahrain is “at the forefront of this because even though there are plenty of Sunni Bahrainis who want political reform,” said Gause, “everything in Bahrain comes down to sectarian differences. So if there is more violence in Bahrain, it will definitely worsen sectarian tensions, particularly in the Gulf.”

Saudi Arabia is the most challenged by what has been happening in Bahrain. The opposition’s most oft-repeated demands more or less mean the establishment of a constitutional monarchy. If this comes to pass, it would present Saudi Arabia with an awkward example of a neighboring royal family giving up a great deal of its political control. So far, that is an example the Saudis are not inclined to follow.

Second, a more democratic system in Bahrain would naturally increase the Shia population’s political potency — a template that might embolden Saudi Arabia’s Shia minority. Estimated at between 10 and 15 percent of the kingdom’s 22 million citizens, Saudi Shias live mainly in the oil-rich Eastern Province. Like their Bahraini peers, they also complain of being treated like second-class citizens.

Apart from these domestic concerns, Saudi Arabia is nervous about Iran taking advantage of Bahraini Shias’ new assertiveness and gaining influence there. A major reason for the deepening divide between Sunni and Shia in the Arab world has been Iran’s perceived meddling in Arab affairs, including its support of Hezbullah in Lebanon and Hamas in Gaza. In Iraq, the U.S. toppling of Saddam Hussein’s Sunni minority government led to Shia dominance in Iraqi politics, which gave Iran new sway there.

“There is a real fear Iran will put its hand in the Bahrain situation,” said Tawfiq Alsaif, a Saudi Shia intellectual in Dammam. “Until now, Iran is watching. But it may try to unite the [Bahraini] opposition like it did in Lebanon and Iraq ... Everyone wants to avoid Iranian involvement.”

In phone interviews, Bahraini Shia activists said that fears of Iranian insinuation into Bahrain’s domestic affairs are overblown. Despite irredentist sentiments among some Iranian officials, who have occasionally referred to Bahrain as Iranian territory, Tehran has stayed in the background during the recent protests, the activists said.

“Iranian diplomats are the only diplomats in Bahrain who don’t meet anybody, [unlike] like the Americans, the British, the French because they know the sensitivity of the issue,” said Nabeel Rajab, president of the Bahrain Center for Human Rights.

Besides, added Rajab, Shia in Bahrain “don’t see Iran as a model for democracy.”

Abduljaleel Al Singace, a senior official of Bahrain’s Haq Party, agreed that Sunni Gulf governments are worried about Shia political empowerment in Bahrain but said they were “magnifying the sectarian issue” to justify rejecting the opposition’s demands.

“People are asking for social justice, for participation in public life, an end to corruption and for good governance — these demands are not sectarian-based,” said Al Singace.

Both men accused Bahrain’s government of raising Iran as a scare tactic to frighten its own Sunni community and the West, including the United States, which has a huge naval base in Bahrain.

Saudi Arabia’s Shia community has also reacted to Bahrain’s unrest in a low-key way. There have been a couple of short, peaceful protests by Shia to demand the release of Shia prisoners held without charges.

The Saudi government responded by staying away from the demonstrations and releasing eight or nine Shia prisoners in recent days, including one arrested for writing about Shia grievances online.

As in Bahrain, Saudi Shia community leaders point out that the political reforms they are asking for are the same one Sunnis are also demanding.

“That’s the good of Tunisia and Egypt,” said Alsaif. “People have started to understand that their grievances and problems [lie in] the lack of the rule of law and a constitutional basis … in a national context.”