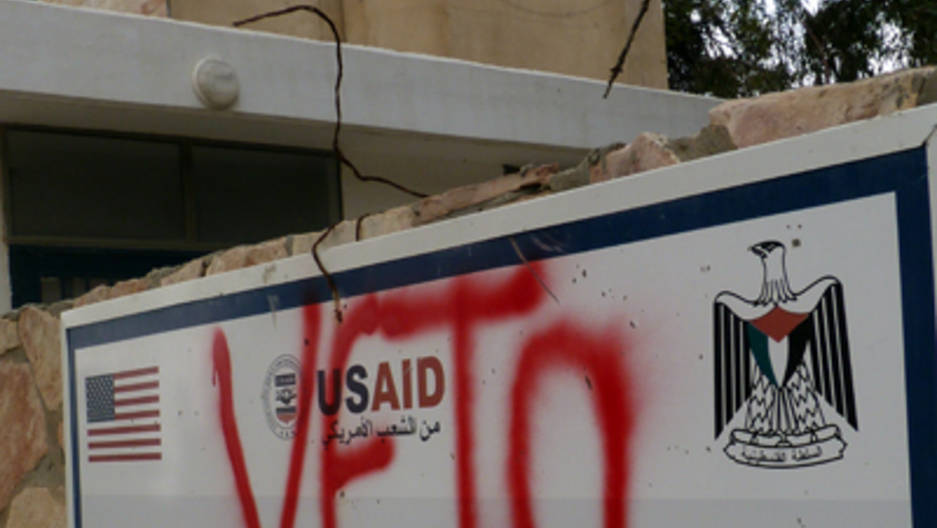 Share
By Matthew Bell Palestinians called for a "day of rage" Friday to vent their frustration with the United States. But it never happened. Last Friday, the US vetoed a United Nations Security Council resolution that would have condemned Israeli settlements in the West Bank and East Jerusalem. Without the American veto, the resolution would have passed unanimously. In recent days, West Bank Palestinians have held several demonstrations to denounce the Obama administration for vetoing a UN resolution that echoed America's own stated policy on Israeli settlements. Officials from the Palestinian Authority have condemned the veto. But they have also shown caution. "I'm disappointed today's demonstration was called off," said a 20-something Palestinian in Ramallah who gives his name as Mohammed. "The uprisings taking place in the Arab world hold a lesson for Palestinians. They show how the power of freedom, democracy and change can sweep away fossilized regimes." Palestinian activist and photo journalist, Muhib Barghouti said Palestinian leaders are acutely aware that they themselves could become the targets of a new popular uprising. Deflecting frustration "No one was surprised by the American veto," Barghouthi said. "But Palestinian officials are using it to deflect popular frustration away from their own shortcomings, and towards the US administration." Barghouthi said that people are not actually opposed to Palestinian President, Mahmoud Abbas. "People are against corruption," he said. "They're against shady business deals. And they're deeply disappointed in the state of divide between the Fatah-controlled West Bank and Hamas-controlled Gaza Strip." "Without Palestinian unity," Bargouthi went on to say, "there can be no new elections and without elections, there can be no unity. It's a chicken and egg problem." That's not to say Palestinians aren't angry at the United States right now. In the West Bank village of Bilin, just outside Ramallah, there have been weekly protests against Israel's separation barrier for the last six years. Today, demonstrators also raised their voices against the United States. One protestor from Bilin said the American veto in the UN has proved to the Palestinian people that the US is biased in favor of Israel and that it's standing in the way when it comes to getting rid of Israeli settlements. Boycotting the US Protest organizer, Iyad Burnaht explained that local Palestinian committees are now going to boycott US officials and agencies. "We decided not to let the American government enter our villages," Burnaht said. "If, for example, someone from the consulate or the ambassador shows up, because they have come before," he said. "Now, we cannot do it." Burnaht said the so-called popular resistance committees are also going to demand the same of the Palestinian Authority. "The PA has to stop everything, all the contacts with the American government and with the Israelis," he said. "Change is coming to the whole Middle East," Burnaht said. "The Palestinian territories are no exception." It's not clear how far Palestinian officials are willing to go along with such demands. The Palestinian Authority is highly dependent on foreign aid and the US is its single biggest donor.