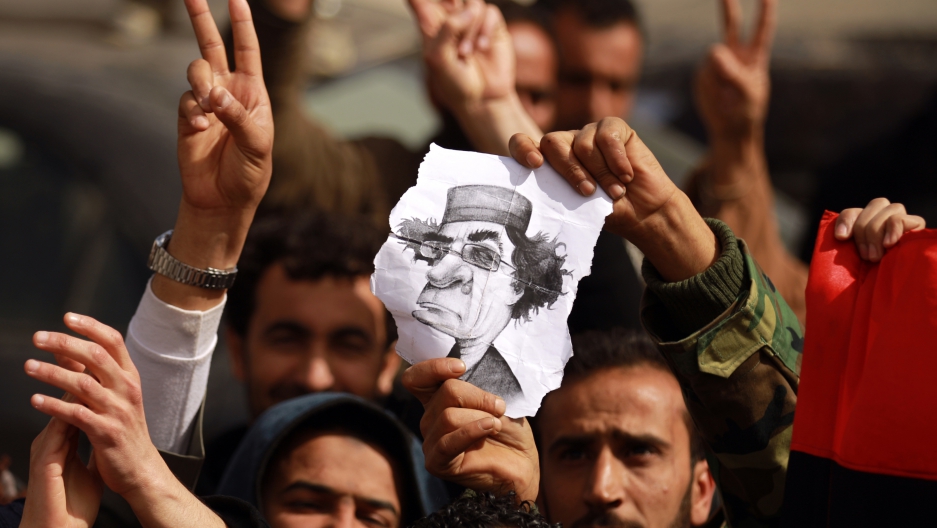 Libyan protesters flash the "victory" sign and hold a caricature of leader Muammar Gaddafi during a rally in the eastern city of Tobruk on Feb. 24, 2011 as residents of Libya's dissident-held east vowed to march on the capital Tripoli.
Credit: Patrick Baz
Share

In a Thursday speech relayed to state television by telephone, he said Qaeda forces had given "hallucinogenic" drugs to youth in Libya — "in their coffee with milk, like Nescafe" — to get them to incite unrest.

Directly addressing the people of Zawiya, the city just outside Tripoli where his forces earlier in the day shelled a mosque sheltering anti-government protesters, he said: "Shame on you, people of Zawiya, control your children."

"They are loyal to bin Laden," he said, referring to those involved in the uprising. "What do you have to do with bin Laden, people of Zawiya? They are exploiting young people ... I insist it is bin Laden."

He added that people "with any brains" would not take part in the demonstrations.

Independent news reports do not link Al Qaeda to the uprising.

Forces loyal to Gaddafi were fighting fiercely Thursday to regain control of the country. Army units and militiamen struck back against rebelling Libyans who have wrested control of cities close to the capital.

Anti-government forces on Wednesday claimed to have taken control of the country's third largest city, Misrata, about 125 miles east of Tripoli.

Gadhafi's son Seif al-Islam Gaddafi, meanwhile, claimed Thursday that the number of people killed by government crackdowns on protesters had been exaggerated, according to Voice of America.

Human rights groups say they have confirmed about 300 deaths. But witnesses suggest the number is far larger, and Italian Foreign Minister Franco Frattini said Wednesday that more than 1,000 people had likely been killed in Libya's week-long uprising.

In what was his second national address since the protests erupted, Gaddafi expressed his condolences for those killed and said that he had become a "symbolic" leader who had no authority to impose rules on Libyans.