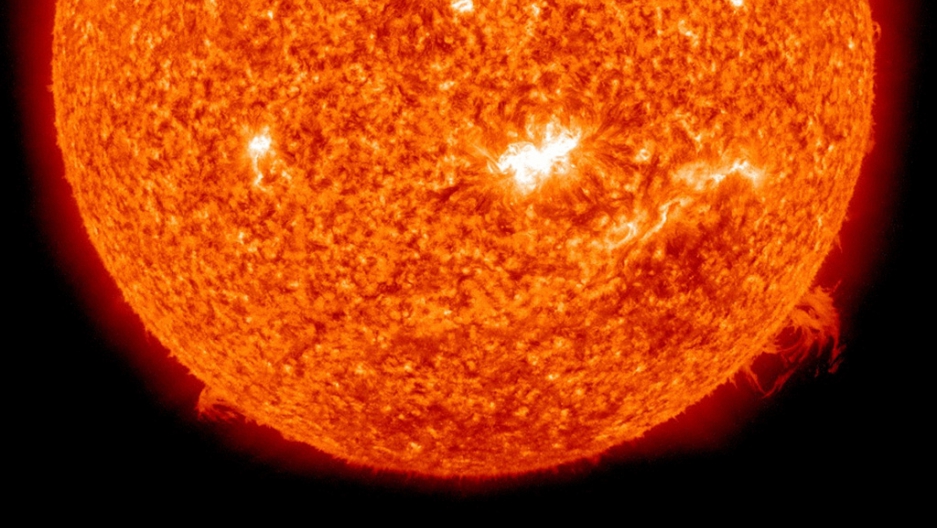 The first strong solar flare in four years occurred on Feb. 14, 2011, as captured here by NASA's Solar Dynamics Observatory spacecraft. This solar flare led to warnings that a geo-magnetic storm could disrupt communications and electrical supplies once it reaches the earth's magnetic field. Another solar storm is hitting the Earth on Jan. 24, 2011.
Credit: NASA/Solar Dynamics Observatory
Share

In florid 19th century prose, the New York Times described it as a “beautiful coronal of light … overpoweringly brilliant and beautiful.” Thousands of people “witnessed it from housetops and from pavements.”

The solar flares so brilliantly lit the nighttime sky in crimson and green that people could read without lamps. Urbanites thought their cities had caught fire. “Gold miners in the Rocky Mountains woke up and ate breakfast at 1:00 a.m. thinking the sun had risen on a cloudy day,” according to an account in Scientific American.

That was Sunday August 28, 1859, the date of the biggest solar super-storm in recent history. Most people regarded it as an unexplainable oddity, a brief if magnificent distraction from their lives.

But scientists meeting in Washington this week say the next such major storm could wreak havoc on our lives.

What’s relevant now, from that 1859 event, is how deeply it affected the telegraph, the advanced technology of the era. Telegraph technicians in Baltimore — unknowingly operating under a celestial shower of magnetic currents from the sun — struggled for many hours to transmit a brief news article; the lines from Boston were so suffused with atmospheric electricity that operators filed their story without even using the battery.

The sun will inevitably erupt again. Next time around, it will affect a globe of more than 6 billion people bound together by an elaborate infrastructure of oil pipelines, electric grids, satellites and GPS-dependent devices (including standard cell phones), all of which will be at risk. “The impact of the 1859 storm was muted only by the infancy of our technological civilization at that time,” wrote Sten F. Odenwald and James L. Green in the Scientific American article.

A 2008 study by the prestigious National Academy of Sciences concurred: “It is not unreasonable to assume that an event of such magnitude would lead to much deeper and more widespread socioeconomic disruptions than occurred in 1859.”

These events are far more common than one might realize. Although massive storms of the magnitude seen in 1859 are thought to happen once in 500 years, smaller but still powerful storms occurred in 1921 and 1960. In March 1989, a relatively minor one caused Quebec’s power grid to collapse, leaving millions of people without electricity for about nine hours. Another storm in January 1994 knocked out two satellites, cutting communications across Canada.

Solar storms emit massive bursts of electromagnetic energy, showering charged particles down on the Earth. These can damage satellites and cause dangerous electrical currents in power lines and oil pipes.

The sun’s volatility waxes and wanes on a cycle of roughly 11 years. The current phase began in January 2008, and is expected to peak around 2013 or 2014. Already, earthlings are feeling the rising violence of these storms. The biggest recent eruption, which occurred on Feb. 14, disrupted radio signals in China.

"Even if this is a really lackluster solar cycle — as it looks like it's shaping up to be — that doesn't mean you can't have a real bell-ringing event," Joe Gurman of NASA's Goddard Space Flight Center, told Space.com.

Normally prone to understatement, scientists say we should worry, or at least prepare for a potentially catastrophic event. “We have to take the issue of space weather seriously,” UK chief scientist Sir John Beddington said this week at a meeting of the American Association for the Advancement of Science.

In the event of a major storm, researchers anticipate a widespread power outage. If such an outage lasts, they say that this could lead to “disruption of the transportation, communication, banking and finance system, and government services; the breakdown of the distribution potable water owing to pump failure; and the loss of perishable foods and medications because of lack of refrigeration,” according to the National Academy of Sciences.

To determine just how significant such an event could be, scientists from the Metatech Corporation simulated the damage that the 1920 solar storm would inflict on modern infrastructure. They concluded that 130 million people could be left without power, and more than 350 electrical transformers could be permanently damaged, with the greatest U.S. vulnerability in the north west and East Coast.

The price tag for such a severe solar storm of this magnitude, according to Metatech, could run from $1 trillion to $2 trillion in the first year, with a recovery time of 4 to 10 years.

"There are two things we need to be thinking about.” Beddington told reporters and scientists in Washington this week. “We need to think about prediction – the ability to categorize and give warning about when particular types of space weather is likely to occur. The second is about engineering. Thinking about particular sectors and their vulnerability to particular types of space weather – that is a complicated issue and we need to think hard about how to do that.”