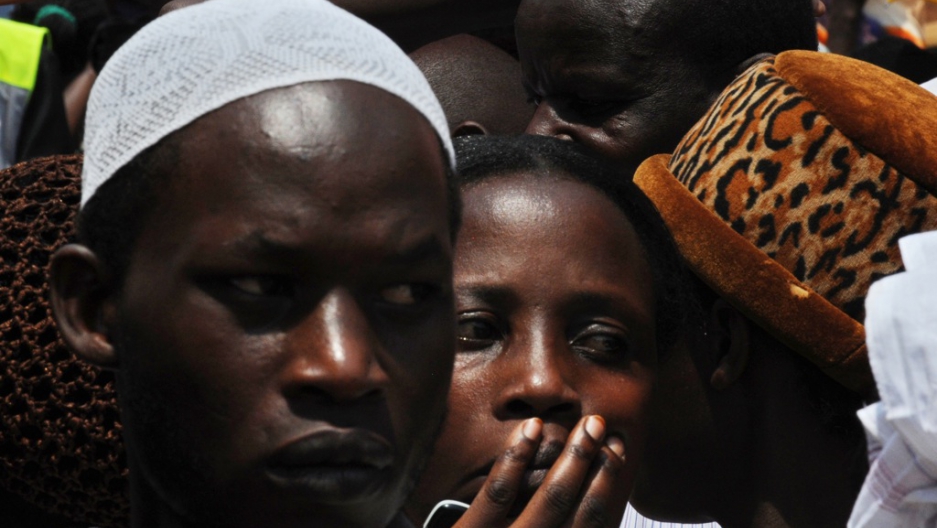 Voters wait in line at a polling station in the Ugandan capital Kampala on Feb. 18, 2011.
Credit: Roberto Schmidt
Share

NAIROBI, Kenya — President Yoweri Museveni took more than two-thirds of the votes in a comprehensive election victory in Uganda that will extend his 25-year rule for another five years. But the poll was criticized by international observers and the result rejected by the main opposition party, which has threatened Egypt-style street protests.

Badru Kiggundu, chairman of Uganda’s Electoral Commission, said that with all the votes counted Museveni had won 68.4 percent, a close to 10 percent stronger showing than in the last election in 2006 and one that reverses a downwards trend in the president’s popularity over the last three elections.

His nearest rival Dr. Kizza Besigye, who won more a third of the vote five years ago, only managed to win 26 percent. Two high-profile opposition figures from northern Uganda, Norbert Mao of the Democratic Party and Olara Otunnu of the Uganda People’s Congress, scored 1.9 percent and 1.6 percent respectively. Four other candidates got less than 1 percent each.

Museveni has ruled since 1986 when he seized power after a series of guerrilla wars that overthrew Idi Amin and Milton Obote, two dictators who had presided over years of brutality and ethnic strife.

For the first two decades he ruled under a single-party system only facing his first real electoral challenge in 2006. The year before he had succeeded in having constitutional term limits removed, opening the door to the possibility that he may rule for life.

Assuming Museveni completes his next five-year term after a swearing-in ceremony due in May, he will become one of Africa’s longest-standing rulers on a continent where leaders frequently cling to power, but where a rash of street protests are challenging the hitherto iron grip of a series of autocrats.

Elsewhere in Africa only Eduardo dos Santos in Angola (since 1979), Paul Biya in Cameroon (since 1982), Teodoro Obiang Nguema in Equatorial Guinea (since 1979) and Muammar Gadaffi in Libya (since 1969) have ruled for longer than Museveni. Burkina Faso’s Blaise Campaore, Chad’s Idriss Deby, Sudan’s Omar al-Bashir and Zimbabwe’s Robert Mugabe have all held power for more than 20 years.

Tunisia’s and Egypt’s leaders have both fallen to mass protests this year while Gadaffi has sought to violently crush protests against his rule that erupted in the eastern city of Benhazir last week. Human rights groups say that more than 200 people have so far died in clashes. Protests have also erupted in Morocco and Yemen.

International observers in Uganda praised the largely peaceful election but criticized the use of state resources by the ruling National Resistance Movement (NRM) to fund its expensive campaign, and the widespread incidence of bribery.

Billie Miller, head of the Commonwealth observer group, said the “commercialization of politics” was a concern and added that massive spending during the campaigns skewed the vote in favour of the NRM.

“The main concern regarding the campaign and indeed the overall character of the election was the lack of a level playing field,” she said. “By all accounts, the 2011 elections were Uganda’s most expensive ever.”

At a press conference in Kampala on Sunday as final votes were being counted, Besigye rejected the results alleging fraud, bias, intimidation and bribery. He said he would not recognize Musveni’s leadership or his “illegitimate government."

After losing to Museveni in both 2001 and 2006, Besigye appealed to the courts, which agreed there had been fraud but ruled it was not enough to affect the results.

During campaigning for this election he said he would, this time, appeal to “the court of public opinion” but on Sunday he stopped short of repeating his threat of Egypt-style street protests.

Another oppositionist, Otunnu who scored less than 2 percent, was more forthright. "I will not accept the results and all Ugandans should not accept it," he said. "It is now upon us Ugandans to do whatever it takes. We shall not accept subjugation and suppression. We shall confront [Museveni].”

There have been no demonstrations so far and on the streets of the capital there was a feeling that protest would be futile. On Sunday yellow-shirted backers of Museveni took to the streets of Kampala in celebration, their jubilation contrasting starkly with the heavy deployment of riot police and the contingents of soldiers carrying out foot patrols, assault rifles at the ready.

Eric Bukenya, a 26-year old taxi driver, said he had voted for Besigye because he has never known any leader but Museveni and wants to see a change. As a group of a dozen soldiers filed by he said, “These people are here to scare us.”