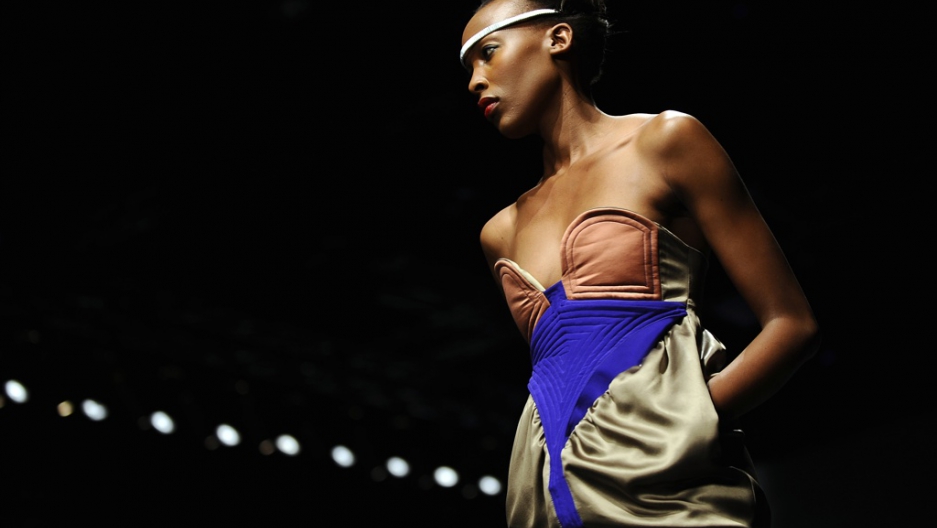 Johannesburg's growing fashion industry is adding glamor to a revival of the city's downtown. Here a model struts in a creation by Sakina Msa.
Credit: Gianluigi Guercia
Share

JOHANNESBURG, South Africa — When top South African designer David Tlale’s models took to the catwalk during Johannesburg Fashion Week, they were strutting where no fashion show has gone before: a bridge in the city’s notorious downtown.

Tlale’s fall/winter couture show was held Saturday on the Nelson Mandela Bridge, an iconic landmark in Johannesburg’s inner city and an area long plagued by a reputation for crime and urban decay.

The show, titled “Made in the City,” was inspired by the people who work downtown, Tlale said, and included 92 models — one for every year of Mandela’s life.

David Tlale is known in particular for his dramatic dresses with creative use of texture and shape. Sophisticated and daring designs have made him popular among South Africa's celebrity crowd. He said with this show he wants the world to see that fashion from Africa is more than just traditional African prints.

“We wanted to showcase the beauty of the city,” he said. “Perceptions need to change about what comes out of Johannesburg.”

For the first time, Johannesburg Fashion Week was held in the downtown core instead of in the wealthy suburb of Sandton. Fashionistas traveled on the city’s rapid bus system between shows at landmarks including a warehouse known as the Bus Factory and a new venue called Fashion Kapital, a hub of offices, studios, restaurants and shops that opened last week.

The move is an important boost to the slow but steady revitalization of an area that slid downward into crime and neglect starting in the end days of apartheid, when white people and companies fled to the suburbs. As the inner city emptied out, it became notorious for rapes, murders, carjackings and the phenomenon of “hijacked” buildings, where criminals take control and illegally collect rent from squatter tenants.

More than two decades later, there is no quick fix to the continuing problems of downtown, but change is visible in pockets of Johannesburg’s city core that are becoming trendy arts and commercial areas. The successful Arts on Main project, for example, has seen warehouses turned into studios, galleries and creative industry offices, while nearby Main Street Life has apartments, a boutique hotel and an art-house cinema.

The area around Gandhi Square, the main bus hub, has shed its crime-filled reputation and now caters to white-collar office workers with shops, restaurants, outdoor cafes and pedestrian streets.

Lindiwe Kwele, CEO of the Johannesburg Tourism Company, said that there has been a great deal of improvement in the inner city because of rejuvenation campaigns and investment, but many residents of Johannesburg (often shortened to “Joburg”) haven’t realized this yet.

“The inner city is becoming vibrant,” she said. “It’s about time that people rediscover Joburg. So many people have not taken the time to go back to the inner city.”

“It was the right time for us to move, because of the revival of the city,” Tlale said. “It’s really exciting here right now.”

The Johannesburg Development Agency is hoping that fashion week also provided an economic boost to the downtown, noting that New York Fashion Week is worth about $770 million to that city’s economy. To this end, African Fashion International, the group that owns Joburg's fashion week, have partnered with South African tourism and development agencies to try and use fashion to promote the city and its creative talent.

Tourism agencies are already marketing Johannesburg as Africa’s fashion capital. It is a hot spot for shopping on the African continent. Seventy percent of visitors come from other African countries, such as Ghana and Nigeria, and many of them shop while in town, according to the Johannesburg Tourism Company. Now the focus is on lifting the profile of local designers.

Last year, two South African cities — Cape Town and Johannesburg — made it to a list of the world's top fashion cities, squeaking in at numbers 23 and 25, according to U.S.-based Global Language Monitor, which tracks trends in language usage.

Sugen Pillay, global manager of events for South African Tourism, said that in promoting “fashion tourism,” in particular to European and American tourists as well as a growing number from India and China who are visiting the country, the focus is on appealing to young professional travelers looking for a different cultural experience.

“I think a lot of people don’t know that the city of Johannesburg has such diversity and energy,” he said. “Joburg is the heartbeat of culture in South Africa.”