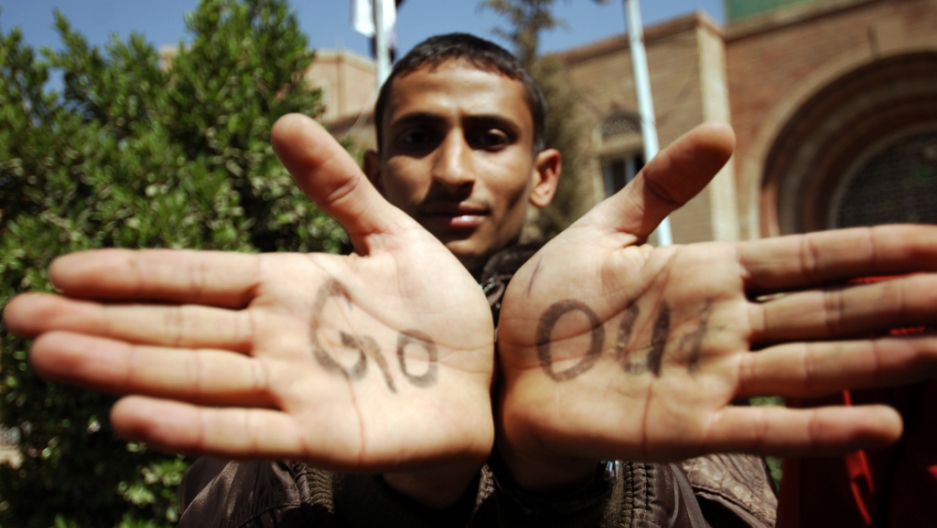 An anti-regime protester shows the palms of his hands as he and others gather inside the grounds of the Sanaa University in the Yemeni capital on Feb. 16, 2011, on the fifth day of consecutive protests against the regime of Yemeni President Ali Abdullah Saleh.
Credit: Mohammad Huwais
Share

SANAA, Yemen — Police opened fire on demonstrators in front of Sanaa University on Saturday, marking the first time people were shot at during protests in the capital. Four people were wounded, according to GlobalPost's correspondent in Sanaa, Jeb Boone.

Pro-government thugs continued to clash with anti-government protesters after people dispersed following the gunfire, in a clear sign that protests were continuing to gain momentim in the ninth consecutive day.

In the past two weeks Yemen has been rocked by some of the biggest anti-government demonstrations the country has seen in a decade.

Large-scale protests also took place in other cities across Yemen, including Taiz and Aden. By some reports, tens of thousands in total came out across the country. In the city of Taiz, at least two people were killed during protests after a grenade exploded in the middle of the city's central square. It was unclear who was responsible.

President Ali Abdullah Saleh has ruled Yemen for 32 years, first as president of North Yemen and then, after unification with South Yemen in 1990, as leader of the newly united republic.

At the beginning of January, President Saleh proposed a constitutional amendment that would allow him to stand for re-election in the next presidential ballot in two years time.

However Yemen’s opposition coalition, which includes the Islamist party, Islah, as well as socialist and Nasserite parties have vehemently opposed the proposed amendments. Eyeing protests breaking out across the Middle East as well as increasing dissent growing within Yemen, Saleh promised he would step down in 2013 and that his son, Ahmed, would not succeed him.

He also said constitutional amendments proposed by his party would be frozen and parliamentary elections scheduled for April would be delayed in order to allow for electoral reform.

"No extension, no inheritance, no resetting the clock," he said, making reference to ruling party proposals to abolish term limits that would have allowed him to run again.

After three decades in power, Saleh faces widespread complaints of corruption and the concentration of power within his tribal sub-group, the Sanhan clan.

Large areas of the country are already in open revolt against his regime, with a breakaway movement in the south, attacks on the security services by Al Qaeda in the Arabian Peninsula (AQAP) and a de-facto semi-autonomous area under the control of northern rebels.

The mainstream media has focused largely on the political objectives of the protesters — some of whom are calling on Saleh, who has ruled Yemen for 32 years, to step down. But many protestors are calling for changes in their livelihood as well as political reform.

"Together we fight against poverty, corruption and injustice," protesters at Sanaa University chanted Thursday, minutes before they were set upon by a swarm of pro-Saleh supporters, mainly middle-aged men wielding batons and cattle prodders.

“They are here because of poverty,” said Hani Al-Maydsma, a 30-year-old employee at Yemen’s financial ministry, beckoning towards the students. “People are dying, the economy is dying. Everything is damaged.”

Ali Tayman, a tribal sheikh from Marib province, said he had travelled to Sana’a to call for the president to step down. He said he refused to accept bribes of allegiance from the government. “Our authority has stolen all the money from our people,” he said.

One banner hanging on the university gates reads simply: "Look at the gap between rich and poor."

For the average young Yemeni, daily grievances are far more important than politics. Graduates hope to find a job. Young men struggle to accumulate enough money to be able to get married. New couples battle with price hikes. Nearly half of the population lives on less than $2 a day and social development indicators — such as child malnutrition, maternal mortality and education — remain extremely poor, according to the United Nation’s World Food Program.

Yemen is ranked 138 in a list of 179 states on the United Nations' Human Development Index (HDI).

Many of those taking to the streets are young unemployed men who, despite making up a large proportion of Yemen’s population, find themselves economically and socially marginalised and living at the fringes of society.

“I came today because I had nothing else to do. I’d rather be here protesting than sitting on the roadside with my friends,” said Jamal Al-Fadli, 19, who scratches a living by taxiing people around Sana’a on his motorbike.

Yemeni youths like Jamal face daunting economic and political hurdles on the road to adulthood. Nearly half of Yemen’s population of 23 million people are under the age of 15, 70 percent are under 25. With youth unemployment currently at over 50 percent and expected to rise further, this youth bulge presents a demographic and economic time bomb.

Currently growing at a rate of 3.2 percent, Yemen’s population is set to double by 2030.

“The government has expanded universities and educated a swelling cohort of youth, without laying the groundwork to employ them. The number of graduates has overwhelmed the government's capacity to hire,” he said.

As well as economic alienation, young Yemenis also face social and political isolation. A 2008 USAID study assessing the state of Yemen’s youth across job sectors found that 40 percent of those interviewed expressed frustration, describing the Yemeni job market as one in which only those with connections and power can obtain decent employment.

Yemen’s young men and women often feel alienated by social expectations like marriage and starting a family that are no longer achievable as a result of the deteriorating economic and political situation.

Students have played a major part in the demonstrations and Sana’a University has recently become a hub for protests launched against the government.
Amid the recent unrest, governments across the region have announced measures to create economic opportunities. Earlier this week, Saleh announced that he would waive this year’s remaining fees for students enrolled in public universities. He also promised to establish a fund to help create jobs for recent university graduates.

“Waivering tuition fees will not stop students from protesting,” said Rudhwan Masude, the head of the student union at Sana’a University. “Anyway most of the students have already paid their fees. There just aren’t enough jobs to go round. The best students don’t think twice before leaving the country to seek work elsewhere.”

Students leaving secondary school complain they are not adequately prepared for the world of work.

“My school education was completely disconnected from the realities of employment, I was taught to memorize theoretical concepts, when I should have been learning English,” said Taha Al-Matari, a student of computer science at Sana’a University. “Our education system delivers quantity, but not quality.”