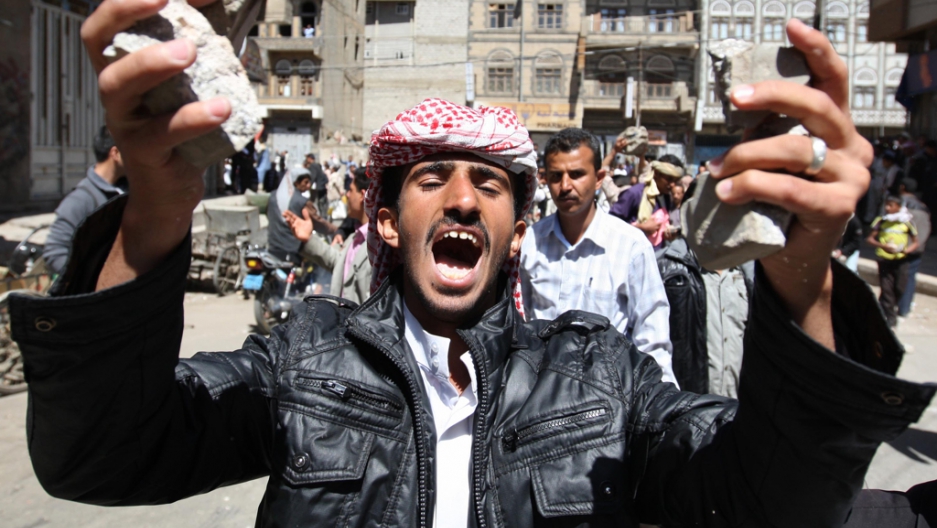 a Yemeni anti-government protester shouts slogans calling for the ouster of President Ali Abdullah Saleh as he holds stones in his hands during clashes with regime loyalists in central Sanaa on Feb. 17, 2011.
Credit: Ahmad Gharabli
Share

SANAA, Yemen — Riots broke out near Sanaa University in the early afternoon on Thursday as anti-government demonstrators clashed with supporters of Yemeni president Ali Abdullah Saleh.

No police or military were deployed to the university, even as some rioters fired pistols indiscriminately into the crowd of mostly student demonstrators, who first began to peacefully gather at the university in late January after the successful popular uprising in Tunisia.

"This is democracy in Yemen. No one can express their opinion," said Ibrahim al-Thowri, 35, a student a Sanaa University, as shots rang out. "The students came out of the university to peaceably assemble and were attacked by Saleh's men."

Red Crescent personnel were on the scene treating injuries. Al-Thowri said he had seen at least 10 injured people being carried away to a nearby hospital.

As demonstrators began burning tires, filling the air with black smoke, more people began to join in the violence. As hostility reached a fever pitch, rioters broke down several sections of a large iron fence separating two lanes in the road. Some pro-government protesters hurled stones from a high footbridge into the crowds below.

The two sides pushed each other back and forth in a standoff that lasted for more than an hour.

Anti-government rioters carried sticks, pipes and chains while they chanted, "The people want the regime to fall."

Radfan al-Wajia, an anti-government demonstrator, said that most of those in the pro-Saleh camp were paid to take part in the counterdemonstrations.

"The pro-Saleh demonstrators are a mix between those that are paid to be here and soldiers wearing regular clothes," he said, adding that he was told that each person attending the pro-government rally was paid the equivalent of $10.

Professor Tariq Noman, a graduate of Cambridge University and surgeon at a nearby hospital, said he also believed the pro-government faction was financially motivated.

"Saleh is protecting himself by turning our society against itself," he said. "Most of the people involved in the pro- government demonstrations are soldiers or police officers.”

As trucks equipped with loud speakers, which were blasting pro-Saleh slogans, arrived at the scene, the two rival camps began to disburse.

Tents have been erected in Sanaa’s Tahrir Square, which bears the same name of the square in Cairo that was the base of the anti-government movement that eventually forced the resignation of Egypt’s longtime ruler Hosni Mubarak.

The tents were occupied by pro-government supporters primarily from Khowlan, a village outside of Sanaa that is loyal to Saleh. Thousands of tribesmen from Khowlan have been bused in throughout the week to occupy the central square, anticipating any anti-government protests.

Two demonstrators were killed by security forces on Wednesday during demonstrations in the southern city of Aden. More demonstrations are planned to take place near Sanaa University in the coming days.