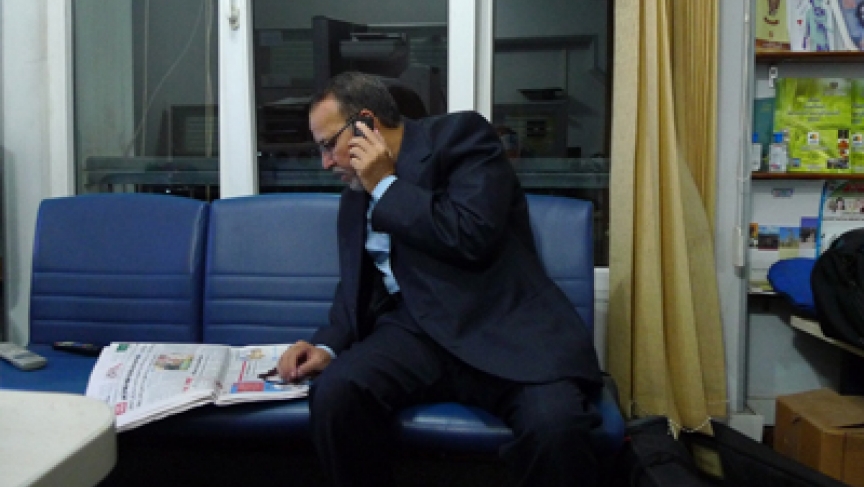 Share
By Ben Gilbert The night before the massive protests began in Egypt, Muslim Brotherhood spokesman and executive committee member Mohammmad Al Morsi was detained in the middle of the night by Egypt's police. He and 34 other Muslim Brotherhood leaders were taken to a prison in the desert. It wasn't the first time leaders of the banned group had been thrown in jail. A day later, as Egypt fell into chaos, the prison was attacked. The guards fled. The building was on fire. And as prisoners escaped, some pried open the doors to Al Morsi's cell. "They somehow attacked the door, opened it, and gave us a telephone," Al Morsi said. Al Jazeera was on the line. And a few days later, the brotherhood had a representative at the table, meeting with Egyptian President Hosni Mubarak's right hand man, Omar Suleiman. It was the first time a regime official had met with the brotherhood, ever. The group has often played it cautious. It was late in coming to the protests, for example. But Brotherhood members were eventually a powerful force in calling for Mubarak to step down. Brotherhood goals Al Morsi is a US trained engineer who spent seven years in Los Angeles. When asked what he wants for Egypt, he Al hammered home these points: "Freedom. Democracy. Equal rights. Social work. Development. Human rights. For everyone, not just for Muslim Brotherhood, for all the Egyptians," Al Morsi said. But the group also calls for the implementation of Sharia, or Islamic law, in Egypt. The group's 2007 political platform is staunchly conservative. It says a president cannot be a woman or a Christian. And when asked about some of the more extreme aspects of Sharia law, like banning alcohol, stoning adulterers or cutting off the hands of thieves, Al Morsi is ambiguous. "Personal behavior in a closed place no one can knock his door and say what are you doing," Al Morsi said. "This is forbidden. If it becomes threat to society then law will interfere." But even that isn't a universal belief these days in the Brotherhood. The movement encompasses a great number of political views, some liberal, some conservative. Much of the difference is generational. A new generation Islam Al Lutfi is an international human rights lawyer and young member of the Muslim Brotherhood. He doesn't think Egypt should be governed by Sharia law, and said many members of his generation are more progressive than the "old guard." "The new generation of Muslim brothers have tools that were not available to the previous generation," Lutfi said. "They have internet, new media like Facebook and Twitter, and blah blah. And this makes them more connected with the world. They exchange ideas, they exchange dreams, so I think they are different." Others pointed to the brotherhood's time in parliament as a guide to how they would behave as a political party. Its members, running as independents since the group was banned, often supported democratic reforms. When to hold elections But some secular politicians and activists worry new elections could hand the Muslim Brotherhood a lopsided number of seats. "If you have free elections right now, the Muslim brothers could win more than 40 or 50 percent because the regime destroyed any other political power; liberal and the secular," said Imad Ghad, political scientist at Cairo's Al Ahram Center for Political Studies. "The only power who was allowed to be in Egypt is the Muslim Brothers. (That was) in order to send message to the west and the Copts you have to choose between me and the Muslim brothers." The Muslim Brothers themselves, don't think the group would win much more than 30 percent, whether elections were held in six months or a year. Even so, Ghad said it would be better to hold elections a year from now, so secular liberal parties can build organizations. That way, he said, other parties would have time to build themselves up. Many Egyptians don't seem very concerned about the numbers one way or another. Sahar Mustafa, a 22 year old engineer, was walking along the Nile earlier this week. Sporting a veil in the colors of the Egyptian flag, she said she wouldn't support a government that pledged to impose Sharia law. "I want to see a democratic government that listens. Where there's freedom of expression, and dialogue with the people," Mustafa said. At the moment, Egyptians seem to think that they need more freedom, and fewer rigid rules, in their new government.