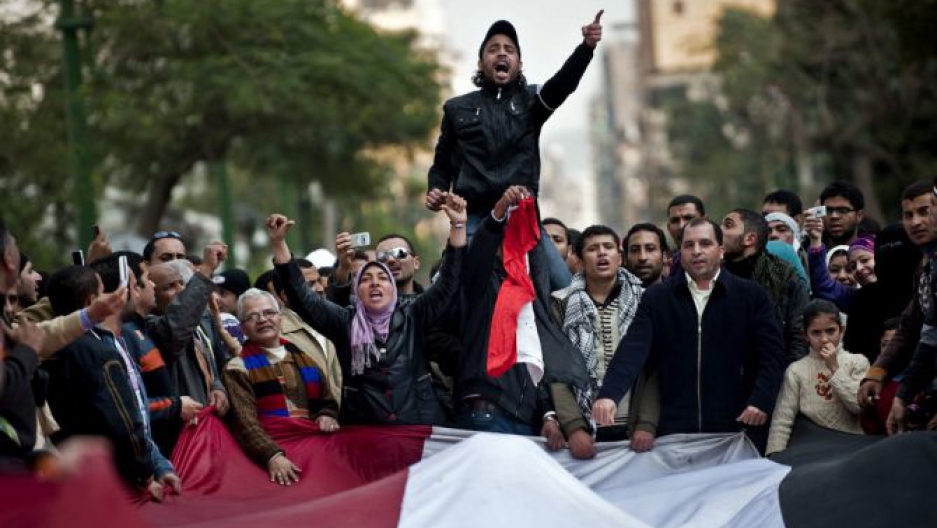 When the news of Egyptian President Hosni Mubarak’s resignation reached Faris’ tent in Tahrir Square on Friday, the 30-year-old blogger, along with tens of thousands around him, erupted in jubilation.

Faris was one of several youth activists behind what was planned to be a small demonstration in Egypt’s capital on Jan. 25.

But the result — tens of thousands of protesters spontaneously taking to the streets of Cairo — defied all expectations.

“None of this could have happened even in our wildest dreams,” said Faris. “Our maximum objective was to move with 5,000 people around Cairo. We never even thought we would reach Tahrir.”

Very few people in the Middle East could have imagined that Mubarak's regime — which reigned supreme for 30 years — would be toppled in a mere 18 days, following massive protests and strikes across the Arab world’s most populous nation.

After all, Mubarak’s Egypt was the model of stability in the Middle East. Small-scale street protests had become increasingly common in recent years, but these were easily quelled by the country’s all-powerful internal security forces.

Egypt’s recent uprising, inspired by similar unrest in neighboring Tunisia in January, arose seemingly without external causes or premeditation by any one group, while at the same time attracting a broad range of Egyptians that transcended political, social and cultural divisions.

But the initial days of the demonstrations, in Cairo at least, were meticulously mapped out — at least one month in advance — by a group of young Egyptian activists long determined to bring about political change.

Interviews with two members of the so-called Revolutionary Youth Council — a group of 14 tech-savvy Egyptians selected to represent thousands of young protesters in Tahrir Square — shed some light on the ways that social media, secrecy and strategic maneuvering were deployed to counter Egypt’s vast security apparatus and eventually topple one of the most entrenched autocracies in the Middle East.

“We didn’t plan the demonstrations that happened in Tahrir [starting in January]. We were just a catalyst in the chemical equation,” said Amr Salah, a 25-year-old human rights activists with a university degree in chemistry.

Salah and Faris met each other at a small protest a few years ago.

Both champions for human rights, Faris drew inspiration from Voltaire's Enlightenment writings, and Salah from documentary films on the 1989 democratic revolutions in Eastern Europe.

“I dreamt that we could do the same thing in Egypt,” said Salah.

In 2008, they both found a potential vehicle for change in the Sixth of April Youth movement, a group of activists who used Facebook to encourage solidarity with striking textile workers in the northern Delta town of Mahalla. Low workers’ wages, along with rising food prices, sparked the largest demonstrations in Egypt since bread riots in the late 1970s.

Egyptian security forces eventually crushed this protest — but not before they took note of several of the young activists.

Salah said security followed him closely and called him often after 2008. In 2010, Salah disappeared when he was arbitrarily detained for 30 hours — security gave no notification to his terrified family.

Faris has been arrested at least once per year since 2005, most likely, he says, because his family belongs to the banned Muslim Brotherhood movement.

Largely due to the fear of similar arrests, Egyptian youth activism remained out of the mainstream until the summer of 2010, when a young Alexandrian named Khaled Said was found dead, allegedly tortured and killed by the police in Egypt’s second largest city.

An anonymous Facebook group — run by an Egyptian Google executive named Wael Ghonim — was launched to disseminate news about Said, which re-inspired young political activism in the country. The page received hundreds of thousands of fans within months.

“Before, when we called for something on Facebook, we didn’t get a lot of feedback. But after Khaled Said, people really started responding to calls for solidarity,” said Faris. “That page was able to easily gather people in groups online, because it was harder and harder to do it on the street.”

In late 2010, members of the Revolutionary Youth Council began to plan a solidarity protest for Khaled Said for early 2011.

Members of the Revolutionary Youth Council deliberately chose Egypt’s national Police Day — Jan. 25 — to publicly disdain rather than commemorate a security force marked by a long history of brutality and human rights abuses.

But none of them envisioned that their plans would eventually spark the largest popular uprising in Egypt's modern history.

The group used a combination of coordinated tactics — including the use of Facebook and Twitter — to deceive state security forces regarding their intentions.

Strategy sessions were always conducted in different locations and, as an extra precaution, an “intelligence unit” conducted reconnaissance of the specified meeting places an hour in advance to ensure police were not lying in wait for them, said Faris. Mobile phones, which members believed to be under surveillance, were turned off during meetings.

“We also took the batteries out, because the police have the ability to listen in even when phones are off,” said Salah.

Members of the group agreed not to sleep at their own houses one week before the Jan. 25 protest.

When that day came, thousands of heavily armed Egyptian security forces were waiting, having fortified their positions at several key locations throughout Cairo. The government fell back on familiar tactics: enclose activists and force them to tire behind a thick cordon of baton-wielding riot troops, utilize violence at will, and detain protesters en masse to slow their momentum and instill fear.

Egyptian youth activists, however, attuned to security tactics following years of smaller-scale street protests, devised a “cat and mouse” strategy to conceal their launching points and surprise the police.

Facebook groups, widely believed to have been under surveillance by security, were used as a diversion or decoy, not as the primary means of organization.

“We knew the police were following us so we lied online,” said Faris.

Activists organized the marches on Jan. 25 by going back to the original social network: face-to-face communication. A return to basics was crucial after the government cut off all means of communication — including mobile phone networks and the internet — after the first three days of the protests.

The true locations of meeting points were only discussed in person, and these could be changed quickly at any sign of danger, since group members could reach more than 300 of their fellow activists in fewer than five minutes via an informal telephone network.

As a result, the police were caught off guard, spreading out in massive numbers in precisely the wrong locations around Cairo.

“We forced the police to distribute their forces. They never knew where we were. We could mobilize our people before security found out,” said Salah.

Twitter and Facebook were used to direct larger crowds, but only once protesters were actually set in place, marching on the streets.

Organizers may have played a role in bringing record numbers of Egyptians to the streets by highlighting the connection between politics and living conditions.

Salah chose the working-class suburb of Imbaba as the site of a protest on Jan. 28 to appeal to poorer Egyptians, many of whom lived close to the poverty line as food prices were soaring.

“We needed to make the connection between liberty and bread to attract broader support,” said Salah, who called up to onlookers watching from balconies to join the march on the 28th.

Late on Friday Jan. 28, with swelling crowds advancing in the tens of thousands, Egyptian security forces fell back — eventually disbanding after the armed forces were called in to defend the capital. That night, the crowd set up a beachhead in Tahrir Square. Over the next two weeks, hundreds of thousands of anti-government protesters successfully held that ground, chanting in unison for Mubarak to leave.

When Mubarak departed on Feb. 11, Egyptians exploded into days of celebration with vuvuzela horns, drums and fireworks on the streets of Cairo.

For the young activists who drove Egypt's revolution, social media was important, but not everything. "We were active on the street well before they were using the internet," said Faris.

Salah hopes that their tactical use on the internet will be replicated in neighboring countries whose people live under similar authoritarian regimes.

The shockwaves of Mubarak’s ouster resonated around the Middle East, with solidarity protests springing up almost instantly on the streets of Algeria and Yemen.

“I can’t even describe in words how it feels to have won,” said Salah. “I’m waiting for someone to wake me up from the dream.”