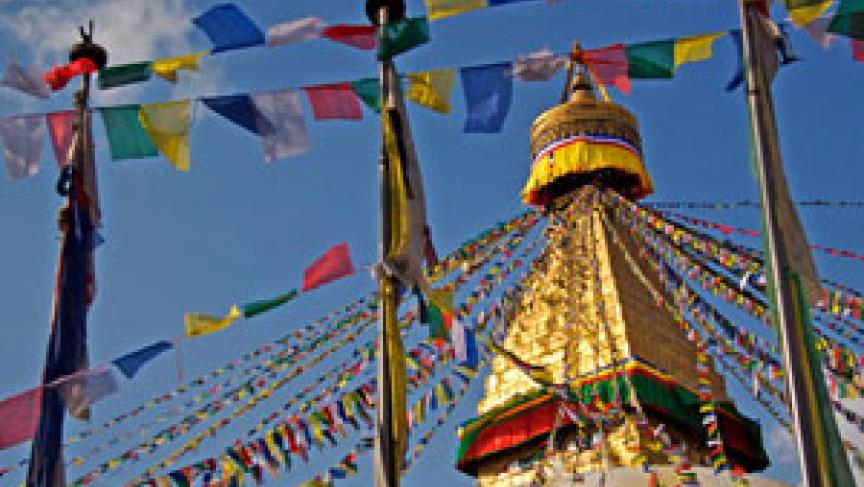 Sunil Pant walked through the narrow allies of a popular tourist area in the Nepalese capital, Kathmandu.

He stopped at a café overlooking a busy street. "It's very trendy," he said. "A lot of young people like to come here. It's frequented by a lot of gay people."

Pant is the first openly gay member of Nepal's parliament. He recently launched a campaign aimed at turning Nepal into a gay tourist destination.

He admits, though, that it may take some convincing. "A lot of gay and lesbians visitors who have never visited Nepal may think that Nepal is a very conservative country," he said. "They may worry that the country won't welcome them or will discriminate against them because of their sexual orientation."

It's not just Pant who wants to attract gay tourists.

Kishore Thapa, Nepal's secretary of tourism and civil aviation said that a Maoist insurgency and ensuing political turmoil almost killed Nepal's tourism industry, and it gave outsiders a very bad image of Nepal — "that Nepal is unsafe, insecure, and nobody should visit Nepal," Thapa said. "So to change that, we decided to observe 2011 as the Visit Nepal tourism year."

Nepal has been running ads for Nepal Tourism 2011, the government hopes to attract one million visitors this year, double what it says visited last year.

"I know that this type of tourist spends a lot," Thapa said, "We want tourists in this country who will spend a lot. We are very open a liberal in this issue."

But that openness is fairly recent. Up until 2007, homosexuality was illegal in Nepal. Sunil Pant took the issue to the Supreme Court, and he won the case.

Nepal has not only decriminalized gay sex, it's considering legalizing same-sex marriage.

Still, Tourism Secretary Thapa conceded that not everyone here is ready to welcome an influx of gay tourists. "We have to make some kind of a balance between our culture and tourism," he said. "We don't want our society to react negatively to this type of tourist because the security of tourists is our prime concern."

On the streets of Kathmandu, Dipendra Ghimire, who works at a hotel, said he doesn't like the idea of gay tourists. "It would be bothersome," he said. "Our culture doesn't allow it. I am sure that slowly, that will change, but right now, it is not comfortable."

But another man, Jay Kishan Rajpur, who sells souvenirs, sees the economic potential.

"If they come, employment will increase. They will come here, and if there is peace, they will like it," Rajpur said. "When they return to their country, they will tell others about how nice of a country Nepal is. Then more tourists will come."

Sunil Pant is counting on that. He's started a travel agency called pink mountain that offers gay wedding and honeymoon packages in Nepal.

He thinks people in Nepal will come around.

"I think once they see how the economy gets better," he said, "even the few who may have concerns will be supportive."

And if nothing else, Pant hopes the lure of more money will help Nepal usher in a more tolerant society.