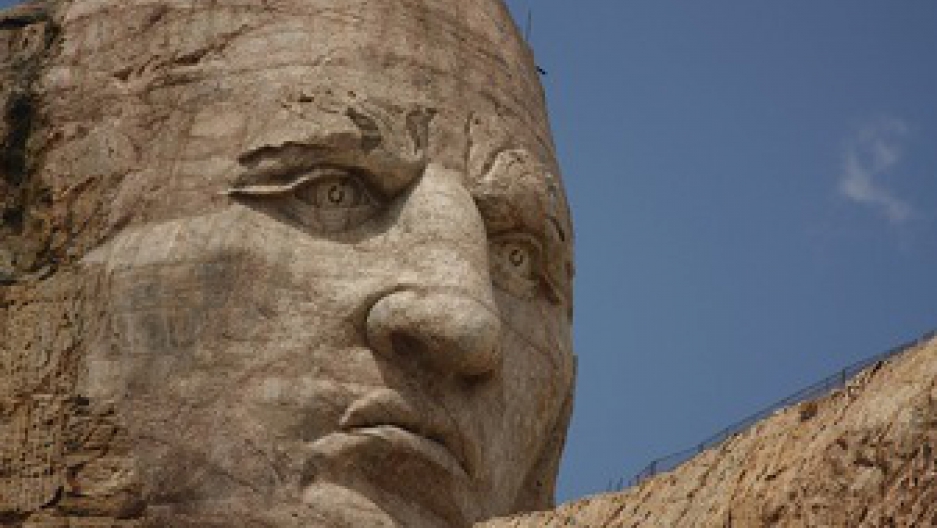 Photograph of the Crazy Horse Monument (image by Great Beyond (cc:by))

"It was as if no one had bothered to write an account of the killing of John F. Kennedy," writer Thomas Powers recalls about researching for his book, "The Killing of Crazy Horse." His telling of the Oglala Lakota Chief's story demonstrates the United States of America's ethnocentric approach to other nations.

Crazy Horse is best known for the strategic gifts he demonstrated at the Battle of Little Big Horn in 1876, when his army fought General Custer. The General was a Civil War hero, and his death made Crazy Horse infamous. Powers explains the impact of Custer's death: "the whole country was shocked in the same way that we were shocked at Pearl Harbor."

One year after Custer's death, as Crazy Horse surrendered, he was stabbed with a bayonet and killed. Powers describes what happened in the chaotic moments of the Chief's surrender:

"The authorities were ready to murder him but did not, in fact, at the last minute actually murder him. But they killed him while trying to place him under arrest and they had lied about everything they had intended to do. And it was those lies, that finally, when they became apparent in just the last minute bought Crazy Horse to the point of resisting."

What happened in those moments and, more broadly in the Indian-American War, has been echoed in recent wars, according to Powers. "The biggest parallel is the American attitude -- 'We can do this. We know how to do this. These are ignorant backward peoples. We can defeat them,'" Power says. "In Vietnam, of course, that was completely false. We were the people who were arriving in small numbers and destined to go away again, but in the great west, that wasn't the case. We came to stay."

For Powers, this story had to be told, "There's something to be said to just simply looking at it straight on and admitting what happened and feeling the sorrow of it."