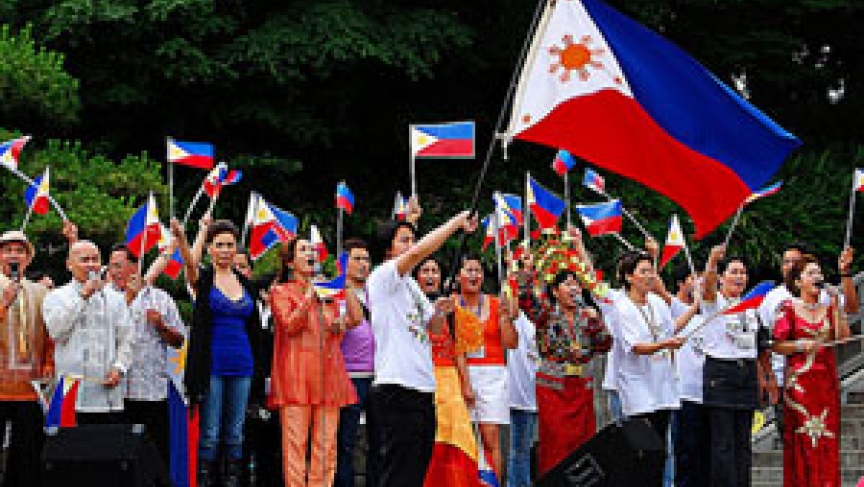 The hallways of the office in Manila that deals with overseas workers are generally packed. About five dozen men cluster in small groups, affidavit forms in hand. They're submitting official complaints against their former employer, a metal fabricator in Dubai, which they say stopped paying them as it was going under.

Armel Adolfo, 33, was a machine operator on his third stint abroad. He says he's embarrassed that the shelves in his home are pretty bare. And he wonders how he can manage.

Adolfo says he can make twice as much money each month working overseas, but the potential financial reward comes with a risk. He explains that Filipinos heading overseas to work generally get into debt before they even leave home because recruiters charge a fee. The typical amount is a month's salary and many people often have to take out loans to pay the fee and still have money left over for their daily expenses.

Then there's the fact that companies often charge workers for the cost of bringing them over. Sometimes, employers will take up to half a month's pay. But the problem overseas isn't just monetary. There are many cases of physical abuse as well.

The Philippine government has banned its citizens from working in Lebanon because there were so many reported cases of abuse there. President Benigno Aquino ramped up efforts to repatriate distressed workers when he took office in July.

Nicon Fameronag, spokesman for the Department of Labor and Employment, says "the policy of the administration is that the Filipino workers who are going out should be looking to the day when working abroad is just an option to them. For that to happen we should attend to our economy first."

So the labor department is taking the first steps in the president's 22-point plan to bring better-paying jobs to the country. The government strategy starts with the Filipinos returning from overseas and in many cases, they return with cash in hand. Fameronag calls these people OFWs -- overseas Filipino workers. He says they're teaching OFWs how to invest their money, how to do accounting, and how to use their skills. The administration is hoping this will lead to jobs that pay just as well as overseas work.

About 4 million people, or close to 5 percent of the population, work abroad. Around 40 percent of them are skilled laborers and another 40 percent are service workers, including household help. The rest are professionals and administrators. More than two-thirds of them work in the Middle East.

According to the World Bank, remittances from Filipinos working overseas make up more than 10 percent of the country's GDP. Economists believe economic growth would be impossible without remittances. Fameronag says the government knows it can't prevent people from leaving to find better work, but it can prevent exploitation.

"What we're saying is that while you're there you're well-protected, but if you want to go home, please go home, because we will be looking for a job for you."

But until the local job market gets up to speed, Armel Adolfo and others like him will look for the next job opportunity overseas, just as soon as they can come up with the money to leave and regardless of the perils they might face.