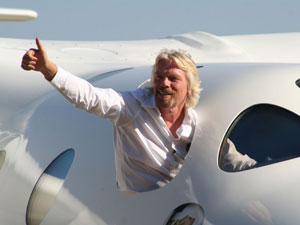 This article was originally reported by PRI's The World. For more, listen to the audio above.

Sir Richard Branson made billions on business ventures like Virgin Atlantic Airlines. Now he's trying to use some of his wealth, notoriety and business acumen to help Zimbabwe.

Under its current leader, Robert Mugabe, Zimbabwe has seen staggering inflation, civil strife, violence and mass exodus of people to neighboring South Africa. Branson's new nonprofit, Enterprise Zimbabwe, aims to connect philanthropists and commercial investors with business and social development opportunities. The idea is to use foreign investment to help the country.

"We can't afford to sit on the sidelines," Branson told PRI's The World. "We've got to get in there to help Zimbabwe back on its feet." When asked if he'd been to Zimbabwe before, Branson said that he had. "I've even jumped off of Victoria Falls."

Opposition leader Morgan Tsvangirai -- who only recently agreed to a power sharing deal with President Robert Mugabe, which ended open conflict -- has embraced Enterprise Zimbabwe, according to Branson. He says, "We have their full blessing."

Representatives of President Mugabe, on the other hand, have not been as easy to convince. One representative said the ruling party would not tolerate "backdoor entry by vultures disguised as angels."

"We're there to help," Branson responded. "We're not making any money out of it. We're doing it on a completely charitable basis." Branson insists that he and his organization are there to help the people of Zimbabwe, adding: "I would have expected that Robert Mugabe's people would be there to look after their people as well."