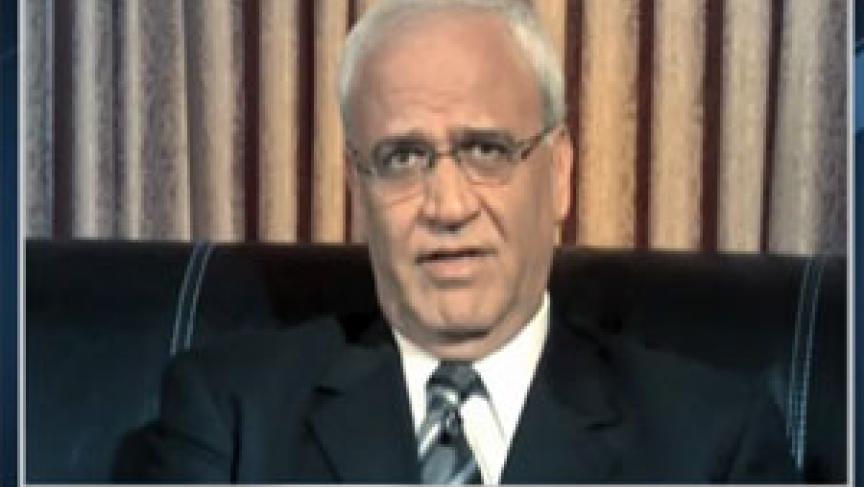 Story by Daniel Estrin, "The World."

A new series of ads look like Facebook friend requests, but they're from Palestinian peace negotiators. Saeb Erekat, the Palestinian chief negotiator, appears in one that reads, "Saeb Erekat wants to be your partner." Users can click "confirm" or "ignore." If a person clicks, "ignore," they're met with the message, "Even if you ignore them, they won't disappear." People can also watch the videos (below), where Erekat says:

The $250,000 ad campaign is bankrolled by the United States Agency for International Development, and was produced by the Geneva Initiative, a joint Israeli-Palestinian project that has drafted its own peace proposal. The creative director of the advertising campaign, Ron Assouline, has filmed hundreds of Israeli TV commercials for banks, cars and the lottery, not to mention political campaign commercials.

"We wanted to make you listen, we wanted you to feel, that there is someone on other side, who is your partner and who is good enough to be your partner," Assouline told PRI's The World. "You can trust him. Look in his eyes, listen to his body language, listen to his words."

Every aspect of these commercials was meticulously tailored to the Israeli audience, starting with the soft guitar music. "Piano, for instance, would be more heavy, more European, more serious," Assouline says. The commercials have no Palestinian flag in the background, because Assouline believed flags could distract Israeli audiences.

Assouline filmed Palestinain negotiators, instructing each to begin their messages with the word "Shalom," Hebrew for both "hello" and "peace." He says audiences automatically open up, like when Madonna says a few words in Hebrew on stage and Israeli fans go wild.

Ad campaigns about Israeli-Palestinian negotiations are not new in the Israeli media landscape. But this is the first campaign that has Palestinians addressing Israelis directly. Tamir Shefer, a professor of political communication at Hebrew University in Jerusalem, says even so, it probably won't work.

"It's very, very difficult to move public opinion now. People are cynical, people have problems to believe that this time it will be different than in the past," Shefer told The World. "And they have hoped and lost hope, and hoped and lost hope, in the last decade or so."

Part of the problem is that some Israelis don't believe the message. An Israeli website posted a clip of Palestinian negotiator Jibril Rajoub, who participated in the ad campaign, speaking quite differently on Palestinian TV a few months ago. He said:

Building a school and throwing a grenade, in my opinion, are forms of resistance. When there is a need to throw a grenade, or a rocket, I'll do that as well, because of my belief.

And Saeb Erekat, the chief Palestinian negotiator, accused the campaign of using his words to suggest he was apologizing to Israelis for past failures.

Ghassan Khatib, a spokesman for the Palestinian prime minister, says rather than bring people together, the ad campaign managed to tick people off. He says, "The Israeli public felt that this is sort of artificial and the Palestinians felt betrayed because it started by some kind of apology that backfired in the Palestinian side."

Creative director Ron Assouline, however, remains peppy. He says he's meeting with the Geneva Initiative this week to talk about furthering the campaign. He'd like to create similar advertisements in the West Bank. He told The World:

I would do it in a different way. I would the man on the street from Israel and put him on the Palestinian street. And not the leadership. I would use real people. I would help them see us the way we want to see them.