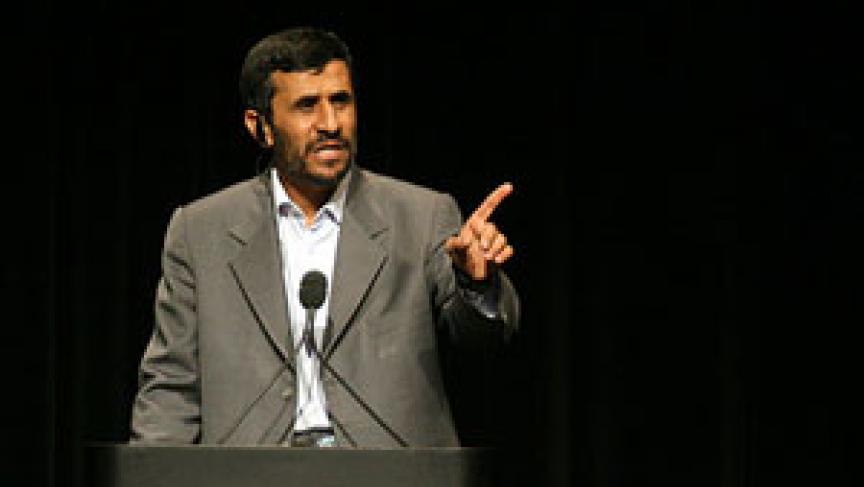 This story was originally covered by PRI's The World. For more, listen to the audio.

During an event for Iranian expats living in the United States, President Mahmoud Ahmadinejad uttered the Persian expression, "mameh ro looloo bord," literally meaning "the boogeyman snatched the boob." Iranian mothers use the expression when weaning their infants off breast milk. More publicly, Iranians say it to each other when they've missed out on something, like if they've lost out on a business deal, or missed out on an opportunity. It means, generally, too bad. Move on.

"It's a very, very vulgar and cheap expression," Iranian journalist and blogger Farhad Salmanian told PRI's The World. In this case, the president was trying to strike a defiant tone toward the United States. "This language is undiplomatic," Salmanian said, "Ahmadinejad is the president of a country. He shouldn't use this language as a political man, as a man who wants to represent the country. It's shameful."

Though crude, the expression may have been used as a kind of linguistic populism, Cyrus Farivar reports for The World. He may have been playing to Ahmadinejad's religious and conservative base in the rural areas of the country, in the same way that U.S. politicians like George Bush may have used "folksy" language to appeal to voters. Ahmadinejad, once the mayor of Tehran, may be trying to show he is a man of the people.

"It doesn't necessarily mean that this is their culture," journalist and writer Faraj Sarkouhi told Radio Free Europe, "but in fact they use vulgar language to create a bridge and appeal to the masses. It's a kind of demagogy."

In other situations, Ahmadinejad has used language that has been much more diplomatic. When one of his advisors recently came under fire, the president responded, "Mashai has my full support." Abbas Milani, a professor of Iranian Studies at Stanford University, told The World, "That's not how any other president in my memory in Iran says I still am behind somebody. That's almost a translation from what the White House usually says about a beleaguered politician."

Ahmadinejad may be following in the footsteps of his predecessor, Ayatollah Khomeini, the founder of the Islamic Republic. Khomeini coined the phrase "The Great Satan" when referring to the United States, but he could also switch his language, depending on whom he was speaking to. Milani described Khomeini's language to The World:

You can watch a video of Ahmadinejad's controversial comments below: