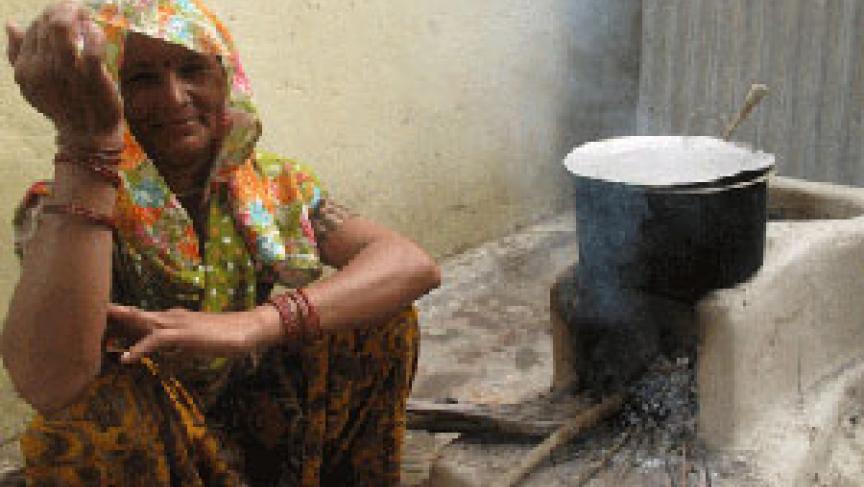 At evening rush hour, the streets of New Delhi, India's capital city, are choked with buses, cars, and motorcycles, and air so hazy it can be difficult to see.

The pollution here and across South Asia can be severe. And not only does it make millions of people sick, it also adds to a growing global problem — climate change.

That’s because it contains a kind of soot that researchers call black carbon which is a powerful absorber of sunlight — several hundred times more potent than the main greenhouse gas, carbon dioxide.

Until recently, most studies had suggested that the black carbon in India’s air came largely from diesel vehicles and coal power plants.

But a researcher at Stockholm University in Sweden recently made a surprising discovery.

Geochemist Orjan Gustafson used air filters to collect soot from India, and employed a technique called radiocarbon analysis to determine its sources—how much of it came from fossil fuels cars, motorbikes, and power plants, versus how much came from burning wood and other organic matter.

Turns out, he says, that “two-thirds comes from biomass/biofuel combustion.”

Now that two-thirds itself comes from different sources, but Gustafson thinks that the vast majority comes from one source—cook stoves.

Cookstoves are ubiquitous across India, especially in villages like Walia Waas outside New Delhi.

You can smell the smoke in the mornings, and see thin wisps of it rising from the houses as families cook meals of vegetables and wheat breads on traditional stoves.

In one of them, young mother named Nitu takes a ball of dough, pats it back and forth between her palms till its round and flat and ready to be placed on the stove.

She says she spends several hours every morning and evening at the stove, called a chulha.

It’s a hollow cylinder made of mud, open at the top and on one side, that burns twigs and cakes of dried buffalo-dung.

It creates a lot of smoke, but Nitu says that doesn't bother her.

All she cares about, she says, is that her family family likes and eats what she cooks.

Nitu’s attitude toward her chulha is extremely common here. Multiply it by the cookstoves in virtually every one of India’s 150 million rural households, and you get an idea of the scale of the problem and the challenge of addressing it.

And yet, says University of California San Diego atmospheric scientist V Ramanathan, replacing those cook stoves with newer models that reduce or even eliminate emissions, would have a dramatic impact on the black carbon pollution in India.

And replacing dirty cook stoves all over Asia, South America and Africa could have a similar effect on black carbon levels worldwide.

Ramanathan says that could help reduce the rate of global warming in the short term while the world grapples with the bigger problem of cutting carbon dioxide emissions.

“We've lost some time in taking remedial action to slow down climate change,” Ramanathan says. “So while we're figuring out how to reduce CO2, reducing black carbon… would let us gain some time back.”

The idea has become popular among many in the global environmental community.

Scientists, entrepreneurs, and environmental groups have rushed in to help replace dirty cook-stoves in the developing world.

Ramanthan himself launched a pilot project in a village in northern India last year, testing a new model of stove that pollutes less than traditional ones.

But as with Nitu, it can be a tough sell.

“Cooking is a very cultural trait,” says  Ibrahim Rehman, a scientist at New Delhi’s Energy and Resources Institute and a collaborator on Ramanathan’s project.

Rehman has spent most of his career trying to get rural Indians to adopt cleaner cook-stoves, not for environmental reasons, but to protect the health of women and children from indoor smoke.

He says people are particular about cooking their food in a certain way, and that when others before him tried to get villagers to switch to solar cook-stoves, it didn’t fly.

So the stoves he’s testing now are similar to the traditional ones — they burn dung and plant material, only more efficiently.

But it remains to be seen whether they will be widely adopted.

And even when new cooking technologies are accepted, they may not be used much. Nitu’s family, for instance, does own a modern, soot-free gas stove, but the family rarely uses it.

Niitu’s mother-in-law says they use it occasionally, for example, to cook for unexpected visitors.

But for daily meals she prefers the chulha.

It may put out smoke, but it makes the food taste the way it’s supposed to.