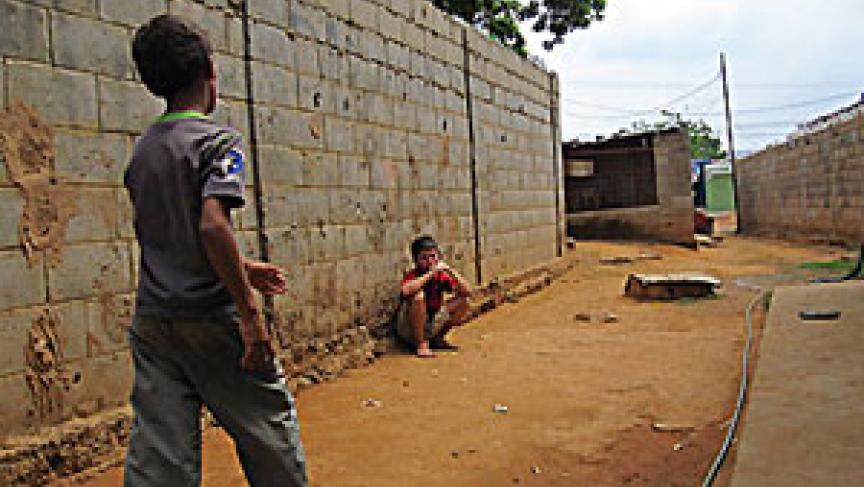 Thirty years ago, international medical researchers descended on the shores of Lake Maracaibo in Venezuela to perform a landmark study on Huntington's disease. They took biological samples from the town's residents including blood and semen. Using that research, scientists were able to pinpoint the gene that causes Huntington's disease and develop a test for it. That test, and any benefit from the research, is still unavailable for the residents of Maracaibo.

Huntington's disease is a hereditary brain disorder that causes muscles to jerk and spasm uncontrollably. It usually sets in around age 30 or 40, and there is no cure. Researchers chose Maracaibo—a poor and remote fishing village -- because it has the world's largest concentration of people with Huntington's disease.

A test for the disease is now widely available in the United States, Europe and even as close as Caracas. But it can cost more than $1,000, far too much for most Maracaibo residents, who rarely know that a test exists. One woman named Mariella asked PRI's The World, "Test? Test for what?"

"In the US or in Europe, whomever has the disease in their family has the option to decide, 'I want to get the test,' or 'I don't want to know.' They don't even have that option, even after they collaborated in the research," Ernersto Solis, a doctor and geneticist in Maracaibo, told The World. Solis criticizes the Venezuelan health care system for not providing the test, but believes that in their absence, the medical researchers should provide it.

In fact, international ethics regulations place a responsibility on the researchers to provide the test to the residents of Maracaibo, according to Ruth Macklin, a professor of bioethics at Albert Einstein College of Medicine in the New York.

The lead researcher on the study, Nancy Wexler, doesn't believe the test could help Maracaibo. She's focused on finding a cure, not just a test. In fact, Wexler believes that the test could cause harm to Maracaibo residents, especially for people who are diagnosed with the disease, and have no hope of a cure. There's even a chance that some of them could commit suicide.

Until there is a cure, Wexler points out that she has raised some $6 million to establish a Huntington's Disease clinic for the people in Maracaibo. "We provide very expensive medicines for psychiatric problems, a lot of people have hallucinations, delusions, violent outbursts, antidepressants," says Wexler. But the test is not available.

That's not enough, according to Ruth Macklin. "It is unacceptably paternalistic for researchers to claim this is bad news we should not visit on people," Macklin told "The World. "That is really a form of intellectual colonialism that we know what's better for those people, and it's better for them not to have a test."

To discuss the issue of genetic testing, geneticist and genetic counselor Mayana Zatz is taking questions in the World Science Forum all this week.