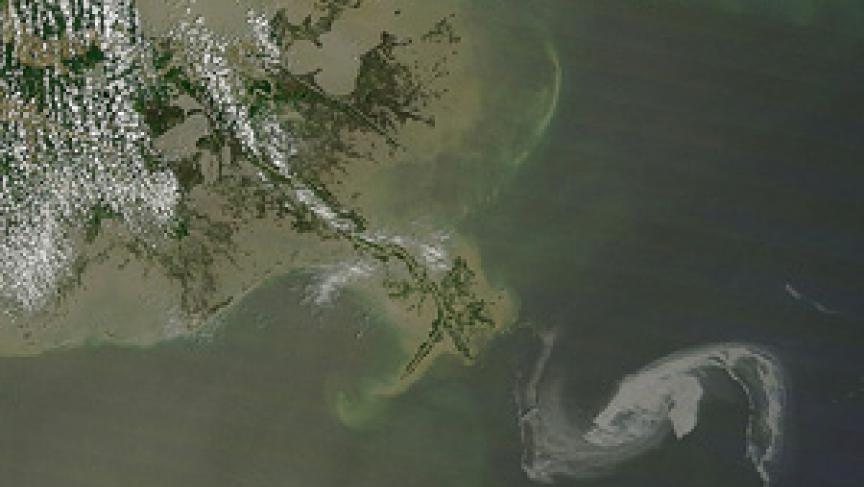 Oil from the massive spill in the Gulf of Mexico has started to wash up on the shores of Louisiana. Up to 5,000 barrels of oil a day are thought to be spilling into the water. Emergency crews are scrambling to contain the effects of the spill, which some fear could become one of the worse environmental disasters in US history.

The Obama administration has banned oil drilling in new areas off the U.S. coast while the cause of the oil spill off Louisiana is investigated.

"No additional drilling has been authorised and none will until we find out what happened," White House adviser David Axelrod told ABC television."

Speaking later at the White House, President Obama said he was launching an immediate review of drilling activities in the Gulf.

"I've ordered Secretary Salazar to conduct a thorough review of this incident, and report back to me in 30 days on what, if any, additional precautions and technologies should be required to prevent accidents like this from happening again. And we're going to make sure that any leases going forward have those safeguards."

Last month President Barack Obama eased a moratorium on new offshore drilling. His decision was largely a political one, the administration needed to strike a compromise if it hoped to gain bipartisan support for an energy bill to address climate change.

"If you were designing what could be the worse possible timing for something like this, it's now," said Christine Todd Whitman. "I mean, it's a disaster no matter when it happened, but from the president's point of view, it couldn't have happened at a worse time."

Whitman served as head of the Environmental Protection Agency during President George W. Bush's first term, and now heads a consulting firm specializing in energy and environmental concerns. She says the disaster unfolding in the Gulf is going to make it much harder now to get an agreement on energy, and the rest of the world is watching to see how the U.S. responds, especially as the magnitude of the spill grows.

A lot of countries, most importantly China, are looking to the U.S. to take the lead on cutting greenhouse gasses. So if talks break down in Congress, it could make it much harder to get international agreement on climate policy.

Sam Thernstrom of the American Enterprise Institute hopes at the very least, the oil spill in the Gulf will lead to even better drilling practices in the future. "Typically we do have much great scrutiny of the industry and much greater care involved in this type of activity."