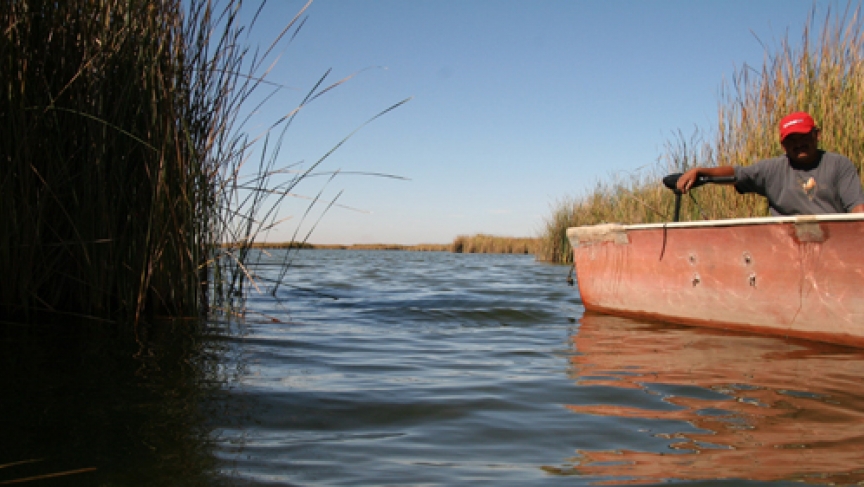 The Cienega de Santa Clara wetland, in Sonora province in northwestern Mexico, is fed by runoff from U.S. farms irrigated with water from the Colorado River.

A plan by the U.S. to reuse polluted Colorado River water that now flows across the Border into Mexico is putting one of the region's last wildlife refuges, and a number of Mexican farms, at risk.

In the Cienega de Santa Clara in dry northwestern Mexico, columns of moist air hover above still water mirroring the desert sky. The wetland, an oasis for birds and fish, some endangered, is what Arizona biologist Francisco Zamora Arroyocalls “the most important wetland in the Colorado River delta.”

Zamora spends his workdays navigating the Cienega’s sliver thin channels that snake through islands of yellow cattails, monitoring the status of water and wildlife across the wetland’s 63 square miles.

“It’s a perfect habitat for many species of birds and it’s located on a migratory corridor,” he says, “so it’s even more important that way.”

But the Cienega is also an accidental oasis. It was created 33 years ago by the diversion of polluted agricultural runoff from farms across the border in the U.S. Now, with water growing ever more scarce in this part of the world, the U.S. wants to keep that runoff, recycle it and put it to back work inside the country.

That’s put the Cienega’s future in question, and made it a symbol of the growing water conflicts in the border region.

Allocation of water from the Colorado River and Rio Grande is regulated under a 1944 U.S.-Mexico treaty. The two countries have agreed to renegotiate parts of that pact, and under a trial run this year, the flow of wastewater from Arizona’s farms into the Cienega will stop, and go instead to a desalting in plant in Yuma, Arizona.

That would free up 100,000 acre-feet for use by cities and farms in the U.S., according to University of Arizona geoscientist Karl Flessa.

The Yuma plant will remove the salts that have leached into the water from local farmland and funnel the water back to the growing cities of Phoenix, Las Vegas and San Diego.

And Flessa says that could happen while still meeting U.S. treaty obligations to Mexico.

That’s because the U.S. says it will replace the water that now flows to the Cienega. But it hasn’t said how.

That worries people concerned about the Cienega. It also worries Mexican farmers.

Juan Butron Mendez irrigates seven acres of wheat with the last traces of Colorado water as the river dries up in Mexico. He’s not happy with its quality, but he says it’s better than no water at all.

Butron is also a naturalist working to save the wetland. He says the plan to keep that water is the latest example of the U.S. giving Mexico short shrift on Colorado water.

The US counters that Mexico violates its water treaty obligations as well.

Butron says it’s time for the countries to cooperate, as the treaty mandates.

He says competing needs can be met by leaving fields fallow on a rotating basis on both sides of the border. He also wants the U.S. to use its own groundwater to bolster urban supplies instead of reclaiming the wastewater that now goes to the Cienega.

But that groundwater is already spoken for as well, used to irrigate vast fields across the American Southwest. And U.S. farmers have been assured that their water supply won’t change under a new treaty.

Those major questions, of which side will give what, remain unresolved. So for now, supporters of the Cienega de Santa Clara are pinning their hopes on smaller, local efforts to save water.

Like his friend Zamora, biologist Osvel Hinojosa spends a lot of time on the Cienega. He’s a member of the Mexican delegation negotiating with the U.S., and he says there are people on both sides of the border “wise enough to say, ‘We need to stop how we’re doing things so we have water for the future.’”

In Tucson, Arizona, for example, developers will soon have to supply half of the water used in landscaping from harvested rainwater.

Across the border in Nogales, Mexico, watering lawns is only allowed on certain days.

And a growing number of people on both sides are recycling “gray water,” for example using water from dishwashers and laundry machines to water their lawns or wash their cars.

But Zamora, who’s also an advisor to the international commission that’s renegotiating the treaty, says saving places like the Cienega will take more than goodwill and local efforts. He says it will take a comprehensive bi-national agreement, and that the current process might be the last chance.

“To me, this is it,” Zamora says. “If we cannot reach agreement and secure water for different areas including the Cienega, I’m not sure we’re going to have another opportunity.”

Both sides say they hope to strike a new agreement within 2 years. Neither side will agree to any specifics in a reworked treaty before analyzing the results of the Yuma Desalting Plant’s trial run In May.

With nowhere else to go, the fate of the wildlife that depends on the Cienega de Santa Clara hangs on the outcome of the negotiations.