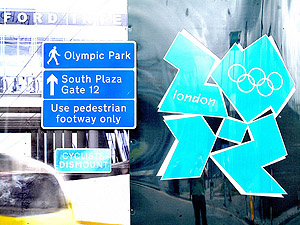 The Winter Games in Vancouver drew to a close on Sunday. Next up is London, the host of the Summer Olympics in 2012. The city won the Games in part by promising to transform London’s blighted East End neighborhoods. But those Olympic pledges are now faltering in the face of the country’s continuing financial woes.

London’s winning bid was slick, ambitious and full of lofty promises that employed words like "legacy." The legacy isn’t just about sports; it’s also supposed to lead to a makeover for some of the most deprived neighborhoods in London. The physical metamorphosis is under way in East London. There are building cranes and shelves of sports venues spread across a huge construction zone. And right here, the future athlete’s village.

"These are like 300 flats here," said a construction worker. "And this block here, this first block, that’s 300 flats there. Then you’ve got like flats over the back and these ones are going to be flats over there as well."

Olympic host cities have promised change for poor neighborhoods before. Take Atlanta in 1996.

Gavin Poynter of the University of East London, who's studied the history of Olympic bids, says London should learn from Atlanta, where such promises fell short. "Many of the social dimensions that Atlanta sought to achieve, particularly the redevelopment of the inner city for black and Hispanic people, that redevelopment still served commercial rather than social interests."

And, Poynter says, there are worrying signs for London’s ambitious goals. "Can these promises then be delivered; and, of course, within a tight financial context of post-credit crunching recession. The issues remain as to whether the development of East London will be facilitating a true kind of social transformation in the way that the planners wish."

A recent report prepared by City Councilors warns that without proper funding and clear rules for builders and developers, the dreams for East London will be dashed.

Dee Doccey chairs the committee that wrote the report. "Too few of the jobs have gone to local people," she said. "Only four percent of the workforce are people who were previously unemployed from the local area. No guarantee that the housing will go to locals rather than wealthy newcomers to the area. And the risks that many of the Olympic venues could become white elephants."

Across from the construction site, a local man is already fuming at what he sees as a waste. "In the amount of money they’re spending over this -- ridiculous," he says. "You could have spent that money on a couple of estates in Hackney, in and around London, and sort out people’s lives for the longevity ... but you spend a fat amount of money for entertainment. It’s a joke. So that’s how much you consider me? Yeah, but yet you can spend eight hundred to a billion pounds just across the road and I’m supposed to be happy about it."

Actually the price tag is many more billions than that. East London and its residents have struggled under the weight of poverty and crime for a century.  The Olympics on their doorstep may be a cause for celebration, but the pledges of greater prosperity after the party is over may disappear under the weight of Olympic debt.