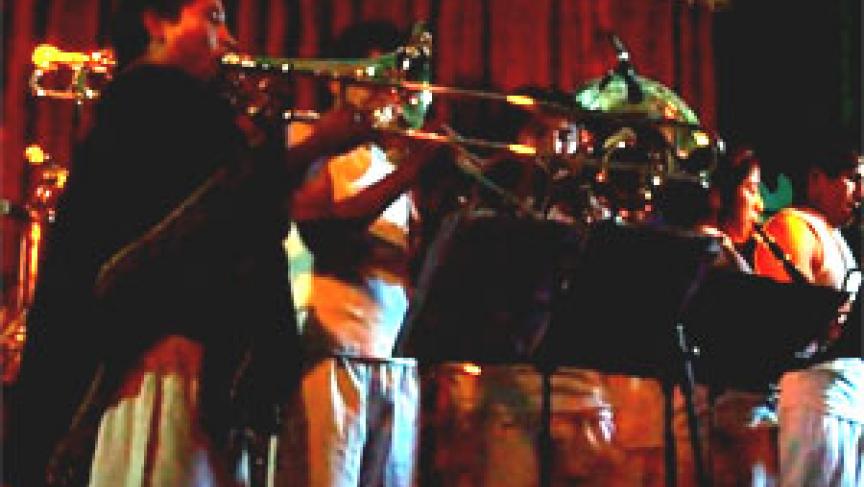 Santa Maria Tlahuitoltepec sits on a cloud-cloaked mountainside in northeastern Oaxaca. Most of its 9000 residents are subsistence farmers or poultry breeders. On paper, Tlahuitoltepec is like many towns in southern Mexico.

But a closer look reveals some differences. First, this town still has plenty of young adults, a demographic that has otherwise left small towns like this one in search of work in the cities or in the US. And then, there’s the music.

The town's large municipal band practices in the afternoons near a gazebo crowned by a metal G-clef symbol. Local resident Florina Vasquez Núñez estimates that around 70 percent of the town’s population knows how to read music.

Then, she says, there are those who can’t read the notes, but can play by ear.

Youth and music literacy converge at Tlahuitoltepec’s Center for Musical Training and Development of Mixe Culture. Mixe is the indigenous group that most people in the town belong to. The conservatory offers a top-notch musical education -- along with middle and high school coursework -- to some 120 mostly indigenous boarding students. More than 100 local people attend free afternoon music workshops.

The school’s director, Damian Martinez says music accompanies all major life events here, from christening parties to funeral processions. He argues the presence of a band is so important that party hosts are more likely to scrimp on the food than to forego the live music.

These traditional celebrations sustain many of the region’s musicians. That, and giving music classes.

He explains that while pianos are favoured teaching instruments in many formal music schools, the conservatory here prefers guitars. They’re lighter and more portable, he explains, and pianos can be hard to find in many communities. But there are other instruments as well.

She says she’s learning a lot at the school, including singing by sight-reading, breath control, and instrument maintenance.

Viviana wants to continue her education in Mexico City. University-level music instruction is one of the options for conservatory graduates. Some return to their communities to form bands, others become music teachers, and a few join symphony orchestras.

Thirty-year-old trombone player, composer and arranger Leovigildo Martinez did all of the above.

He wasn’t planning to move back to Tlahuitoltepec after growing accustomed to city life, but the invitation to teach at the conservatory here was an offer he couldn’t refuse.

Leovigildo Martinez now directs Banda RM, a group that has reinvented traditional regional music by fusing it with elements of ska, jazz and rock. Most of its members are in their 20s and live in Tlahuitoltepec.

Martinez says they’re not just creating a new style of regional music, they’re trying to show that it’s possible to make ends meet in a rural town without having to migrate. The most regular source of income for the band and other musicians here is the circuit of family, religious and town-based festivities. So it seems the musical education available in Tlahuitoltepec not only acts as a job training program in an economically marginalized area, but also helps to keep the town’s social fabric strong.