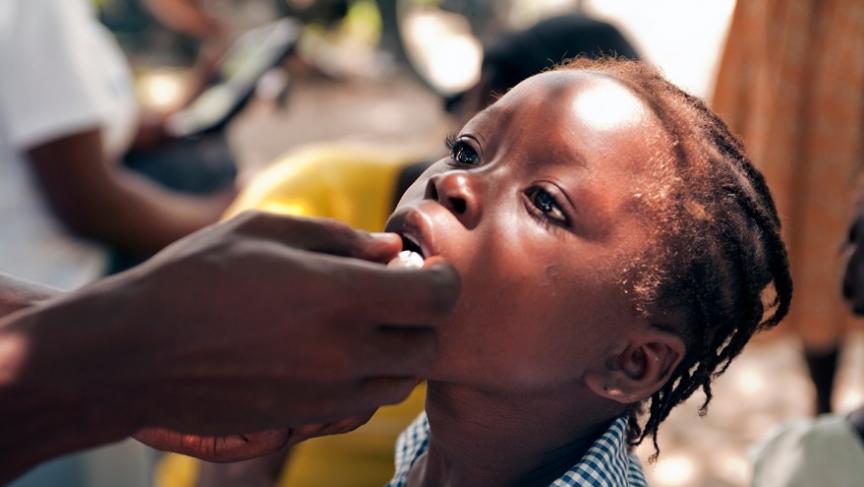 Editor's Note: This story was published after the Haitian earthquake of January 2010. Reporter Sheri Fink discussed the story in an interview with The World’s Carol Hills on Oct. 11, 2013.

The medical needs in Haiti are so great, and the resources often so limited, that doctors and nurses working there since the earthquake have had to make some wrenching decisions. They've had to choose not only who they could save, but who they could not or would not save. Reporter Sheri Fink brings us a rare behind-the-scenes look at an American field hospital in Port-au-Prince in the early weeks of the disaster. 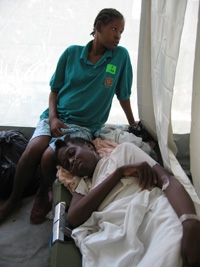 Nathalie LeBrun, in cot with niece Metalienne Anestal. She was a patient at HHS-Gheskio field hospital in Port-au-Prince.

Doctors and nurses who volunteered in Haiti right after the earthquake faced extreme challenges. Working in the heat, with few of their usual tools and the constant fear of aftershocks, they doubtless saved thousands of lives and limbs.

But something else took place in the field hospitals in those early days of the disaster… something that medical personnel rarely face or discuss. Decisions were made to deny or even take away life-prolonging resources from some patients - ostensibly to save others.

This is the story of one such decision.

It took place at a field hospital housed in tents on a college campus courtyard in Port-au-Prince. It was operated by the U.S. government's National Disaster Medical System. One patient who arrived at the field hospital the week after the earthquake was identified in medical records merely as Jane Doe 326. But her real name:

Nathalie LeBrun. She was 38 years old… dressed in a white nightgown with lacy trim. Through a translator, she explained that she had trouble breathing.

“She can't breathe right, and her body's swollen. She's been like that for a while, but ever since the earthquake, it's added onto it.”

The U.S. medical team found a tank of oxygen and ran a tube to her nose to help her breathe. But overnight the tank ran out. The oxygen level in LeBrun's blood plunged dangerously low. 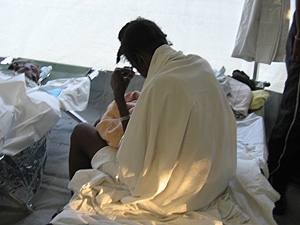 Nathalie LeBrun early one morning after her oxygen ran out. Shorty afterwards a tank of oxygen was found for her.

In the early morning, a nurse sat with her in tears. She believed she was watching LeBrun die. The nurse had been told there was no more oxygen. Doctors called for help. And the staff found another tank.

Again, they hooked up Nathalie LeBrun to oxygen, and her breathing eased. She described later what it had felt like to go without oxygen.

"I felt terrible," she said. "Terrible. My chest hurt. I couldn't breathe at all."

Still, oxygen was running low. The medical team had another idea for how to help LeBrun. They put her on a portable oxygen concentrator. The machine extracts oxygen from the air. But the machine kept overheating and shutting down.

And the device runs on electricity and the fuel needed to run the electric generators was in short supply.

Logistician Matt Hickey passed that news to his medical colleagues at a morning meeting under a mango tree.

"We're at a critical level with our diesel supply. We have one can per generator left. After that everything shuts down. So I'm freaking today. I mean, I am freaking." 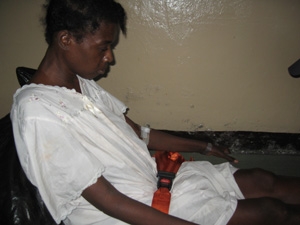 Nathalie LeBrun on a stretcher awaiting transport to University Hospital. She is too short of breath to lie flat.

The team found more fuel, but 24 hours later, bottled oxygen remained scarce. The field hospital's liaison officer was a nurse named Patrick Kadilak. His job was to manage the flow of patients through the hospital, and he said he faced a quandary - what to do about Nathalie LeBrun.

Her breathing difficulties were likely caused by a chronic heart problem… and her need for oxygen might continue indefinitely.

"We're running out of oxygen. We don't have any logistics support to be able to provide us oxygen. I only have so many people that I can treat, and I have to make a decision about what this resource is going to be used and how it's going to be used."

Kadilak reasoned that the limited supply of oxygen would be better used if it were given to those who needed it only temporarily for instance, people who'd been injured in the quake and needed oxygen during surgery.

So he made what he described as a difficult decision: to withdraw the oxygen from Nathalie LeBrun.

"Which essentially is a death sentence for this woman."

Kadilak checked his decision with the head doctor. The doctor agreed it was right. A plan was developed. LeBrun's oxygen would be turned down slowly. And she would be driven to a partially destroyed Haitian hospital where she'd been treated before, but which was known to lack oxygen. 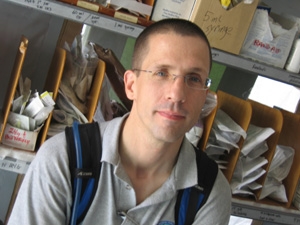 LeBrun was not consulted or informed. She was only told that she would be transferred to the Haitian hospital. That afternoon, she gave me a huge smile and spoke hopefully about her future.

"She's saying hopefully when she gets well, she pray to God she will have an opportunity to learn something, that she will be able to earn a living for herself then she don't have to depend on nobody to really help her because that's why she's really hoping for."

By late afternoon, nobody had started to wean LeBrun from her oxygen. Staff had been busy caring for patients with broken bones, complex wounds, and two women giving birth simultaneously.

Then, shortly after 5pm, a hospital staff member abruptly unplugged LeBrun's oxygen concentrator. Medics from the 82nd Airborne had come to transport her. Not knowing the plan, they tried to reassure her.

"…Just tell her she'll be taken care of, and she's going to be going to another place…"

Then they hoisted her into the back of a humvee ambulance. Before the ambulance even started rolling, a military doctor noticed LeBrun was beginning to have trouble breathing. 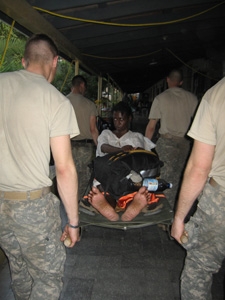 Paratroopers from the 82nd Airborne carry Nathalie LeBrun to a military ambulance.

"…How you doing sweetheart?"

The ambulance had an oxygen tank available, but a nurse from the field hospital's command staff assured the doctor that LeBrun's problem was chronic, and no oxygen was provided for her.

With the doors shut, the back of the ambulance was hot and dark. The ride was rough.

LeBrun began struggling to breathe. She leaned toward the metal side of the humvee and coughed again and again. She was going into acute respiratory distress - a severe breathing crisis. And LeBrun knew exactly what she needed.

Medical staff who later found her gasping for breath in the back of the ambulance were deeply disturbed. They questioned the decision to remove her oxygen. The person who made that decision - Patrick Kadilak - said he understood their feelings.

He had not met LeBrun, and as a member of the command staff, he said he could step back and make a decision based on what seemed rational.

"You feel very God-like or, in that sort of decision making, 'You can have, and you can have not.' And you have to put it in context of the larger perspective of the disaster, as well as the country's ability to be able to support that patient. And it's not an easy decision for anyone to make, but it was the right decision then."

I wanted to know more about the rationale behind these types of decisions.  I asked the chief medical officer who oversaw U.S. government field hospitals in Haiti. Commander Timothy Davis of the U.S. Public Health Service was not involved in LeBrun's case. But he says, in a disaster, it's sometimes appropriate for the medical personnel in charge to withhold resources, because providing care for one patient may deny it to others.

"If you succeed for the individual patient but that patient blocks beds for people that could come in and be turned around and be saved or receive better care, you still have success for that one patient, but you don't know about the others that never made it in there. Not just the patients that are now, but the patients that are yet to come there." 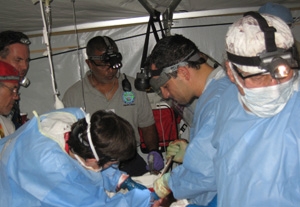 But is this choice between serving the individual patient and the broader community of patients really so stark?

In the aftermath of the quake, Haiti benefited from an outpouring of charity that provided new options for helping the sick and injured. In fact, a few days after Nathalie LeBrun was taken off her oxygen, a new patient arrived at the field hospital suffering from a similar rheumatic heart condition.

In this case, the patient was a 15-year-old boy. He was in critical need of oxygen.  And supplies were still touch and go. A new medical team was now in charge, and whereas the first team had seen no good option for treating Nathalie LeBrun, this new team imagined a different possibility. Doctor Ara Feinstein was on the team.

"Really, the discussion never centered on should we cut back. It just always focused on how can we get more resources?"

He and others came up with a plan. They got the National Air Ambulance company to fly the boy to Florida. He underwent heart surgery at Joe DiMaggio Children's Hospital in Fort Lauderdale on February ninth. His surgeon believes he has a chance to recover fully and live a normal life when he goes back to Haiti. He won't continue to need oxygen.

As for Nathalie LeBrun, whose oxygen was switched off…

When she arrived at Haiti's University Hospital, she was in severe distress and might die, according to one doctor. He said there was no oxygen. But then someone found an oxygen tank.

Natalie LeBrun at the field hospital being prepared for transport to University Hospital.

As Natalie LeBrun waited she began to have difficulty breathing.

Hospital workers rolled it up to her cot and Dr. Bob Norris -- who was volunteering with International Medical Corps from Stanford -- ran the tube of oxygen under LeBrun's nose.
"Okay, mama, here we go. This'll make you breathe better. Okay?"
There was a little bit left. Enough, at least, to last the night.

Update: On February 23, Sheri Fink returned to University Hospital and found Nathalie LeBrun alive and somewhat better. She’s still suffering from a severe heart condition and a doctor says she needs surgery that is not available now in Haiti. But she’s now stable… even without oxygen.