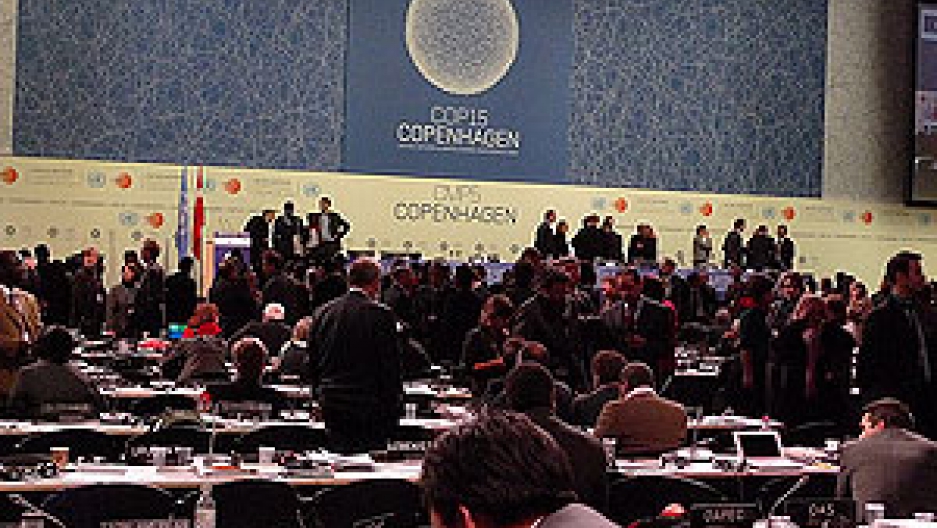 For two weeks 18 thousand people, representing more than 190 nations, came together to work, eat and basically live in the vast Bella Conference Center on the outskirts of Copenhagen.

Government climate change experts have been working on an agreement for years. But midway through this historic meeting the cabinet secretaries and ministers took over. And for the last three days the V-V-I-P's showed up: the presidents, and prime ministers and princes -- each given a few minutes to address the world.

Among the first, Charles, the Prince of Wales: "We cannot have capitalism without nature's capital. We cannot sustain our human economy without sustaining nature's economy."

Prince Charles tapped into what was perhaps the most successful part of these negotiations: REDD, a new U.N. plan that would reduce CO2 emissions from the destruction of the world's tropical forests.

"These ecosystems have been described as the planet's lifebelt and with good reason," said the Prince of Wales. "Not only do they harbor about half of our terrestrial biodiversity and generate much of the rainfall that is vital for farming, they also absorb and hold vast quantities of carbon that would otherwise be in the atmosphere.

"Unfortunately, the forests are being cleared at a terrifying rate. The simple truth is that without a solution to tropical deforestation there is no solution to climate change. As it turns out, it seems that the quickest and most cost effective way to buy time in the battle against catastrophic climate change is to find a way to make the trees worth more alive than dead."

Tony Juniper, who helped write Prince Charles' speech and works for his Rainforest Project, said the Prince has been campaiging on these issues for 40 years. "He looked at the science, he looked at the implications for rainfall for food security -- never mind all the issues we know about for wildlife and biodiversity -- and also his great respect for the world's indigenous communities encouraged him to act."

President Lulu DeSilva of Brazil spoke about protecting the Amazon rainforest, and he put some numbers on the table.

"The Amazon is a great heritage of the people that live here, and that's why [we commit] to reduce its deforestation 80 percent until the year 2020," said DeSilva through a translator. "The Brazilian national congress has just passed my draft bill that has a set of actions that involves fighting deforestation, agriculture, energy, and steel industry. These measures will reduce the growth of Brazilian emissions of greenhouse gas effect between 36.1 percent to 38.9 percent until the year 2020. This effort will cost us $160 billion dollars, that is to say, $16 billion dollars per year until the year 2020. But this is not a proposal that we're putting on the bargaining table, this is a commitment that we are taking as a Brazilian nation, and with the world."

Juniper thinks the fact that the Brazilians are willing to put money on the table bodes well for rainforest initiatives. "So, the fact that the Brazilians are saying this is amazing news for the world; and actually, it sounds like a lot, but it's possibly the biggest bargain in history, in terms of what we get back for relatively small amounts of money. You know, that's not even a fraction of what the British government's just paid to bail out the banking system. This could bailout the entire planet."

The president of Indonesia also put some numbers on the table.

"In the spirit of thinking outside the box, in September of this year, Indonesia declares [an] emissions reduction target of 26 percent from business as usual, by 2020," said President Susilo Bambang Yudhoyono. "This can be increased to 41 percent with enhanced international assistance. As a non-annexed ... country we did not have to do this, but we read the scientific warning of the IPCC. So, we set out new reduction target because we wanted to be part of the global solution."

Indonesia, along with Brazil, account for most of the current global deforestation, and Juniper calls it an "amazing offer." "So, we need money now, and it was wonderful yesterday to see a group of countries coming together and saying that they would be prepared to pay, in the next few years, a substantial sum to countries that are embarking on reversing the deforestation pathways they've been on."

President Obama has pledged a billion dollars of the $3.5 billion projected for this initiative.

Many leaders made impassioned speeches in Copenhagen. The one from the President of the Republic of Maldives, Mohammed Nasheed, had an emotional appeal.

Stephanie Tunmore, an organizer with Greenpeace International, says it's a very emotional issue for small island states. "Because basically, they're negotiating their survival, this is not just an exercise in moving chess pieces around a board for them. And as one of the island representatives said, they could become stateless by the middle of this century."

The Prime Minister of Marshall Islands, feeling frustrated that the process has not yielded enough to really protect the Islands, threatens to take the issue to the international court of justice. He says his country is the subject of environmental crimes.

"I feel his pain, I really do," said Tunmore. "I think it's an indictment of the industrialized world that he feels compelled to do that, to seek justice through the courts. And it is criminal, the way that the rich countries are behaving. They created the problem, we've had negotiations now since Kyoto, since 1997, we've had a four-year process followed by a two-year process where countries have constantly committed to doing things that they end up not doing. And I think we're seeing desperation now from those countries that they're fighting for their survival -- there's no question."

Promises made, promises broken. That was the message from the president of the West African nation of Senegal, Abdoulaye Wade.

"When I talk about promises I can say that I've attended many G8 meetings," said Wade through a translator. "If I count up all the sums promised it's at least $200 billion dollars. Where are they? And when have they been implemented? That's why I'd like to say that it's all very well to have discussions, but I'd like to come down to our experience in Senegal. I don't want to wait for promises any longer, I want to seek original solutions and as the great Greek philosopher said, I want to prove movement by actually walking. That is to get down to business."