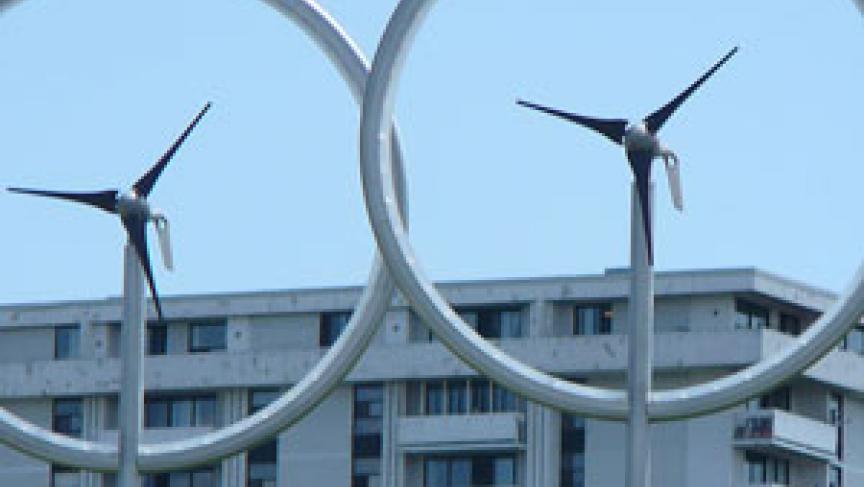 A pair of windmills near the Ontario Science Centre. (Image by Flickr user torontodailyphoto (CC: by-nc-sa))

Negotiators are in Copenhagen for climate talks, armed with all sorts of pledges to cut their countries’ carbon dioxide emissions. In North America, though, the switch to cleaner energy has been slow to take hold. The U.S. and Canada remain the highest per capita CO2 emitters among major economies.

But the Province of Ontario, Canada’s largest, is hoping to chart its own course on energy. It recently adopted what supporters call the most ambitious climate change policy on the continent.

At the Bethel Islam Mosque just north of Toronto, Ijaz Rauf shows off an array of solar panels. Rauf is an environmentalist by nature and the Mosque’s Educational Director by profession. Three years ago he installed this small photovoltaic system to help power the community’s exhibition center. Now, he’s got much bigger plans for solar energy.

"We are planning to put up a project with 200 solar homes, and tie it to the grid to sell the electricity to the government," Rauf says.

Rauf’s project would cost each homeowner about $25,000. It’s a big upfront investment, but it suddenly makes long-term sense. That’s because the local utility company will now pay the homeowners eighty cents for each kilowatt hour of electricity they produce for the next twenty years.

Rauf and his neighbors are hoping to benefit from Ontario’s ambitious new clean energy law. The Province plans to shut down all of its carbon-intensive coal-fired power plants within just five years, and replace them with a wide array of carbon-free renewable energy sources.

"Mr. Chair, the Green Energy Act would, if passed, truly make this Province North America’s green energy leader," said Smitherman. "The Act has two equally important thrusts. It would make it easier to bring new renewable energy projects to life. And it would help us to create a culture of conservation to encourage all Ontarians to use less electricity."

The idea is to spur investment in everything from small home solar arrays to bio-gas plants to large offshore wind farms.  Ontario hasn’t set specific targets for electricity from such new renewable sources.  Energy Minister Smitherman says he’ll take as much as people want to build.  But observers say the amount could reach 10 to 15 percent of Ontario’s electricity supply within just five years.

"The scale of some of these projects is quite large," said Warren Mabee, an Energy Policy Analyst at Queen’s University. "So you could get wind farms that are producing power for a million plus homes. You could get bio-energy plants that are producing hundreds of megawatts. And I think that with rooftop solar, we could see a lot of homeowners taking their homes essentially off the grid."

If Mabee is right, only the European Union would generate more.  If the expectations are high, Mabee says Ontario begins with some significant advantages.  Among other things, the Province is huge, sparsely populated, and blessed with a lot of renewable energy resources.

"We have a lot of biomass, we have lots of rivers, and we have some of the greatest wind potentials in the world.  We also have some great solar potential," said Mabee.

Then there’s the fact that Ontario already doesn’t rely much on coal. It gets only 18 percent of its electricity from coal, compared to roughly 50 percent in the U.S.  But the new Green Energy Plan won’t come cheap, and critics say that could be its downfall.

Ontario’s aging power grid was built to carry electricity from huge central power stations, whose output can be regulated as needed.  Now, the grid has to be refurbished to bring in power from many more sources, large and small, and often intermittent. That’s going to cost billions.

"My concern is that we’re going to be building an energy system that from a cost point of view might be one that shocks Ontarians," said John Yakabuski, energy critic for the Opposition Conservative Party.

He says that’s a lot to pay for a plan that would reduce Ontario’s carbon emissions by just 14 percent. "If other jurisdictions do not opt for the same kind of choices, which lead to the same kind of prices, we could find ourselves at a competitive disadvantage."

The Liberal government responds that growing international pressure to cut carbon emissions will push up electricity costs everywhere. So, Ontario is just getting ahead of the game. And the Green Energy Plan also includes conservation measures designed to cut electricity use by 20 percent.  So as the cost of electricity rises, the hope is that consumers will be using a lot less of it.

For his part, Ijaz Rauf at the Mosque near Toronto says he’s convinced his solar project is worth pursuing. "If you look at these houses they’re wide roof areas facing south, making it ideal for solar PV technology.  And there are rows and rows of houses like that."

And Rauf expects that the new law will spur many more across Ontario to follow suit.