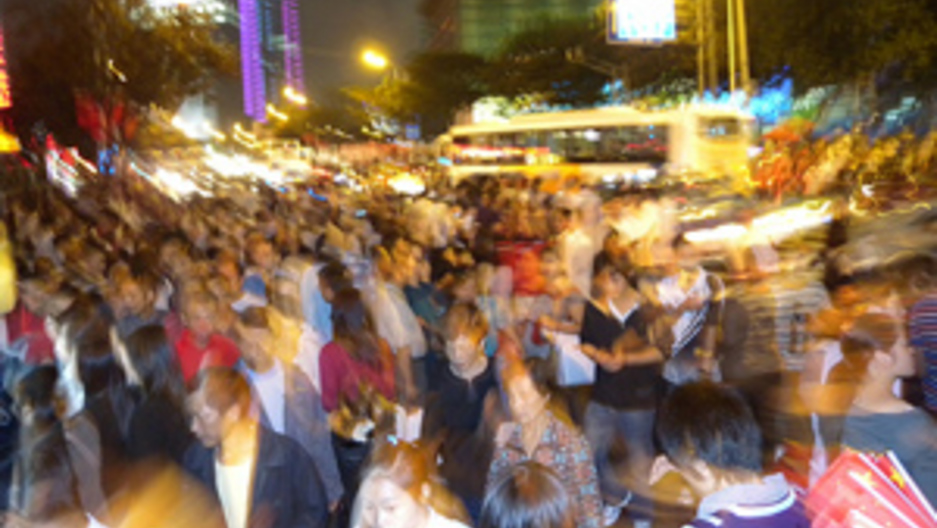 The People's Republic of China officially turned 60, and celebrations there included a massive military parade with tanks, missile launchers and soldiers; and later there was dancing and fireworks.

China has grown beyond recognition in the past sixty years: an agricultural society transformed into a land of skyscrapers and cell phones. The population has more than doubled. The country’s GDP has grown nearly 80-fold. Chinese officials say what the country used to produce over a whole year can now be done in single day. Sometime next year, China could become the world's second largest economy, passing Japan.

China invented paper, printing, the compass and the seismograph. China was among the first to harness fossil fuels, and map the stars. And then, about 500 years ago, it lost its innovative edge.

Now China hopes once again to lead the world in creativity. China's ruling Communist party wants to build a more innovative economy but it's used to governing through decrees and five year plans and that's a hard habit to break.

The party has spent billions in the past decade on research labs but it's given scientists strict guidelines to come up with new ideas. The results have been mixed at best.

One of the success stories is a company called CapitalBio. Framed patents line the walls of the company's reception hall. A glass display case shows off its biochip products for use in medical care.

Keith Mitchelson is CapitalBio's Vice President for Marketing and the company's sole non-Chinese employee. He says CapitalBio is working on a technology that would allow doctors to use these bio chips in their clinics, to conduct tests normally done by large machines, with long waiting times for results.

CapitalBio is located in the government built Zhongguancun Science Park. Z-Park as it's known, is in the same leafy corner of Beijing where some of China's top universities are based. In fact, CapitalBio is a private company spin-off from one of them, Tsinghua University.

Xia Yangqui is a Beijing municipal government official and the deputy director of the science park. He says the kind of innovation you see at Capital Bio is what the government had in mind when it created the Zhongguancun Science Park.

"Z-Park is the high tech concentration area and also serves as an incubator of high tech businesses," said Xia.

Xia hopes that China's version of Bill Gates comes out of this park. He says many companies, Chinese and foreign, have opened research and development centers here and total production value has increased fifteen fold to one hundred and fifty billion dollars during the past decade.

There's no denying that China has made sizzling economic progress in recent years. Most Chinese now have mobile phones and that includes farmers, even some living in caves.

More Chinese are now online than Americans, and when new technologies come up elsewhere, Chinese are quick to copy them or tweak them for the home market and get them out to the masses. It happens so quickly that some Chinese can get confused about who created the technology in the first place.

Chinese Academy of Sciences official Lu Yonglong seems to be among the confused. When asked what major inventions have come out of China in the past couple of decades, he said, "DVD, the first generation of DVD was developed in China. CDMA. And flash disk."

Actually, the DVD was invented by a consortium of Japanese, European and US companies. An Israeli developed the flash disk.

But the Chinese did embrace both technologies early and enthusiastically. And Chinese innovators have found ways to improve many such technologies for the Chinese market. That's reflected in the fact that China had more than 800,000 patent applications last year, and granted almost 200,000 patents. The problem is that very few of those patents were for break through technologies.

"In American history, Edison invented the light bulb and it changed how people live," said Yin through a translator. "Nowadays, it's not easy to find [those] kinds of Chinese inventions. In China, it's more about a specific technique and improving the current techniques."

Yin says modern Chinese innovation has come a long way since he started working in the patent office thirty years ago as a young engineer. He believes more important inventions will come as more Chinese get up to speed with international knowledge and international standards. He says it helps that the government is committed at the highest levels to making this happen.

Premier Wen Jiabao has said as much just this month when he spoke at the world economic forum in the northern Chinese city of Dalian: "We should see scientific and technological innovation as a powerful engine of economic growth and rely on it more to make economic progress.  We will transform China into an innovative nation."

China has made innovation a priority for a simple reason. It provides more sustainable growth than just manufacturing innovations from other countries.

Duncan Clark is chairman of BDA, a high tech investment advisory firm in Beijing. He points out that IPODS are made in China, but China doesn't make much money from them.

"For example, on a $200 sale of an iPod, perhaps five dollars of value is left for China. Most of the value goes to Apple for the brand, for the distribution. Some of it goes to the components suppliers who mostly are Japanese, in the case of iPod. So China rightly, I think has been saying we don't want to be just the manufacturing workshop where pollution is left behind and labor unrest, when the economy of the US turns down. So China is struggling to move up the value chain and they're absolutely right to be focusing on greater value."

But Clark thinks they're less right in how they go about it. The government throws lots of money at science parks and infrastructure. Researchers are ordered to innovate on deadline and file patent applications and journal articles if they want to keep getting funding. That leads to quantity but not necessarily quality. The pressure had led some researchers to plagiarize, fabricate data and generally cut corners.

Another problem is that government-run research labs have a hard time staying current with what consumers want. On top of that, some of the government led effort is infused with a nationalistic Chinese innovation for China approach. Clark says that's self-defeating.

He cites as an example, the Chinese government's costly effort to come up with a new high speed mobile broadband standard:

"China, about ten years ago, was frustrated with the dominance of companies like Ericson, Alketel and Motorola in the Chinese market and thought that we could never compete head on in Western technology. We need to create our own indigenous standard and by effectively walling off the Chinese market; we would be able to create a big enough market for a national champion or champions to emerge and then they could export based on the size of the Chinese market.  This was the plan."

The reality, Clark says, is that the plan has failed miserably because nobody outside of China has made phones that use the Chinese standard.

Liu Jiren is the chairman and CEO of China's largest software development and IT company, Neusoft. He told an audience at the world economic forum in Dalian that it's time for China to change its approach.

Entrepreneurs like Liu say there's a better way forward than just pouring money into infrastructure and staking national prestige on whether China comes up with its own exclusive standard. They say the government should focus on improving the climate for innovation: ramp up intellectual property protection so the inventors reap the rewards from what they create, rather than the pirates; improve how the stock market functions so start-ups can get the cash they need; and put more effort into understanding the needs and the strengths of the private sector.

A gap in that understanding became apparent when a Chinese journalist asked China's minister of science and technology, Wang Gang, a question at the world economic forum.

She said [translated], "small private companies don't have as much capacity for innovation as big companies, so what are you doing to help them?"

That prompted this response from James Turley, the chairman and CEO of Ernst & Young: "My experience around the world is not consistent with the premises of the question."

Turley said from what he's seen, it's the small private businesses that innovate more than the big bureaucratic ones. "I think the magic of progress is when we can in a collaborative style, bring together the innovation and the vision that comes from nimble entrepreneurs with the power and the education in both the academic community and the state sector."

Minister Wong nodded politely but he didn't look convinced. After all, when China's one-party state decides it's going to do something, things generally happen; like now when the government is throwing its effort into building renewable energy as a leading industry.

China's Communist party has come a long way since its hard line Maoist past. But some habits die hard, like a lack of faith in the private sector and a preference to let the state sector lead. For China to become the innovative nation its leaders want it to be, it will have to do more than build infrastructure and graduate engineers. China will have to rethink old assumptions and find new ways to fertilize the roots of innovation.