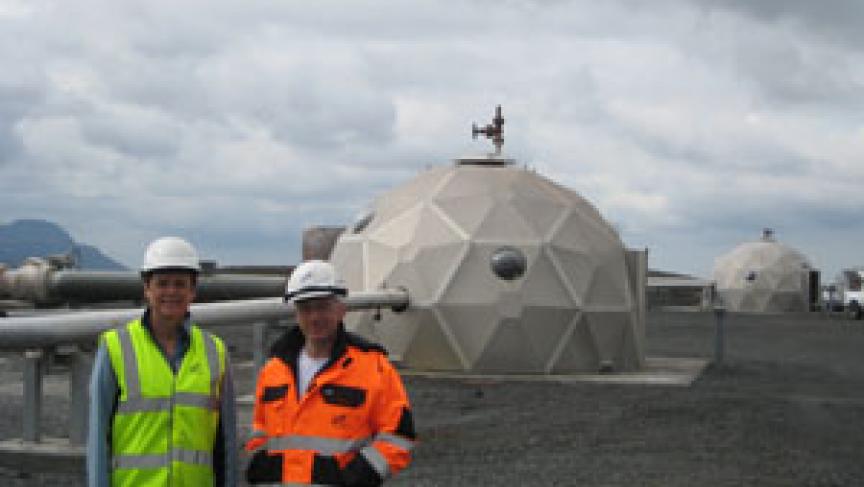 In the past year Iceland has been in the news for all the wrong reasons. First the banks collapsed, then the economy, and then the government. But here’s something that survived -- a research project aimed at removing excess carbon dioxide from the atmosphere and storing it beneath the earth’s surface. CO2 emissions contribute to climate change and rising sea levels and many countries, including the US, are investing millions to develop so-called CO2 sequestration technology. The project in Iceland is especially promising.

Driving southwest from Reykjavik, Iceland’s capital, the land looks like crumbled Oreo cookies – miles and miles of them strewn beneath a steel-gray sky. The volcanoes that formed Iceland spewed out hot magma which cooled into a porous black rock known as basalt. Iceland is 90% basalt and scientists here think all that rock might be as good as gold in the fight against global warming. The key – like so much else on this volcanic hot spot – may lie underground.

"Actually they’re drilling and tapping off energy from the volcano and the heat has been here for thousands of years and we can expect the heat to be here for other thousands of years," says Almar Sigurosson.  He works forks for Reykjavik Energy,the company that taps the steam and boiling hot water that surged through the rocks beneath this volcano to produce enough electricity for two thirds of Iceland’s population.

He continues, "This is bore hole that goes down three kilometers. And from these bore holes, there comes mixture of steam and water and the steam then goes to the power plant and turns the turbines."

This is the kind of clean geothermal energy that environmentalists love. But along with the steam this plant also releases a small amount of naturally-created carbon dioxide, a key greenhouse gas. That led company officials to start thinking about how they might be able to capture and store that CO2 to keep it from adding to the global warming problem. The answer, they realized, might lie in the very rock that harbors the steam and hot water – Iceland’s ubiquitous basalt.

"When these types of rocks are exposed to air then they react with the air and with rainwater and the process is called weathering. And the minerals – they get decomposed because of that weathering process," says Juerg Matter. He’s a geologist at Columbia University’s Lamont-Doherty Earth Observatory.

The weathering process he’s describing is important because basalt doesn’t just decompose. The minerals in the basalt bond with CO2 to form new carbonate rocks transforming the CO2 from a gas to a solid in the process. The reaction is exciting for scientists and CO2 emitters alike because it keeps CO2 out of the air virtually forever. And there’s more good news. Basalt is the most common rock on earth. Juerg Matter says there’s potential to capture a significant amount of CO2 by pumping it from power plants into underground deposits of basalt around the world.

"We could basically sequester – the estimates are – a billion tons of CO2," he says.

The project backers say the potential could be much greater. The reaction between basalt and CO2 happens extremely slowly in nature. But Matter hopes the deep injection process will help speed it up. That’s where the geothermal plant in Iceland comes in. It’s the first real-world test site of this sequestration concept.

Holmfriour Siguroardottir works in Reykjavik Energy’s Innovations Department which has partnered with Juerg Matter and other scientists on the project.

"Right now we are approaching the injection wells where we have been doing all this preparation work. You can’t so much on the surface. Everything is happening below the surface."

A couple of white tubes stick out of a patch of brown earth – only a hint of the giant science experiment that’s about to begin beneath our feet. Starting this weekend Siguroardottir says her company will begin pumping a mixture of ground water and CO2 from the geothermal plant 600 meters down the white tubes into the porous basalt below.

"That will seep into the basaltic rock where it will react with the minerals in the rock and we are aiming at forming carbonates – carbonate minerals – where it will fixed. It will be there as a mineral not as a gas," says Siguroardottir.

That is important because the big criticism of other carbon sequestration schemes is that the carbon would be stored as a gas which could escape back into the atmosphere. About 200 meters away from the injection tubes two other bore holes will allow researchers to take samples of groundwater downstream. They’ll analyze the water to find out how much CO2 has bonded with the rock; how much new rock is being produced; and how fast the reaction is taking place.

"So that’s a major step in the right direction – to be able to actually monitor what’s going on in time," according to Gordon Brown, a geology professor and Stanford University. He’s been studying the problem of CO2 sequestration for 40 years. That’s longer than most scientists have even recognized that rising levels of atmospheric CO2 are in fact a problem. But Brown takes heart in the possibility that the Iceland research could lead to a breakthrough.

"It’s an old problem and it’s exciting to me that finally we’re starting to actually do things that might lead to some solution. Ultimately we need to fix this problem and I’m beginning to see the hope that it might actually be fixed within my lifetime."

This CO2 solution isn’t yet set in stone. Knowing how the basalt reaction works in the real world is only a small part of the puzzle. Among the big questions are how to minimize the need for large amounts of water as well as the possible seismic and ecological impacts of altering the rocks that make up the very ground beneath us. But many in the field think this kind of research has a lot of promise.

Anyone who figures out a safe and reliable way of locking up CO2 emissions could be in a position to make a lot of money as countries start to crack down on greenhouse gas pollution. Siguroardottir says that’s also part of the company’s thinking.

"Of course in the back of our head we look at it as a business opportunity. But let’s see how it works out."

The first tests of Iceland’s experiment are scheduled to begin this weekend.