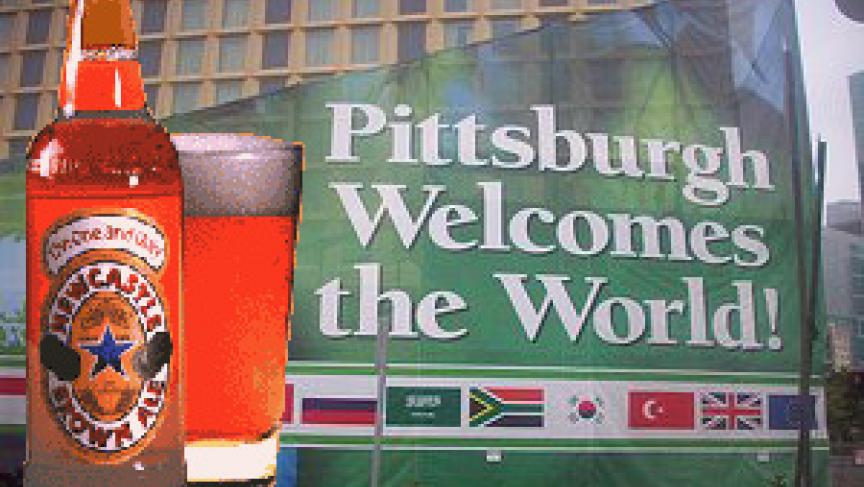 Story by Jason Margolis, "The World"

World leaders gathered at the G20 summit in Pittsburgh did what everyone expected them to do: They discussed ways to get the global economy back on the path to sustainable growth. And they drafted statements promising to solve the globe's biggest trade problems, soon. How very macro-economic of them.

But if we want to get a little more micro, we'll have to look at the other Summit that Pittsburgh hosted: the Beer Summit, put on by Pittsburgh's World Affairs Council.

It's a chance to sample a few beers from some G20 nations -- and learn a little bit, too. There's a lot you can learn from an ice-cold bottle of suds.

Lesson one: the world economy needs Americans to drink more foreign beer. And use your credit card, please.

Edward Alden at the Council of Foreign Relations says that's the way the world has been operating for many years:

"The United States has, for the last couple of decades, been the major source of economic demand in the world, and that has been an economic engine for Asia, for the Middle East, for Latin America, and to a lesser extent, for Europe.

That model has left the US $12 trillion dollars in debt, which is why President Barack Obama wants other nations to pick up the slack: save less, buy more. For example, it'd be nice for other countries to start buying more American beer.

"Trade is ... if not the elephant in the room, certainly some animal as yet to be defined that's in the room," said Douglas Rediker.

Rediker is with the New America Foundation in Washington. He points to the big trade dispute grabbing headlines right now. President Obama slapped a tariff on Chinese tires two weeks ago, and the Chinese are threatening to retaliate with a duty on American chicken.

Rediker says it's important that the G20 nip this in the bud, "because there is a risk that an otherwise relatively small trade dispute could turn into something very, very major, and could end up being a thorn in a much broader debate."

Something like that happened during the Great Depression. The U.S. Smoot Hawley Act of 1930 raised tariffs on more than 20,000 goods coming into the United States. Europe retaliated, which didn't help anybody's economic recovery.

But what does all this have to do with our modern-day beer example? A lot, if you look deep inside the bottle, at the raw ingredients that make up beer.

Economist Lee Branstetter at Carnegie Mellon University in Pittsburgh says agricultural subsidies have dogged global trade talks for years: "Many farmers in developing countries very much resent being exposed to subsidized competition from the farms of the rich industrial world."

Subsidies provide security for American and European farmers, but they also distort the playing field. In the U.S., the most heavily subsidized crop is corn.

This brings us back to beer and Jeff Becker, president of the Beer Institute in Washington: "The barley folks keep telling us they're losing acreage to corn, as corn has become more important with ethanol production."

Some of the subsidies for corn are designed for alternative fuel. Corn subsidies also provide cheap feedstock for cattle. For the beer maker, this means fewer fields devoted to barley and hops, which can translate into higher beer prices for you and me.

But Lee Branstetter says it doesn't have to be like this. "In the absence of subsidies, there would be less production of some commodities like corn and cotton. And farmers would reorient their production in response to market based price signals, and they would produce more stuff like hops."

However, if the U.S. government cut corn subsidies, many farmers across the heartland would lose a lot of money; some would go broke. Texas State University historian James McWilliams has a potential solution. He’s the author of the new book, "Just Food."

"My problem is not with the subsidies themselves, it’s really what they’re subsidizing," said McWilliams. "We need to preserve our subsidies; we just need to reapply them so that we can keep the right kinds of foods cheap:  fruits, vegetables, legumes, nuts."

McWilliams argues that by keeping corn cheap, we're destroying our environment and clogging our arteries. That's a complex story for another day.

For this story, McWilliams says international organizations like the G20 have a responsibility to foster more fair trade relationships.

Deep breath -- this is a lot to think about from a bottle of beer.

Back at the beer summit in Pittsburgh, brewmeister Hart Johnson at the Sharp Edge restaurant shows off his menu: "Here we have some beers from Samuel Smith in England, we have some from Bellhaven and Traquair in Scotland."

Johnson carries 75 percent imports. When asked why it's so easy to get a Heineken here, but tough to get a Budweiser or Coors in Amsterdam, Johnson posits his own economic theory:

"The reason is the American beers are a bad rap: fizzy, yellow, watery beers."

And that's a problem that all the economic negotiations in the world can't solve.