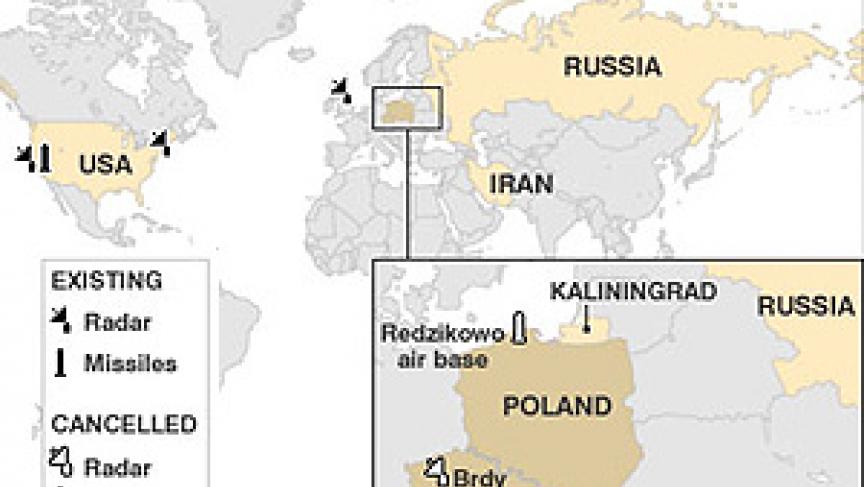 Story by Gerry Hadden, "The World"

So far reaction in Russia and in Europe to President Obama's new missile defense plan has ranged from approval to disappointment.

The farter east you go, the greater that disappointment. The Bush administration had pressed both the Polish and Czech governments to host the missile shield system, and those governments in turn sold the plan at home. Now they're not only losing the system, they're also losing face with voters.

Yesterday the Czech Prime Minister, Jan Fischer, tried to put a positive spin on the news. He said he expects the US will cooperate with the Czech Republic in future agreements on scientific and military cooperation, including financing concrete projects.

"I asked for that in my telephone conversation with President Obama, and he assured me the US will not change its approach in this matter," said Prime Minister Fischer.

Eastern European countries are wary of a resurgent Russia, but just what form any future US military cooperation might take remains to be seen.

Poland reacted more strongly to the news. Yesterday was the 70th anniversary of the Soviet invasion of Poland at the start of the Second World War.

On the other side of the continent, Western European countries had long been skeptical of the missile shield, questioning its technology and destructive effect on relations with Russia.

Russia complained that the shield represented a direct threat to its own defense capabilities.

Senior Russian MP, Konstantin Kosachyov, said his country welcomes America's decision to abandon the shield. He suggested the Bush administration had been tone-deaf when it came to Russia's concern on key issues.

"We never doubted Russia was justified in standing up for more objective assessment of the situation in Iran, and a more responsible attitude to the strategic dialogue between Russia and the United States," said Kosachyov through a translator. "In both these positions, the Bush administration categorically did not understand us. As far I can judge by today's decision, the Obama administration is beginning to understand us."

Michael Emerson at the Center for European Policy Studies in Brussels believes this move will embolden Russia and lead them to pursue aggression against the countries close to home, specifically Ukrane and Georgia.

For more background on the new missile defense plan, visit "The World" website.