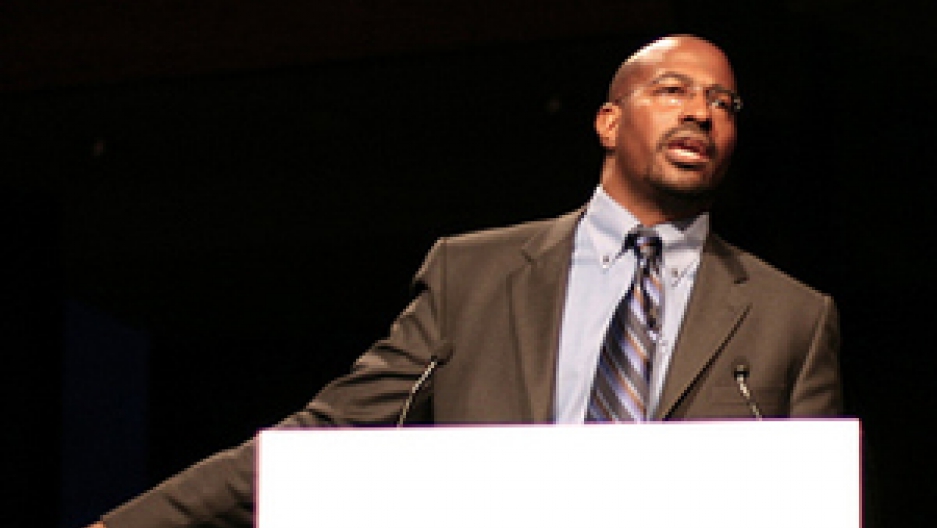 Not long after President Barack Obama took office, he excited environmental activists by making Van Jones a White House special advisor on green jobs. An African American trained as a lawyer at Yale, Mr. Jones built an agency in the Oakland, California area that took off with a campaign for green jobs.

He's a best selling author and an electrifying speaker.

"The people who said we could have a financial strategy based on borrow and spend and bubble and bailout, they've had their turn. They've been totally discredited. It's our turn now. Green jobs now! Green jobs now!" Said Jones last year.

But as soon as Van Jones was on the job he was under attack from conservative commentators like Fox News host Glen Beck.

"Van Jones, Van Jones, he's our green jobs czar. What does that tell you? It says that the president has an agenda that is radical, revolutionary and in some cases Marxist," said Beck.

The pundits dug into his past and found Jones once used rude anatomical slang to describe some Republicans. More damaging, he long ago signed a petition involving the families of victims of 9/11. Among other things, it claimed the Bush White House had some prior knowledge of the attacks. Van Jones says he never saw that petition's full text and not does agree with it.

But a White House spokesman offered little support, and Van Jones resigned over Labor Day weekend. The administration's critics had a victory and its environmental supporters had questions about why Van Jones was let go, and what it meant for the green agenda.

Independent Vermont senator and green jobs subcommittee chair Bernie Sanders says the White House should have fought back, "I was disappointed that the White House caved in quite the way they did to the kind-of ferocious attack that took place against Van Jones from the right wing echo chamber, from Fox and perhaps some other right wing commentators. I would have preferred the White House remained firm in supporting Mr. Jones because, in fact, I think getting rid of Van Jones only whets their appetite, and certainly more will come."

The White House says Jones's decision to resign was his own.

Joe Romm served as an assistant secretary of energy in the Clinton years and now blogs on clean energy for the Democratic think tank, Center for American Progress.

Romm says Van Jones fell victim to a larger -- and increasingly ugly -- political fight over the country's energy future, "The person who claimed credit on Fox News for taking him down, who was this Phil Kerpen from the Americans For Prosperity, you know, was very blunt that they are against the clean energy jobs message. And, you know, he said we need to put not just him but the whole corrupt green jobs concept outside the bounds of the political mainstream. The clean energy jobs message has been a centerpiece of this administration and I think the right wing saw Van Jones as the embodiment of that message and that was an essential reason why they went after him."

According to Romm, the American for Prosperity group is, "A front group for billionaire polluters – I think it's Koch Industries that has backed them. They used to be a pro tobacco industry group that worked to defeat things like smoke free work place. And now they are pushing very hard to kill the clean energy jobs and climate bill that's gonna be discussed in the Senate this fall."

He says he and the progressive community should have paid more attention to Glen Beck's attacks, "It is very hard to know whether to take a guy like Glen Beck seriously. I mean he called President Obama a racist. During the clean energy bill debate in the house, he and this guy from Americans for Prosperity took out a watermelon. They said it was a watermelon bill because it's green on the outside and red on the inside. And so they took out a watermelon and started eating it.

"It certainly has a connotation given that the attacks were on African Americans -- Van Jones and on President Obama. So ... it has certain undertones. And it is absurd to say that advocating green jobs is somehow socialist."

The attack on Jones and his resignation signals dire consequences for energy and climate change, said Romm:

"The polluting industries, you know, like big oil who have been backing groups like Americans for Prosperity, they are opposed to clean energy. And they want to keep us addicted to dirty energy. So, they have, you know, tens of millions of dollars to throw at this and make this very coarse debate. They're gonna go after every single clean energy advocate and they're gonna spread disinformation at town hall meetings and through mailings and phone calls.

"So this is gonna be a very tough battle. Remember we haven't passed clean air legislation in two decades. And we've never passed a climate bill. And we've never passed a clean energy bill like the one that's being considered. So, yes, this is gonna be an epic battle. The forces of status quo make a lot of money from the status quo. And they are gonna use it to block change."