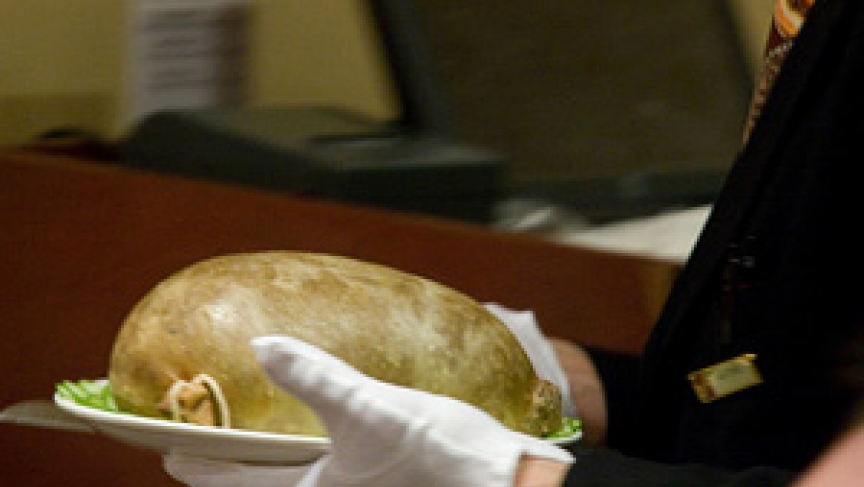 Scotland's most famous dish may not be so Scottish after all.

Haggis is made from offal -- the viscera that many Americans toss out. Haggis consists of the heart, the liver and the lungs all boiled up with oatmeal and seasonings in a sheep's stomach. Not everyone's idea of dinner.

Haggis is strongly identified with Scotland but a food historian says that haggis may first have been eaten in England. She's found a reference to haggis being prepared there in 1615, whereas the earliest mention she could find of Scottish haggis was from 1747.

James MacSween heads MacSween of Scotland, one of the best-known makers of haggis, and he says he's not at all shocked by the news.

"Haggis per se didn't originate in even England. The funny thing is, the Romans or the Vikings are alledged to have brought haggis to Britain," said MacSween.

While contending that haggis didn't originate in Scotland, MacSween stands by his country's -- and his business' -- claim to it. "I feel that we are trying to keep the recipe as authentic as possible. We are still manufacturing it and using techniques that have been, you know, in our family for a few generations. We're still using the natural casing where a lot of producers have now moved to plastic casing because it’s cheaper and easier to optimate, and we go to great lengths to try to preserve its origin and make the product as authentic as it once was."

Unfortunately, haggis can't be exported to the US.

MacSween explained why: "The USDA -- I think is what they're called -- don't recognize lamb lung as a meat that's fit for human consumption, and I've had a letter from them that in their opinion you are liable to contract tuberculosis. Which is quite incredible seeing that offal, you know, in some countries in the world is still considered a great delicacy."

Americans will simply have to travel overseas to get their haggis. MacSween says his business does well with the summer tourists.

"We invented the first commercially available vegetarian haggis," said MacSween. "Twenty-five years ago actually, and it now makes up for about a quarter of our haggis sales.

"I think it's as good. There's quite a lot to it, and it's quite meaty if you know what I mean ... it's got some really good earthy tones and it's equally as tasty. And it's as versatile -- because over here, you know, we use haggis for lots of things. We put it into cannelloni or sprinkle it over our tortilla chips. There's a variety of things you can actually do with it. It's a great component."