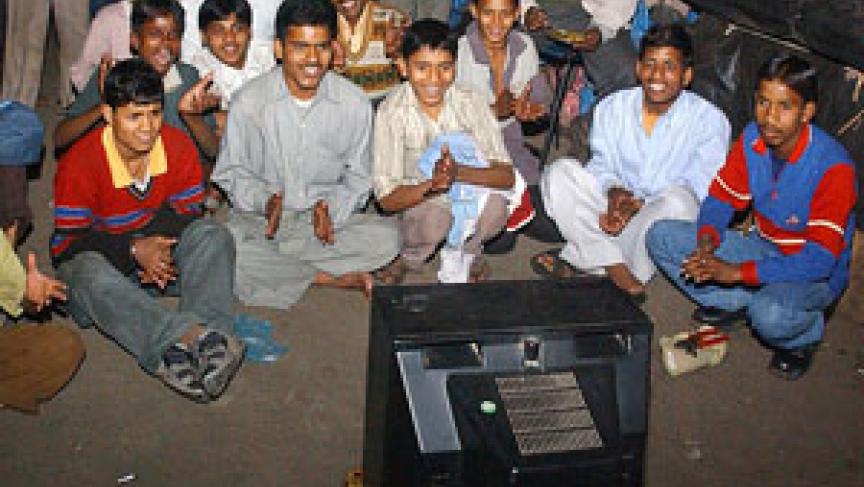 Reality Television is huge in India this summertime. So is the public debate about culture and ethics that reality shows are provoking. One show in particular is stirring up Indians. It’s called "The Moment of Truth." Participants are asked embarrassingly, intimate questions about their lives right in front of their family and an audience of millions. Answer truthfully they win prize money. If they lie they get nothing.

From Mumbai, India, the BBC's Delnaaz Irani filed this report for "The World."

Najma Heptulla is a prominent member of parliament. She says programs like "The Moment of Truth" should be taken off mainstream television in India, "The questions started becoming very filthy kind of questions like whether he slept with a prostitute or he slept with a girl younger than his daughter. Did he cheat [on] his wife? All kinds of things."

And because the channels bombard the viewer with advertisements throughout the day, she has no choice but to watch this very personal spectacle.

"If somebody wants to confess they should confess to the person or to a priest or to mullah or to a Hindu priest -- whatever religion they belong to. But why should I be forced to see it," said Heptulla.

Whether such shows should be confined to special channels or not shown at all, the root of the objection is that they don't sit well with Indian society.

"We are not Britain and we are not America. We are India," said Heptulla. "We have different values and we have a different kind of living system. And I think, looking at our society, it doesn’t match with it at all."

Uvashi Delakia lives in one of the suburbs beloved of Bollywood's elite. She was the actress whose appearance on "Moment of Truth" first prompted MPs (members of parliament) to raise the issue of reality television in parliament.

Delakia says those objecting to these programs simply miss the point, "They are television shows and television is here to provide entertainment. And if you're here to learn something out of these shows, then you're watching the wrong channel. If you really want to learn something read an encyclopedia. That's better -- full of knowledge."

Rajish Camut agrees. He is the head of one of India's leading television channels -- Colors.

"Indian society is becoming far more acceptable," said Camut. "Television as a medium was used as something to escape from the tragedies of real life. Today what happens is you don't mind seeing something that is real on television and accepting it. The Indian audiences are becoming far more tolerant and are open in terms of accepting the kind of content."

O'Neil Dakha is a leading Mumbai commentator. According to Dakha the Indian society that MPs have been so quick to defend has always been a sham, "Indians are human beings. They live like everyone else. They tell lies. They tell the truth. They love their family. They don't love their family. They fornicate. They have extramarital affairs. But we have tried to show the outside world that you know we are morally superior. We occupy some higher moral plane."

Only last week the Indian high court threw out a public petition to have "Moment of Truth" banned. The judge advised the petitioners to switch off their television sets and follow the Gandhian way to see no evil.