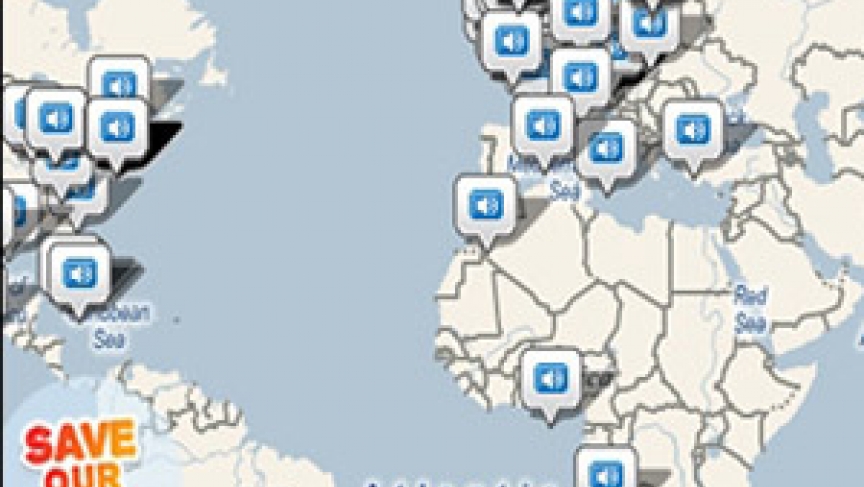 The following is not a full transcript; for full story, listen to audio

"The World's" Marco Werman spoke with the BBC's Kate Arkless Gray about Save Our Sounds.

Gray says there are certain sounds are in danger of becoming extinct: "And I'm not just talking about the sounds of animals or birds that we often hear, you know, as endangered species ... but things like the sound of a 56K modem. It was an everyday sound and now it's gone."

The Save Our Sounds project features an online map, populated with dots indicating short clips of sound from around the world -- from the jungles of Sukau in Malaysia to Charles City, Iowa. It's an audio snapshot of the planet.

View the map and find out how to submit your sound.

A sampling of the sounds you'll find on the map: flying fox bats in Marricville, Australia; a bus terminal in La Paz, Bolivia; a street rally in Kolkata, India; and buskers (performers) in a restaurant in Istanbul.

Anyone can send in sounds says Grey: "Absolutely. We want to get as many people around the world thinking about sound as we can, and we're trying to make it as easy as possible. With this map what you can do, you go online and you can upload the sound to wherever it was recorded and then listen your way around the world through other people's sounds."

Susan Sontag once said that everything has been photographed; but not all sounds have been recorded.

Grey: "... there's an amazing photographic record of the world. We've got huge numbers of books and words written about the history of the world but sound is one of those things that we seem to take for granted. In fact I made a note of every single sound I heard on my way to work one morning and filled two or three pages in my notebook. It was incredible."

Save Our Sounds also takes requests for sounds: "Yeah. We're having a bit of fun with this. We're running something called desperately seeking sounds. So it's a bit like lonely hearts. If there's a sound out there that you miss from your childhood, you know maybe you granny used to take you onto a carrousel and you'd like to hear that sound again. Let us know what the sound is and we’ll try and get one of our sound scavengers out and around in the world to go and collect it for you and we can reunite you with it."

The collected sounds will be archived, according to Grey: "What we're going to be doing with these sounds by the way -- any sounds that get sent into us -- we'll be sharing the sounds with the British library and we're going to offer the sounds for them to sort of look after for future generations."